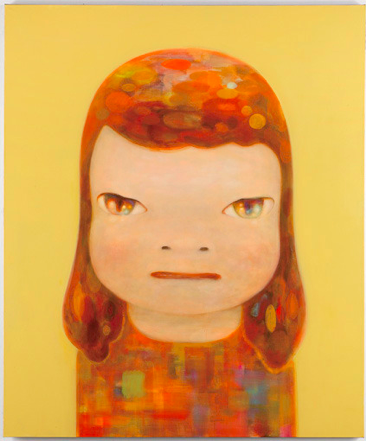 The images of Japanese kawaii have become, at this stage of the contemporary arts dialogue, something of a trope, an analytical signifier earmarking a work for commentary on Japan’s encounters with global pop culture.  Creeping into press releases, catalogues and countless reviews as a convenient sounding point for Japan’s obsession with the bizarre and the cartoonish, the use of the word often leaves something to be desired, doing little to quantify the aspects or implications it actually carries. 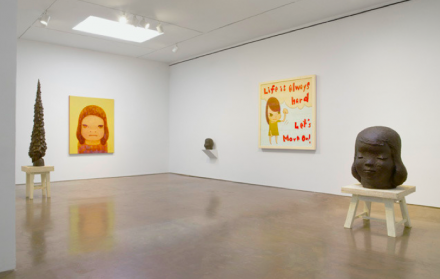 This understanding, or perhaps more appropriately, deliberate misunderstanding, is at the core of Yoshitomo Nara’s work, currently on view at PACE Gallery’s 534 W. 25th Street location in New York.  Enormous busts and paintings explore the soft, contoured features of a young girl over and over again, quite clearly painted in the style of contemporary Japanese manga, all big eyes and round-faced innocence, but hold back from fully committing to this stylistic approach.  The characters are definitely Japanese, bearing a familiar, unobstructed childishness, but, at the same time, often possess a subtle, placid expression or mild irritation that refute any immediate contexts. 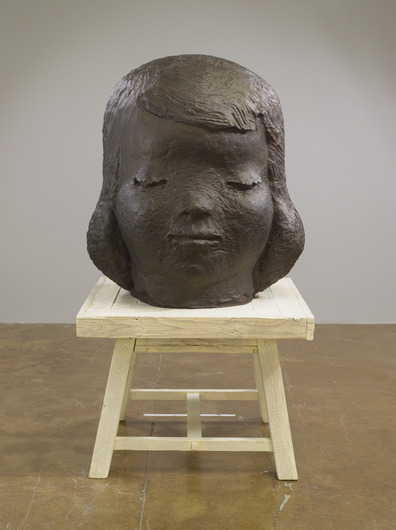 Yoshitomo Nara, When You Feel so Sad (2012), via PACE Gallery

In fact, many of the paintings are defined by an almost nauseous glow of light that gives them an unnatural, ominous character.  Nara’s sculptures occupy a similar mindset, with his subject’s eyes failing to possess much in the way of a lively spark, and the rapid, thickly daubed appearance of the materials robs the work of a sense of well-considered construction.  In a series of painted woodworks, Nara’s girl subjects are placed in lackadaisical poses, complemented by equally tepid, nihilistic phrases like “Words mean nothing at all.”  Possessing an innate “cuteness,” Nara’s girls are still defined by their alienating character, holding us back from immediately reaching a judgement. 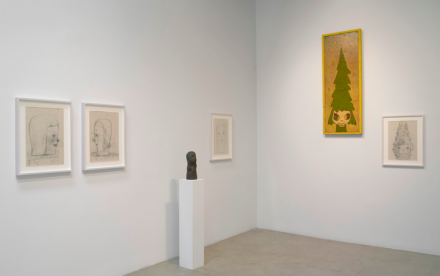 Blending a sharp edge with his cartoonish characters, Nara confuses the genres and forms he so frequently pulls from.  Instead of operating within the cartoonish lineages of Japanese art, or the melodrama of western cartoons and music, Nara blends the two to promote an easily detected sense of disease and displacement.  His subjects are vacant, absent of the life the viewer so often expects from the characters of an animated universe.  Instead, the child captured becomes a stage of its own, where the viewer’s own reference points and cultural constructs are brought to bear.  Rather than pushing through towards a definitive cultural examination, Nara seems content to stand back, letting us fill in the blank space. 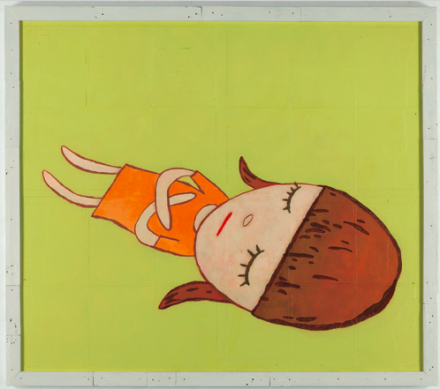 This is perhaps what makes Nara’s work so appealing and engaging, despite its subdued colors, mellow forms and unassuming subject matter.  With a seemingly tacit understanding of the international cultures and forces his work is bound up in, Nara works against a simple category or context, instead letting his characters float freely between traditions.  Instead, he seems to become entangled in the question of the child itself, not only in a Japanese or American tradition, but rather, what the child becomes in a culture where none of these previously rigid identities are sacrosanct.

Nara’s work is on view until June 29th. 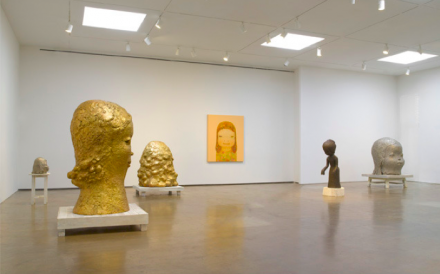 Yoshitomo Nara, …Words mean nothing at all (2012), via PACE Gallery

This entry was posted on Thursday, June 27th, 2013 at 7:22 pm and is filed under Art News. You can follow any responses to this entry through the RSS 2.0 feed. You can leave a response, or trackback from your own site.