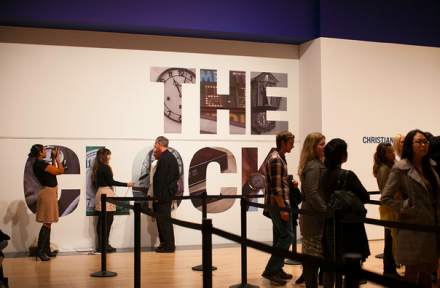 Outside “The Clock” at SFMoMA, via SFMoMA

The San Francisco Museum of Modern Art hosted its last weekend event series this weekend, featuring a free 24-hour screening of Christian Marclay’s The Clock.The event marked the last days of the museum’s current space, as it closed its doors yesterday for a planned 225,000-square-foot expansion, which will make it the largest new American art museum of the decade. 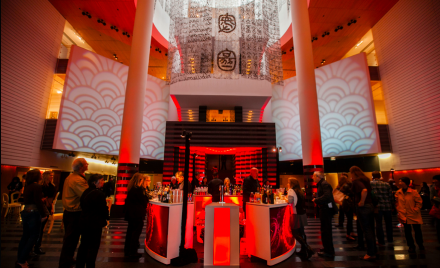 Community members at SFMOMA have reflected upon the institution’s new addition, using the SFMOMA Open Space blog, soliciting proposals from a variety of artists and activists to ‘imagine their own proposals for a museum in San Francisco’. Proposals have questioned the constraints of the museum as well as suggested alternatives which would look to undo the internal logics of privatization, expanding the museum’s scope beyond its available gallery space and into the public conscious.  Fittingly then, Christian Marclay’s film addresses the spectre of interlude in a period of large-scale epistemological transition, emphasizing the passage of time as the museum looks to readdress its responses to physical limitation in new ways 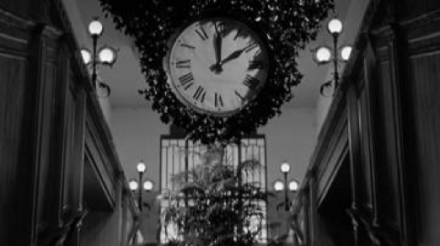 Marclay’s time-piece has become one of the art world’s most talked-about film projects since its debut in 2010 at the White Cube in London. The film has been hailed as a mesmerizing and hypnotic relic of time, drawing crowds and queues in upwards of nineteen locations across the globe, including New York (Paula Cooper, Lincoln Center, MoMA) England, Los Angeles, Sydney, Canada and Zurich, among others. Marclay received a Golden Lion Award for the work at the 2011 Venice Biennale, and copies of The Clock have since been acquired by a vast number of museums and private collections. 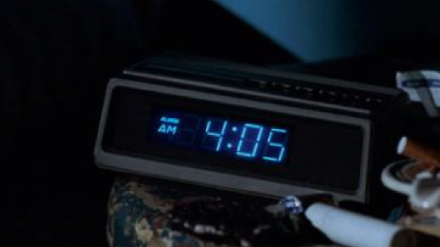 Marclay and a team of six assistants worked with a budget over 100,000 (backed by both White Cube and Paula Cooper) for three years, parsing, ripping and sorting digital videos to turn out this pastiche of masterfully edited, frenetically woven literal catalog of interval. The Clock exists in a world where each moment is more like a slice of deep-time, a nucleus rather than a framework. It reads like a behind-the-scenes view of a contemporary meta-modern landscape, accepting cultural appropriation as a fact of current creative trends, and transcending those trends through the nostalgia of film. Marclay employed assistants to collect more than ten-thousand clips for the chronology, but architected the editing process himself, gently yet diversely weaving together bits of well-known faces from popular films with rather unknown sequences.  The result is a dizzying collage of filmic segments, acting in equal parts as a time-keeping device, a studied history of film, and a reflection on the relativity of time and record in art. 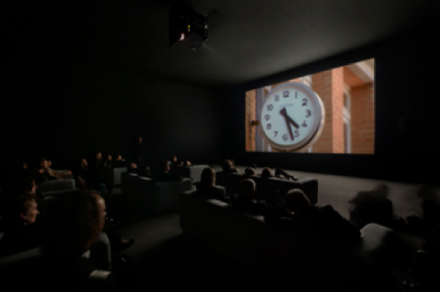 Throughout the work, Marclay is present, engendering a sentimentality for the noir made visible by a seamless meandering through language, genres, periods and color schemes in a few blinks of an eye.  The film reads as a continuous journey, nary a mention of a choppy fade or sound blip.  Mechanical, virtual and digital realms melt together or appear increasingly disparate in a display of intricate synapses between sound and image.  The unnerving pace of The Clock expertly mirrors a civilization beholden by Fordist ideologies, process endlessly churning out a mulched down series of cinematic figments serving the artist’s new ends. Viewers find themselves tied to the fixed compression of particulars which seems to call for an emancipation from the materiality of the commonplace. 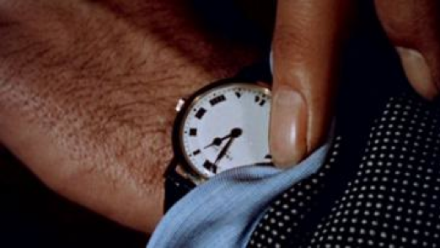 Ultimately, the reflexives of duration in an isolation-chamber-type experience reveals numerous perspectives, both on-screen and in the room itself.  The wait time to see the piece at SFMOMA ranged between one to three hours, and viewers could spend however long they like in the screening room. Those that nod off were woken by museum docents, and many viewers could, ironically, be seen checking their watches.  While existing wholly within time, The Clock itself is a self-aware, constantly projecting time-piece that binds the viewer up in their awareness of the passage of time, a hypnotic result that confounds the perspective of the viewer as they experience absolute time pass on-screen. 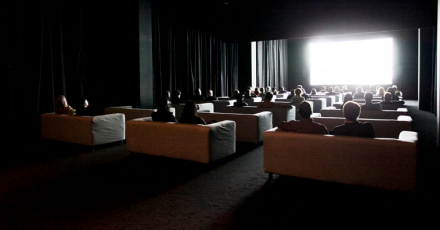 The Clock at SFMoMA, via SFMoMA

Marclay’s piece parallels the clock-watching perspective seemingly ubiquitous at SFMOMA currently. The institution is preparing to focus its resources into the larger Bay Area with a planned “extensive off-site programming” (including Mark di Suvero’s large-scale sculptures at historic Crissy Field near the Golden Gate Bridge) until 2016. The Clock has been on view at SFMOMA since April and screened for a final 24-hour viewing during the museum’s free Countdown Celebration on Saturday June 1st, commencing at 10 AM until June 2nd at 5:45 P.M., at which point the museum shut its doors to being the renovation, beginning the long reconstruction process that will surely have SFMoMA supporters watching the clock again in anticipation of its new space. 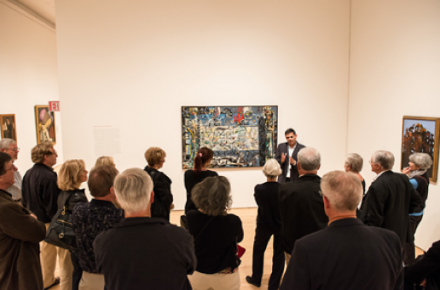 This entry was posted on Thursday, June 6th, 2013 at 2:02 pm and is filed under Art News. You can follow any responses to this entry through the RSS 2.0 feed. You can leave a response, or trackback from your own site.