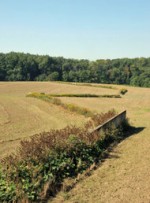 Richard Serra’s Shift, a series of zigzagging wall structures built along the changing elevations of the field it moves through, has been designated as a cultural heritage site in North Toronto.  Voted through by the township council of King City, Ontario, the work was the subject of fierce and ongoing debate, finally pushed through by a group of concerned citizens called “Friends of Shift.”  “It is especially gratifying that it was the result of the initiative of a group of private citizens who care about art.”  Mr. Serra commented.

This entry was posted on Monday, June 3rd, 2013 at 11:03 am and is filed under Art News. You can follow any responses to this entry through the RSS 2.0 feed. You can leave a response, or trackback from your own site.