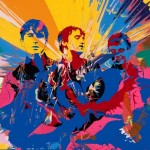 Babyshambles, a British band led by Pete Doherty, have revealed the artwork for their new album ‘Sequel To The Prequel’ designed by Damien Hirst. The image uses a photograph by the infamous rock photographer Pennie Smith, who shot iconic photographs of The Clash and The Slits, among others. The album, which is the Babyshambles’ third studio album, will be released on  September 2, 2013.

This entry was posted on Tuesday, July 23rd, 2013 at 2:22 pm and is filed under Art News. You can follow any responses to this entry through the RSS 2.0 feed. You can leave a response, or trackback from your own site.