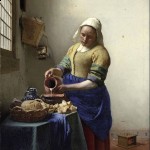 Announced this week, Sony Pictures Classics plans to release Tim’s Vermeer a documentary exploring the approach and technique of 17th century master Jan Vermeer.  Directed by longtime magician and entertainer Raymond Teller, the film will chronicle a Texas-based inventor named Tim  Jenison as he explores how Vermeer accomplished the impressive verisimilitude of the painter’s works.  “Tim is a genius, but I’m a skeptic. I wanted to see him do it. Teller has been the Penn & Teller de facto director since our beginnings, so we made a movie of Tim’s whole monomaniacal trip.”  Says longtime collaborator Penn Jillette.Read More at New York Times

This entry was posted on Tuesday, July 30th, 2013 at 4:53 pm and is filed under Art News. You can follow any responses to this entry through the RSS 2.0 feed. You can leave a response, or trackback from your own site.