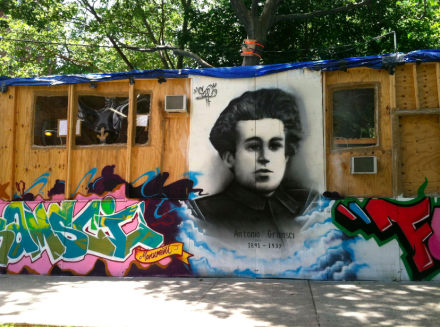 “Everyone is an intellectual.”  These words by Italian anarchist/Marxist Antonio Gramsci adorn the walls of Gramsci Monument, the fourth and final entry into Swiss artist Thomas Hirschhorn’s monumental installation series to his favorite thinkers and writers, currently open in the Forest Houses housing project in the South Bronx.  Opening the platform to cultural dialogues, political research and community art efforts, Gramsci Monument continues Hirschhorn’s efforts at destabilizing the spatial encounters of a work of art, broadening its scope to a space where all participants are welcome to create their own meaning. 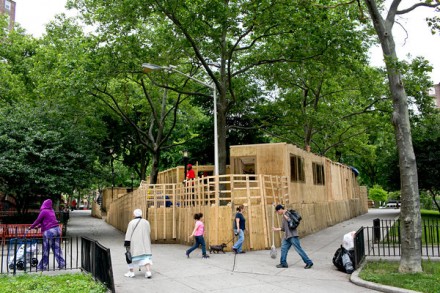 A vocal opponent of the Italian fascists in the early 20th century, Gramsci was eventually imprisoned by the state, where he died after years of poor health and neglect.  What remains are the writer’s dense, brilliantly written notebooks, challenging notions of state-held power, and creating a new analytical approaches to power, control and oppression within a Marxist framework, which has since become a fundamental touchstone of post-war political and philosophical thought. 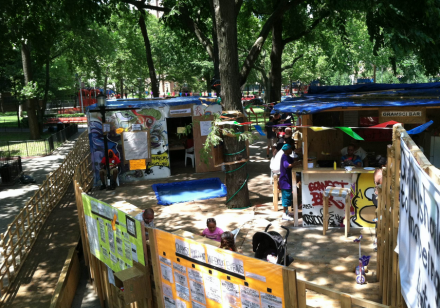 It is this tradition that Hirschhorn works to revive, and his monument takes on certain aspects of Gramsci’s oppositional thought.  Built from plywood, tape and nails, the appearance of the work is rudimentary to say the least, serving its temporary needs as efficiently and unceremoniously as possible.  The monument almost bears resemblance to a child’s fort, made all the more appropriate by the endless presence of children running from room to room for art classes, lessons and other events.  The monument also includes a restaurant/cafe, radio station, library, museum (including a pair of Gramsci’s slippers and some of his original prison notebooks), and a common area, where the artist presents teaching programs, workshops and classes. 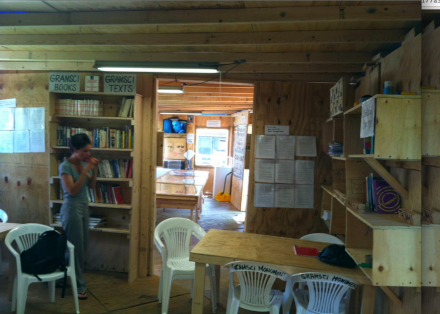 Refusing to confine itself as a wholly “community” driven initiative or art world conceptual exercise, the Gramsci Monument works on the level of open space.  Visitors are welcome to roam freely, pausing to read, talk, chat or take part in various panel discussions or lectures.  While the exhibition does not force any critical reception of Gramsci, his work or his historical place, there is something to be said for a space where any visitor can walk in on the community radio station, and one can hear 10 year old children discussing what they think art over the airwaves.  Complementing the information available at the monument, Hirschhorn has welcomed a number of highly recognized philosophers, writers, artists and political theorists to join him for a series of panel discussions and lectures, discussing Gramsci’s life and work. 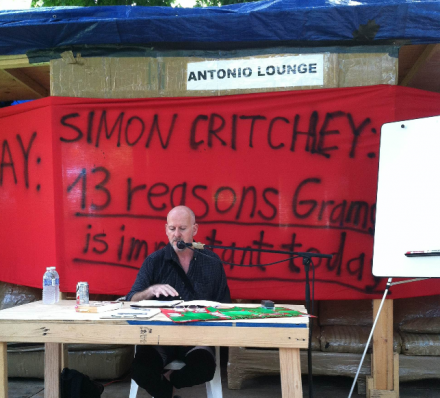 Perhaps the most interesting aspects of the monument is its awareness of its own roles and origins.  Commissioned by the Dia Art Foundation, the backing for the project is distinctly established by the elite power structures of the mainstream art world.  With his last piece, Hirschhorn turns his eyes directly towards the cultural hegemony of this system.  The monument does not become a radical departure from the “status quo,” so much as it marks a moment of tacit acknowledgement of its place, and uses that platform to launch a broader discussion of the systemic forces that have established it.  The Gramsci Monument does not seek to enact swift and rapid change, but instead provides the tools for analysis, however initially idiomatic they may seem. 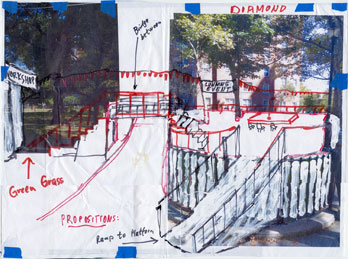 Taken as a whole, the Gramsci Monument is something of a blank space, open to the efforts and interpretations of its visitors, workers and the artist himself.  While participation is a fundamental aspect of the work, Hirschhorn does not impose his will for action on the visitor, instead allowing them to experience the work on their own terms.  While the writings and life of Antonio Gramsci offer a compelling reappraisal of art, culture and politics, it is up to the viewer to embrace it.

The Gramsci Monument is open until September 15th.  A full list of events, workshops and discussions can be viewed at the project’s website. 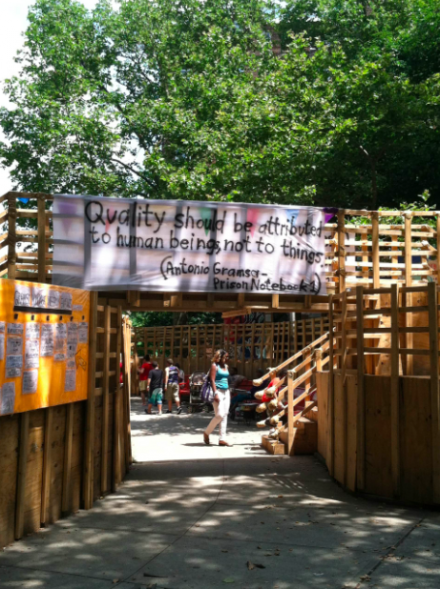 This entry was posted on Sunday, July 21st, 2013 at 11:15 am and is filed under Art News. You can follow any responses to this entry through the RSS 2.0 feed. You can leave a response, or trackback from your own site.