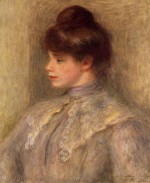 A 1903 portrait painted by Pierre-Auguste Renoir, stolen from a Tokyo home last decade, was reportedly sold at Sotheby’s this past February, Japan Times reports.  The portrait, titled Madame Valtat, had disappeared from its original owner’s home along with works by Marc Chagall and Ikuo Hirayama in 2000.  Sotheby’s has stated that the work had been legally acquired by the seller, and that it will continue to investigate the sale, but the case may prove difficult to fully resolve, as the auction house keeps the names of its sellers confidential.Read more at Japan Times

This entry was posted on Wednesday, August 7th, 2013 at 11:09 am and is filed under Art News. You can follow any responses to this entry through the RSS 2.0 feed. You can leave a response, or trackback from your own site.