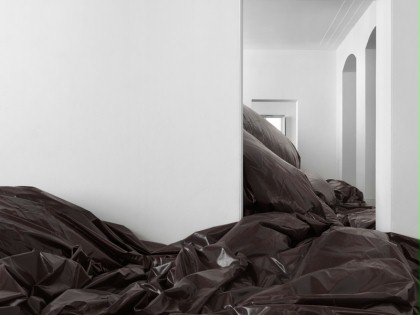 Covering more than 3,000 square feet in the Martin-Gropius Bau, Kapoor in Berlin is one of the Berliner Festspiele’s tentpole events this summer, examining the pioneering work of Anish Kapoor’s sculptural practice against the backdrop of his German contemporaries and influences.  Composed of almost 70 works, the exhibition serves as an examination of the Turner Prize winner’s work of the past 30 years. 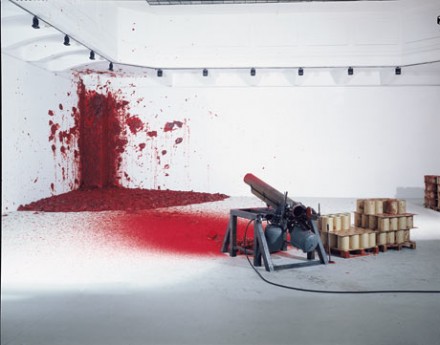 Originally born in Mumbai, Kapoor arrived in London in 1973 to study at the Hornsey College of Art, and has since made the British Capital his home.  It is this confluence of artistic traditions that Kapoor brings to bear on much of his art, pioneering a sculptural practice that explores dichotomies of presence and absence, object and subject as expressed through eastern concepts of “the void,” the chaotic state from which all conceptions of being emerge.  The works on view continually revisit these ideas, examining the artist’s own sculptural practice as a way to negotiate these dichotomies.  Complex, viscerally layered heaps of material stand adjacent to highly reflective, minimalist exercises, challenging the viewer to understand their relation to the work itself, as well as the works’ movement between the extreme ends of Kapoor’s career. 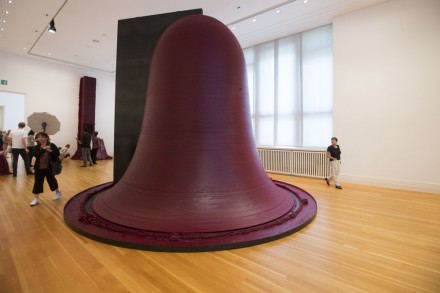 Also present in the sculptural works of Kapoor, moving across his diversified practice of unique and idiomatic elements, is the question of space, and the real, tangible occupation or negation of it through the sculptural process.  Kapoor’s pieces, time and again, inquire into the sculptural ability to negotiate space, and its effects on its own surrounding environment.  His reflective, mirrored works take this exploration to one extreme, seeking to abolish the perception of the work in a singular, easily categorized spatial relation, the best glass or steel of the work constantly confounding the viewer’s eye, and forcing it to consider the sculpture perhaps as only the perspective of itself from another angle.  In other works, Kapoor works this approach in full reverse, using motors, mechanics and other processes to gradually fill an exhibition space. 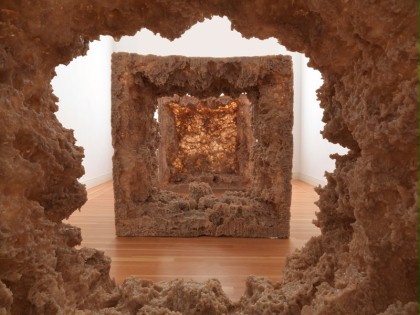 One such piece, already commanding considerable excitement and praise at the exhibition, titled Shooting Into the Corner, explores this ability of the sculpture to gradually alter its space.  An enormous, hydraulic cannon sits in the middle of a room, continually reloaded and fired into a corner, plastering the space with ever-increasing layers of Kapoor’s signature red wax.  Violent and evocative, the piece follows many of the artist’s other wax works, examining the slurry of fluid material spread through the violent intrusion of the human hand into the work. The work is also reminiscent of one of Kapoor’s heroes, German Joseph Beuys, utilizing simple materials combined with a personal significance and grand scale to work powerful effects on the viewer. 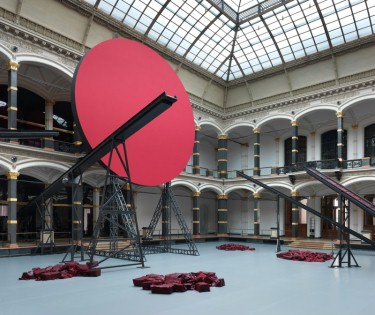 Other works on view exhibit Kapoor’s interest in environmental transformation.  A new work, Death of a Leviathan, fills one full room with billowing, black sheets of PVC material, coating the space with an ominously delicate atmosphere, calling on the viewer to consider their shared ecological responsibilities while pulling them ever deeper into Kapoor’s elusive installation. 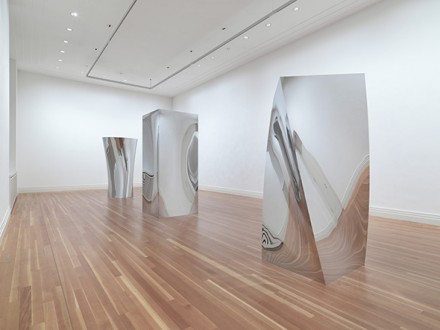 The sculptural project of Anish Kapoor has time and again been praised for its reinvention of the artistic language, and the ability to imbue simplistic materials with a new artistic, social weight.  But even more significant is the artist’s interest in the human experience of his work.  Continually subverting the perceptions of the human viewer, Kapoor challenges the visitor to move beyond their own assumptions, taking part in an experience that ultimately becomes greater than their singular encounter.

This entry was posted on Wednesday, August 14th, 2013 at 12:00 am and is filed under Art News. You can follow any responses to this entry through the RSS 2.0 feed. You can leave a response, or trackback from your own site.