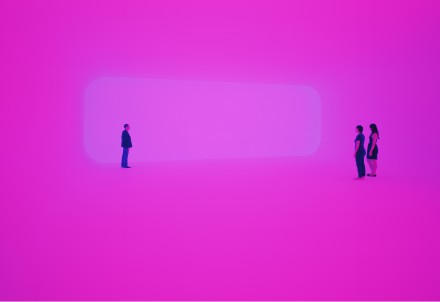 Part of his three-museum, nationwide retrospective, James Turell lights up LACMA with a retrospective that exhibits works from the artist’s nearly fifty-year career.  Extending across an entire wing of the Resnick Pavilion, and an entire floor in the Broad building, the exhibition is easily the heaviest concentration of works by Turrell in one place that one could hope to see in a lifetime.  Loosely chronological, the show begins with a projection work from the first years of Turrell’s light experiments, and ends with an immersive environment created this year.  These works, Afrum (White) (1966) and Breathing Light (2013), provoke pure wonderment, emphasizing the device central to Turrell’s artistic investigations: that the work itself doesn’t necessarily exist in the space, but within the viewer’s experience, moving through the work. 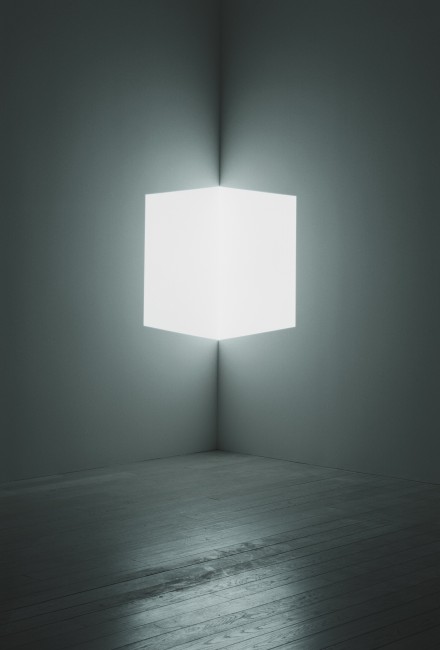 Afrum (White) is a projection of white light that creates an elusive geometric form, hovering in the corner of a dim gallery. The image dances in the spectator’s eye between a three-dimensional cube and a flattened hexagon against the wall; one nearly grasps control of the image until it slips away to reveal a different form. Turrell’s projection pieces were among of the first artworks that Turrell created in college, inspired by the slide projectors used in his art history courses. 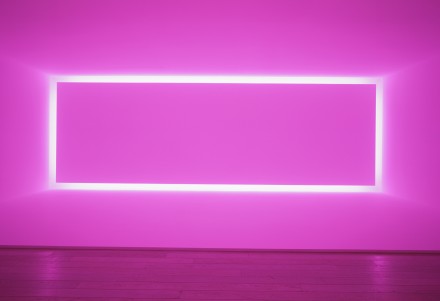 From the colorless Afrum cube to a second, flatter corner projection, Raemar Pink White (1969) stands as Turrell’s first use of color in his works.  At first bearing an intense, fluorescent glow, the color gradually fades to a pale pink as a result of optical fatigue. Exiting the chamber, the viewer may discover the walls that once appeared grey have turned green,the eye having burnt out some of its color receptors.  One only rediscovers the pink hues of the outside world after minutes outside the space, emphasizing the pure optical potency of Turrell’s works. 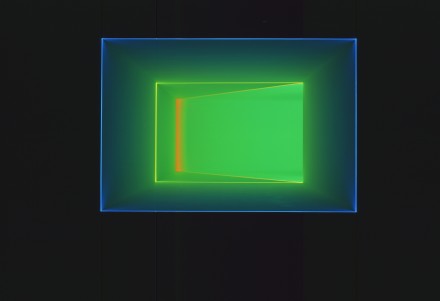 In later works, Turrell addresses architectural structure and composition, particularly with his 1994 wedgework, Key Lime. Navigating through a dark hallway by touch, the senses of space and depth becomes unbound, finally entering a dark and hazy room, lit with glowing prime colored strips of light. The abstract geometric forms appear flat, like painting created with beams of light.  With time, however, the viewer’s eyes adjust, and the space reveals itself to be a deep chamber, trisected with lit peripheries and a glowing anterior hallway. The composition, taken as a whole, is both a mystifying optical illusion and a device to understand space. 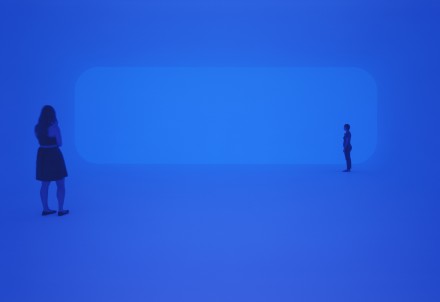 Breathing Light (2013) is the most recent work of the Ganzfield series, using space and perception to create mystifying environments. The term Ganzfield describes the snow blindness experienced by Arctic pilots, whose visual system shuts down and disables them from distinguishing between snow and sky.  After removing one’s shoes and climbing up a set of stairs into the piece the viewer is immersed in a misty room where there seem to be no boundaries between wall floor and ceiling. A program of slowly pulsing lights plays and it quickly becomes unclear whether the visions are occurring within the eye or physically in the space. Like Afrum, it is a direct experience with light, in which the artwork is unfolding within the eye and around it, orchestrated and engineered by Turrell.

The most extreme work of immersive perception-bending is the Perceptual Cell, which holds one person inside a 10 foot sphere, seated on a gurney. The work brings the viewer into a state of hallucination for ten minutes, by way of a light program revealing the biological structure of their own eyes.  Reservations for a ride in the visual rollercoaster must be purchased in advance and were sold out through the run of the exhibition shortly after its opening. 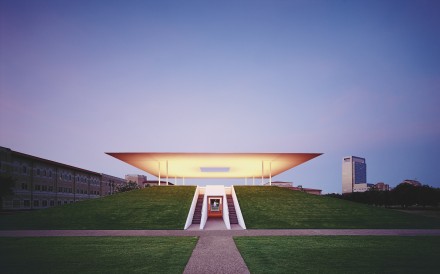 The majority of the exhibition is focused on light as it interacts with architectural space within the bounds of a gallery. A room is dedicated to the sight specific works that he has put up across the globe. The most popular series are Skyspaces, in which ceilings are opened up and lighting is programmed around the gaping hole, in order to create a dazzling interplay of colors during the shifts in light throughout the day. 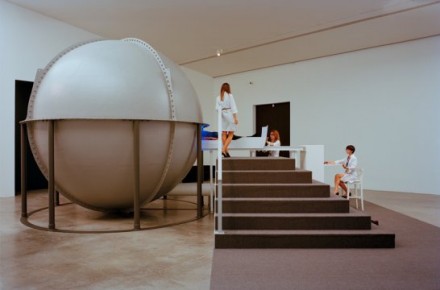 A wing is also dedicated to diagrams, video, photographs and models of the unfinished Roden Crater project, Turrell’s masterwork, which has been in progress since 1974.  Transforming the landmass situated in Arizona into a naked eye observatory which holds tunnels and chambers designed to view celestial events, the completed Roden Crater project will turn a vast expanse of the Arizona desert into a massive work of art.

While a visit to the exhibition means battling long lines for experiential modules that only allow a limited number of viewers at one time, the show delivers ethereal visions and immersive experiences that are worth the occasional frustration of navigating through a blockbuster exhibition. 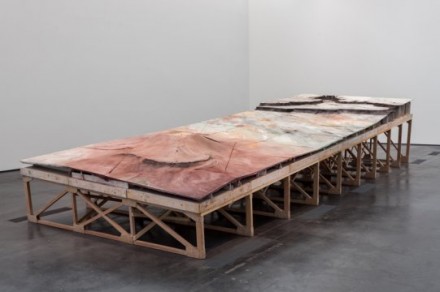 This entry was posted on Sunday, August 11th, 2013 at 12:00 am and is filed under Art News. You can follow any responses to this entry through the RSS 2.0 feed. You can leave a response, or trackback from your own site.