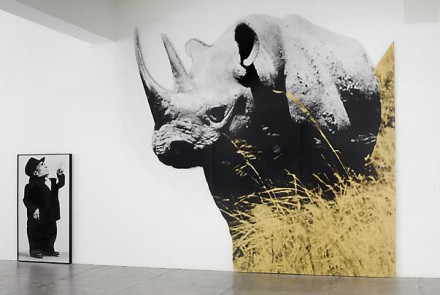 California-based artist John Baldessari is showing at the Marian Goodman gallery in New York through August 23. Installation Works: 1987-1989 is a retrospective of a key moment in Baldessari’s career. The work presented in this exhibition speaks to a new architectural sensibility that intervenes in the play of chance encounter and appropriation of circumstance that characterizes Baldessari’s work. The influence of frame and angle over the visual subject appears as a significant theme in this collection. Installation Works is a resistance to frame and demarcated space. The selected work on view at the Marian Goodman gallery offers the opportunity to engage in questions of form, shape, and “the hierarchy of vision” that Baldessari’s work references (Press Release, Marian Goodman Gallery). 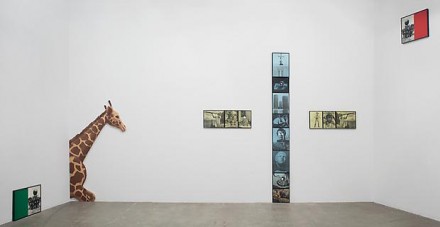 Dwarf and Rhinoceros (With Large Black Shape) has circulated widely in the United States and Europe since it’s installation in 1989 in Madrid. The piece can be found in the North Gallery, and exemplifies the dynamism and humor of Baldessari’s early composite photo installations. The Difference Between Fête and Fate, 1987 is an unwieldy compilation of reframed film stills and found images. The treatment of shape and frame in this piece reveals the attention to structure and frame that characterizes this moment in Baldessari’s career.

John Baldessari, The Difference Between Fête and Fate. 1987.

Baldessari is perhaps now best known for his work featuring appropriated images and photo collages.  His work illustrates an imagery of narrative and references the relationship between text and image, as well as removing film and television stills from their moving context. The effect is a body of work that proves both subtly comical and critical. The culture of the image is called into question, as well as politics of consumption and coherence. The work suggests significant metaphysical concerns of reproduction, authorship and meaning while embracing the whimsy of the repurposed image.

This entry was posted on Tuesday, August 20th, 2013 at 9:38 am and is filed under Art News. You can follow any responses to this entry through the RSS 2.0 feed. You can leave a response, or trackback from your own site.