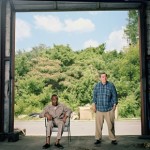 The New Yorker has published a story on the relationship between Bill Arnett, a white art dealer and archivist of black vernacular art, and Thornton Dial, an 84-year old, self-trained black artist who has had  his highly praised work included in major exhibitions and events, including the 2000 Whitney Biennial.  Facing Dial’s facile categorization as an “outsider artist,” Arnett is currently pushing for mainstream acceptance, not only of his work, but of 20th century African-American Art in general.  “I’m trying to create some documents to leave behind, so that when the system changes, just a little bit, somebody would say, ‘Wow, you mean we had this going on in America in the twentieth century?’  That’s all.”

Read more at The New Yorker

This entry was posted on Tuesday, August 6th, 2013 at 2:09 pm and is filed under Art News. You can follow any responses to this entry through the RSS 2.0 feed. You can leave a response, or trackback from your own site.