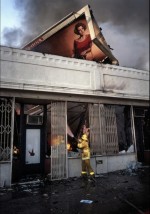 Allan Sekula, the multimedia artist and former recipient of the Guggenheim Fellowship, has passed away at the age of 62.  Working across disciplines, Sekula produced a diverse and challenging body of work that included film, installation and photography (his most recognized work), often generating texts alongside the work that helped to further investigations into the media he utilized.  His work has shown at the Tate Modern, Moderna Museet in Stockholm, and MoMA, among others.  His death comes just days after MoMA announced the acquisition of his seminal Fish Story series.

This entry was posted on Tuesday, August 13th, 2013 at 4:44 pm and is filed under Art News. You can follow any responses to this entry through the RSS 2.0 feed. You can leave a response, or trackback from your own site.