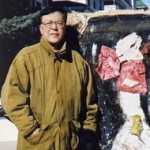 The accusations and investigations surrounding the Knoedler Gallery, and the arrest of dealer Glafira Rosales have taken a new turn, with the identification of the forger of at least 63 works attributed to Modernist masters like Jackson Pollock and Mark Rothko.  Artist Pei-Shen Qian, is a Chinese painter living in Queens, who fled his country in the wake of the cultural revolution, and who has eked out a living selling forged works to Rosales for over 15 years.  His payment for these works rarely exceeded several thousand dollars, even though some of the works sold for millions.  “I didn’t know he had this kind of a good technique,” said Qian’s friend and fellow artist Zhang Hongtu. “He had some talent, but I don’t believe he can paint in the same style as a Jackson Pollock; it’s not easy to copy this kind of style.”Read more at NY Times

This entry was posted on Saturday, August 17th, 2013 at 3:08 pm and is filed under Art News. You can follow any responses to this entry through the RSS 2.0 feed. You can leave a response, or trackback from your own site.