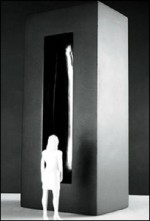 Sculptor Anish Kapoor has unveiled Unity, a memorial to those killed in the 2001 attacks on the World Trade Center in New York City.  The 19.5 foot tower will be installed at Hanover Square, near the site of the original towers, and will contain a mirrored interior.  “The chamber reflects light so as to form a column, which hovers, ghost-like, in the void of the stone.”  Says Kapoor.  “This very physically monolithic object then appears to create within itself an ephemeral reflection akin to an eternal flame.”

This entry was posted on Wednesday, September 11th, 2013 at 7:33 pm and is filed under Art News. You can follow any responses to this entry through the RSS 2.0 feed. You can leave a response, or trackback from your own site.