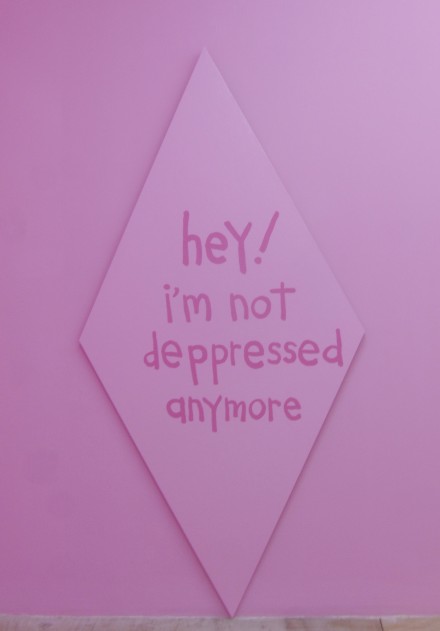 “Hey! I’m not depressed anymore.” So reads one of the simplistic, shaped canvases currently on view at Cary Leibowitz’s new show at Invisible-Exports.  It’s familiar territory for the artist, whose signature conflations of text and paint frequently dwell on the comical neuroses inherent in modern living, scaled appropriately for the New York art world.  It was Leibowitz, of course, whose enormous wooden sign sat outside the Armory Show earlier this year, reading “I Need to Start Seeing a Therapist,” blowing his work up to monumental scale for the equally daunting size of the exhibition contained within Piers 92 and 94. 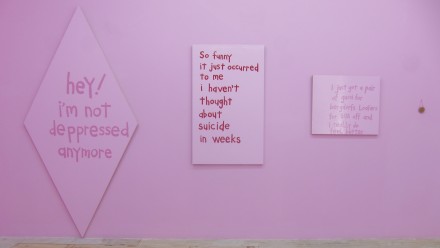 Here, Leibowitz is presented in a considerably more manageable scale, with a handful of works on view within the gallery’s new space on 89 Orchard Street.  Painting the full space in a subdued pink, and leaving the floors unfinished, the visual presentation of the gallery is occasionally disorienting, experimenting with considerations of space and form that welcome a new facet to Leibowitz’s sardonic, yet somewhat winking sense of self-loathing.  While the text on each piece carries a heavy-handed depression, one cannot help but chuckle, bemused by the jagged, handwritten font and soft hues of the pieces. 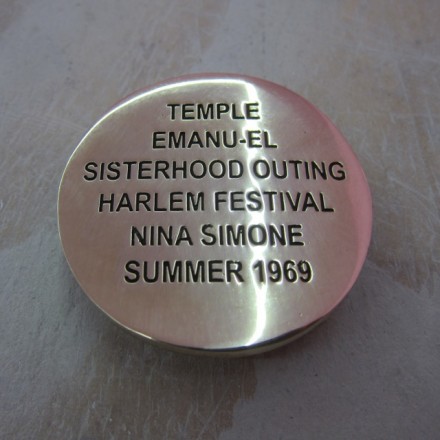 Familiarity with Leibowitz’s career seems to add to the comic dissonance of his work, as if the viewer finds themselves in disbelief that the artist could continue his shtick of confusion, depression and alienation as long as he already has.  What’s more, with these themes standing as familiar, even expected tropes in Leibowitz’s work, he becomes liberated to experiment with his signature language.  Words and phrases are spread across the canvases, and the varying shapes of the works are invited to enter into new dialogues with their content (one such work praises the emotional benefits of pizza, cut into the evocative shape of a large slice of the pie).  Playing with the semantic capabilities of his form, Leibowitz delves deeper into act of messaging itself, highlighting the frequent absurdism that results from dissonance between object and meaning. 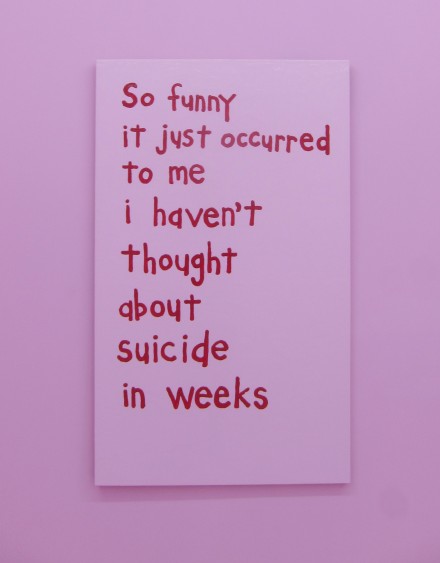 Alongside these works, Leibowitz also presents a set of playful belt buckles, featuring the names of various prizes, events and memories that they are clearly intended to commemorate.  Often remarkable in their wit and awareness (one piece recalls the “Alice B. Toklas Clam Bake Bake Sale Bake Sale Clam Bake,” in a nod to poet Gertrude Stein), the often jovial, childish glee of these pieces work initially clash with Leibowitz’s half-hearted complaining, drawing ever closer as the lighthearted undertones of his paintings begin to emerge. 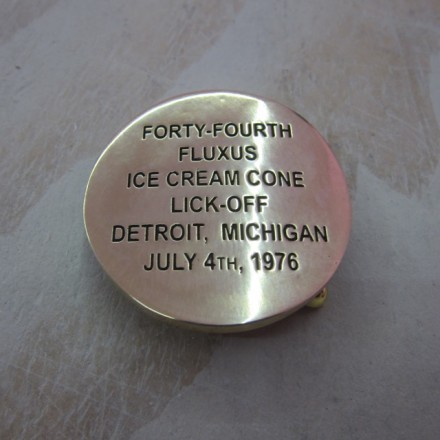 Preferring a skim off the surface of the human psyche rather than a deep plunge, Leibowitz’s work provides just enough self-awareness to give the viewer a good laugh.  Leibowitz’s show is on view until October 13th. 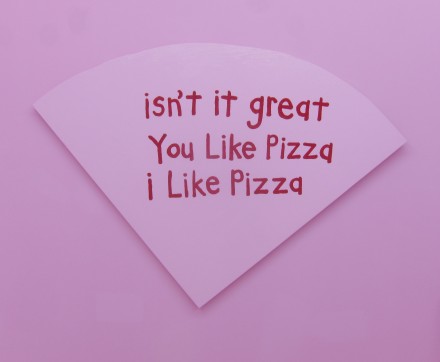 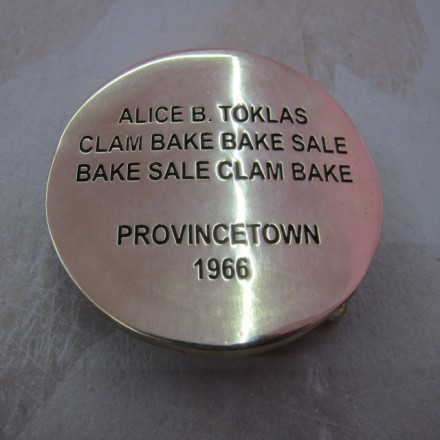 This entry was posted on Wednesday, September 18th, 2013 at 12:00 am and is filed under Art News. You can follow any responses to this entry through the RSS 2.0 feed. You can leave a response, or trackback from your own site.