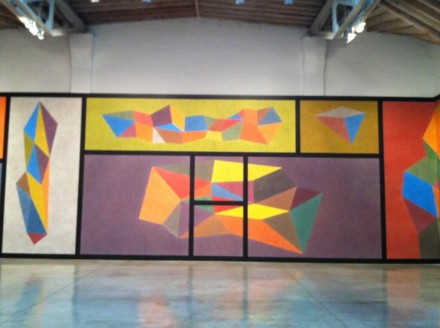 As an aspiring painter in New York City during the late 1950s, American artist Sol LeWitt struggled to find his “touch,” in the midst of the waning days of Abstract Expressionism- a movement which focuses on the importance of individual creation.  After taking a job at the book counter of the Museum of Modern Art in 1960, LeWitt became familiar with the engineering aesthetic of Russian Constructivism and Eadweard Muybridge’s sequential photographs, developing an interest in reducing art to its bare essentials. Literally recreating art from square one though his explorations of geometric forms, LeWitt is now considered to be one of the essential founders of both Conceptual and Minimal art. Differing from strict Minimalists by his focus on systems and concepts over materials, LeWitt’s art is one in which ideas and collaboration are paramount. 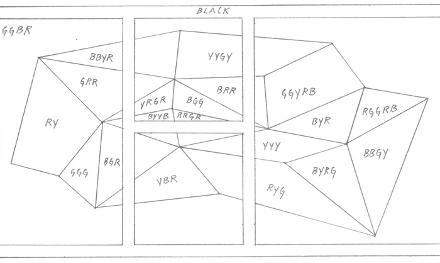 Though LeWitt was prolific in a wide range of media, he is perhaps best known for his sculptures, or “structures,” and his wall drawings, of which he produced over 1270 in his lifetime. Coming to public attention in the late 1960s, LeWitt’s work contemplates the nature of structure and varying visual complexity.

In order to create his drawings, LeWitt conceived guidelines or simple diagrams for two-dimensional works to be drawn directly on the wall, often dictated by structured and rigorous systems based on language, mathematics or logic. Wall Drawing #122, for example, called for “all combinations of two lines crossing, placed at random, using arcs from corners and sides, straight, not straight and broken lines” – and resulted in 150 unique pairings installed on the gallery walls of the Massachusetts Institute of Technology in 1972.  His instructions are also sometimes left intentionally vague, reading more like a game, and prompting unforeseen results. The final product of all of nearly all of LeWitt’s designs are therefore often playful and lively in appearance, maintaining an air of seeming spontaneity in the midst of structure, and a sense of variation that makes each rendition completely unique. 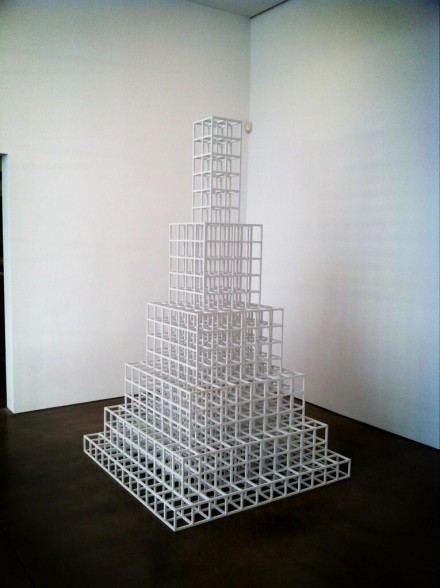 Wall Drawing #564, currently on display at the Paula Cooper Gallery, was originally conceived for the Venice Biennale of 1988.  Following LeWitt’s move to Italy in the late 1970s and deriving inspiration from Italian frescoes and early Florentine painters, Wall Drawing #564 relies upon a system of superimposing pigments with ink-soaked rags.  Layering each piece through a meticulous series of frames, overlapping segments and time-consuming bleedings of color and stroke, the piece has a remarkable textuality that LeWitt’s earlier pencil-based drawings seem to lack.  The rough surfaces of Paula Cooper’s walls give themselves over to the work, letting the delicate ink washes glow from the minute bumps of the wall and paint dabs.  The overall result gives off a subdued glow, gradually becoming more pronounced as the visitor walks through the space.

Similar in intent to that of a composer or architect who designs their work for others to carry out and perform, LeWitt’s drawings are executed on-site by draftsmen and other assistants, according to indications on his diagrams. The final products are painted straight on the walls and are often destroyed after an exhibition, giving the work an added layer of physicality and temporality each time LeWitt’s vision is realized anew. 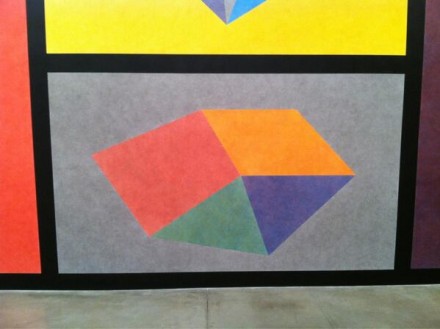 LeWitt’s work has been displayed internationally, and is included in the collections of a number of preeminent museums, including the Tate Modern, London, the Van Abbemuseum, Eindhoven, Centre Georges Pompidou, Paris, Hallen für Neue Kunst Schaffhausen, Switzerland, the Guggenheim Museum, the Museum of Modern Art, New York, Dia:Beacon, and the Hirshhorn Museum and Sculpture Garden, among many others.

This entry was posted on Thursday, September 12th, 2013 at 12:00 am and is filed under Art News. You can follow any responses to this entry through the RSS 2.0 feed. You can leave a response, or trackback from your own site.