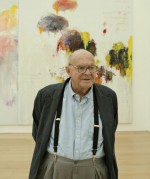 Ralph E. Lerner, New York lawyer and co-author of the multivolume “Art Law,” was accused on Wednesday for charging over $750,000 in unauthorized legal fees from the Cy Twombly Foundation, where he served as board secretary and director, The New York Times reports. The papers served yesterday describe that Mr. Lerner, “even charged legal fees for merely attending board meetings as a director,” and that, “no other board member received (or was entitled to receive) compensation (much less at the significant rate of $950 an hour) for attending the meetings or reviewing and editing the board meeting minutes.” Mr. Lerner’s contends, as released in a statement from his law office, that all his legal service fees “were made in accordance with the practices and procedures established by Mr. Twombly when he was alive.Read more at The New York Times

This entry was posted on Thursday, September 12th, 2013 at 4:34 pm and is filed under Art News. You can follow any responses to this entry through the RSS 2.0 feed. You can leave a response, or trackback from your own site.