May 17th, 2022
REFERENCE LIBRARY
Home » Smithsonian Director to Step Down Next Year

Smithsonian Director to Step Down Next Year 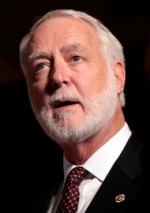 Smithsonian Institution director G. Wayne Clough has announced his intentions to step down as the head of the national museum and research network next year, providing the institution with time to find his successor.  “When I became secretary in 2008, I believed strongly that the Smithsonian had enormous untapped potential, especially in digital technology, to reach millions of people and serve as a resource for those who cannot visit Washington,” He said. “I am confident that with our initiatives under way in bioconservation, education, digitization and fund-raising, this is the right time to announce my plans for next fall so that an orderly transition can begin.”

This entry was posted on Saturday, September 21st, 2013 at 10:54 am and is filed under Art News. You can follow any responses to this entry through the RSS 2.0 feed. You can leave a response, or trackback from your own site.