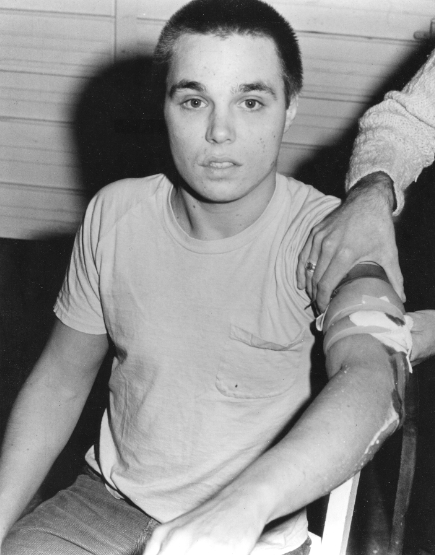 The New Museum’s Extreme Measures, a career retrospective of the work of Chris Burden, begins modestly: an orange flatbed truck sits in the museum’s ground floor exhibition space, holding a 1 ton block of steel on its mounted crane.  Silent and imposing , the work hints at Burden’s preoccupation with scale and weight, his focus on material scale and industrial affect. 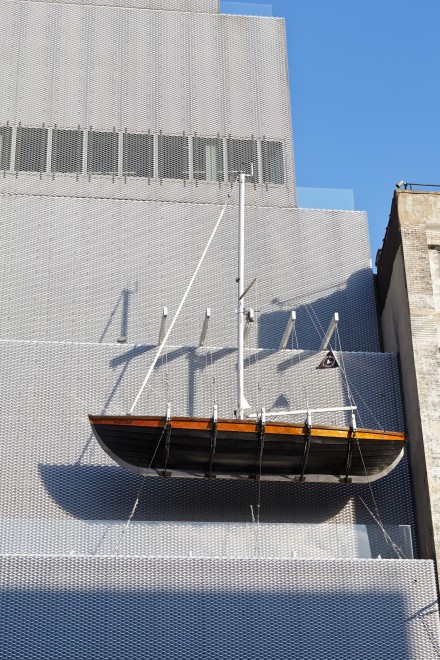 Over the past 40 years, Burden has wound a challenging, and often visceral path through the world of contemporary conceptual art, with works that consistently challenge humanity’s capabilities for violent force and creative engineering, conflations of industrial production and the human body, and hybrid forms of artistic production that combine sculpture, performance and film to create multi-layered works reaching into the darker recesses of American identity.  His show here is his first survey in New York, and his first major US exhibition in twenty years, welcoming a tightly curated, but rigorous view into Burden’s expansive creative practice. 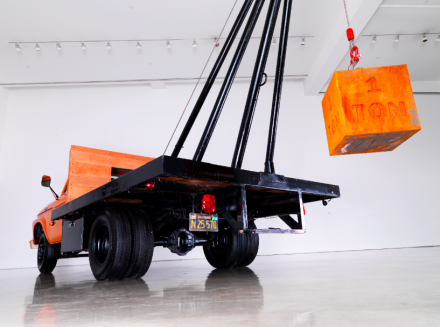 Beginning at the top floor of the museum, visitors are presented with a historical perspective of the artist’s early performance pieces, including Trans-fixed (in which he is crucified on a Volkswagen), and Shoot (in which Burden is shot through the arm on camera).  Showcasing Burden’s emergence from a series of highly potent, viciously charged pieces encountering the American experience in the utmost extremes, the stage is set for what reads as a series of variations, Burden continually revisiting consumer culture, large-scale production, and leisure as foils for his inquiries into American power, and its effects on the human body. 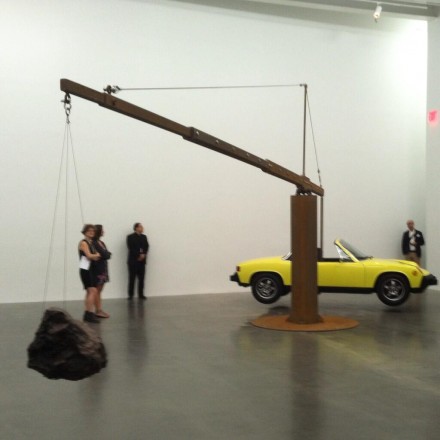 One floor below, the museum presents a trio of works, all encountering the ideas of danger and violence through mechanical force.  Particularly jarring is Burden’s film Beam Drop, where the artist continually penetrates a cement pool with enormous steel I-beams, dropped from a crane.  Tearing the surface of the cement before coming to rest, the work induces a sickening reaction, construction materials becoming metaphors for the sheer violence of industry.  Nearby, The Big Wheel evokes a similarly strong reaction, as a running motorcycle turns an enormous iron fly-wheel close behind it.  Watching the enormous machine spin so close to the user, one cannot avoid the impulse to cringe, the humming motor and scale of movement impressing the magnitude of danger at hand. Perhaps the most poetic note of the work is the need for external ventilation, else the carbon monoxide from the engine would create a deadly environment within the space. 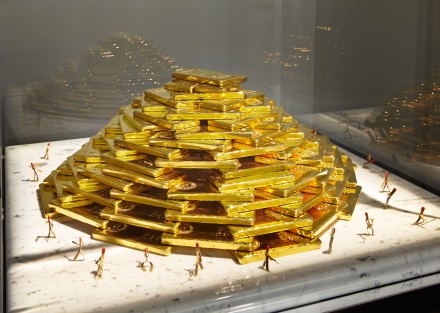 The show continues onwards through Burden’s later works, including Tower of Power, a geometrically arranged temple of gold bars (valued at over $4 million), surrounded by matchstick figures.  The fetishized image of wealth is arresting, particularly considering the wait in line to see the object.  Turning a vulgar display of wealth into a ceremonious moment of reflection (the work’s exhibition alcove brings to mind a temple sacristy), Burden brings the viewer into direct contact with the image of wealth as power. 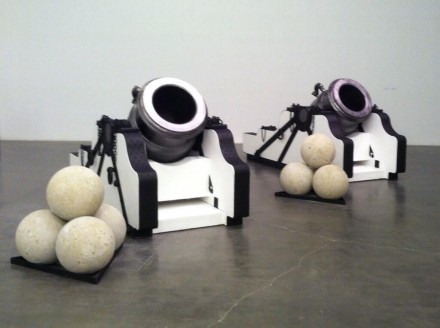 Throughout, Burden’s fascination with scale and size is notable, but never in an easily reducible form.  The works rarely embrace “bigness” for the sake of itself, but rather, examine scale itself as a default expression of humanity.  The size and form of Burden’s replica bridges and mortar works become investigations into the fascination man has with his own accomplishments, endlessly recreating and reproducing forms of industrial brawn and military power as iconic images, to the point that they become children’s play-things (perhaps best evinced in his Tyne Bridge erector set). 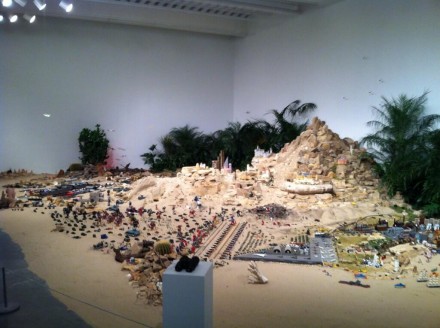 Chris Burden, A Tale of Two Cities (1981), via Daniel Creahan for Art Observed

With this in mind, one is nearly prepared for the last room of the exhibition, where Burden’s immense installation, A Tale of Two Cities creates a vicious scene of warfare between rival towns.  Constructed entirely from toys and puzzle sets, sand and plants, Burden’s sprawling environment pushes the viewer deep into its own space, including binoculars on the edge of the installation for viewers to examine the piece in close perspective. 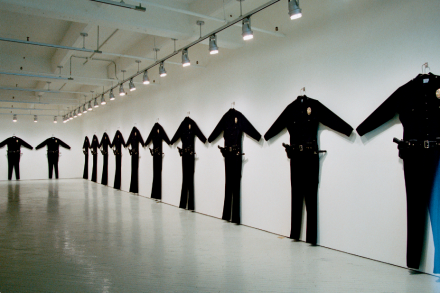 Throughout the museum, one is constantly made aware of the magnificent forces imposed, whether through images of discipline or mechanization, war or consumption.  Even so, one has difficulty losing sight of the body itself, torn and altered by the forces at play in contemporary society.  In an era of tech-centered accelerationism and ever-present images of war, Burden’s work is a moment of pause. 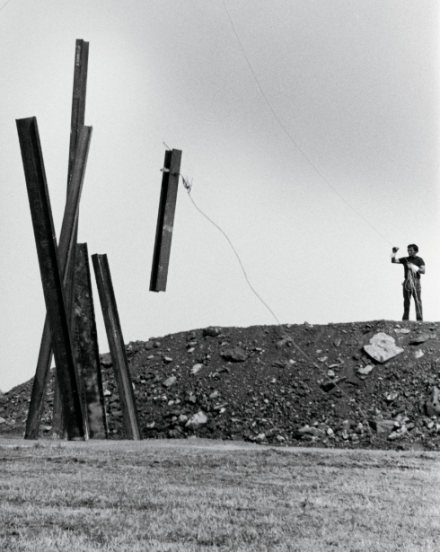 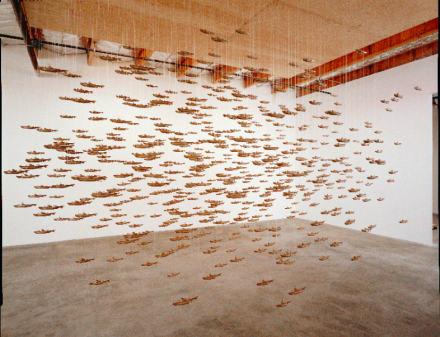 Chris Burden, All the Submarines of the United States of America (1987), Courtesy the Artist and Gagosian Gallery 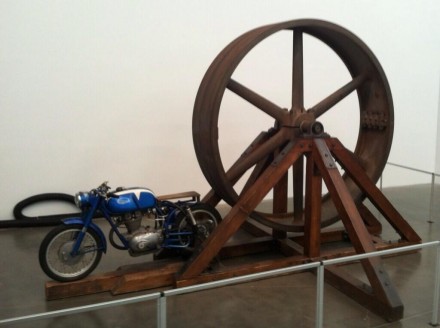 This entry was posted on Friday, October 4th, 2013 at 12:00 am and is filed under Art News. You can follow any responses to this entry through the RSS 2.0 feed. You can leave a response, or trackback from your own site.