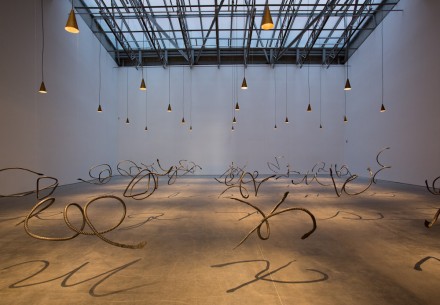 Now through October 26 Damián Ortega will be on view at the Gladstone Gallery’s 21st Street Location in New York City. Ortega’s photography, installation and sculptural work resonate with an early career as a political cartoonist. Through explosion and disassemblies, Ortega seeks to pry apart the underpinnings of the appliances and structures that establish the material element of human existence. His work engages themes of space, movement and situation in an attempt to dislocate conditions of the mundane. Damián Ortega is considered one of the most prominent artists of the new Mexican generation, and has held solo shows throughout Europe, North and South America. 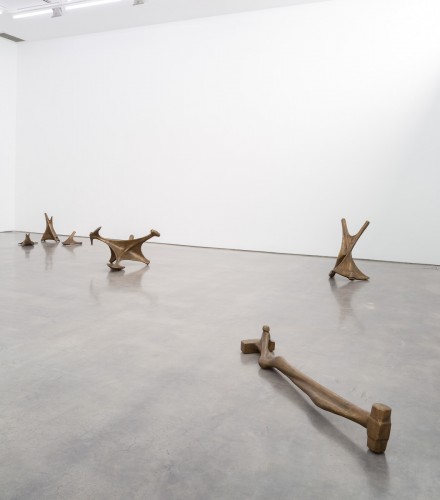 For this exhibit, Ortega takes as a focus the question of language. As material process, vehicle for communication, and fragmented transience, words and letters are challenged through deeply playful and provocative compositions. In the main gallery space, a large-scale steel installation hangs. 25 Twisted sculptures are illuminated by spotlights that cast shadows on the floor of the gallery in the shape of letters of the alphabet. Ortega’s signature interest in exploring the formal structures at work in our daily lives carries over in this show, and expands to encompass abstract questions of the breakdown and fragmentation of language. 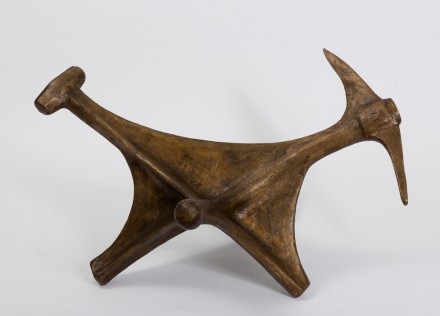 Through this work, the political implications of language are described, as words and letters become form twisted and manipulated into workable form. The underlying social and political deconstruction that colors most of Ortega’s work becomes a central question to this work. Both the unforgiving and the malleable limits of language resonates in the steel sculptures and compilations that are sewn together to form a coherent show full of grace and suggestions. 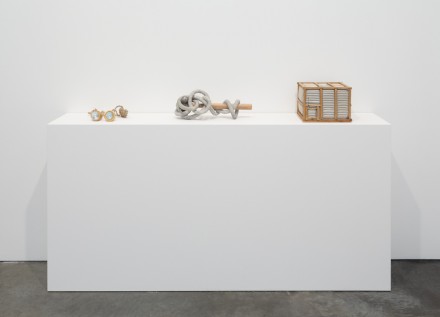 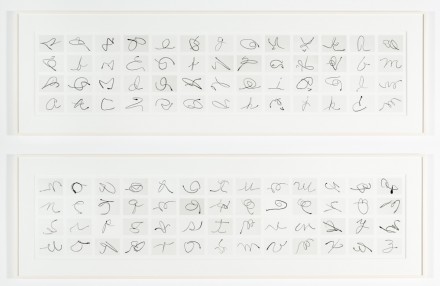 One of this show’s greatest successes is its ability to prioritize physical form while signaling the metaphysical human implications and concerns. The work of Ortega, and this exhibition in particular, illustrates the potential of the physical aesthetic space as the transmission of the linguistic immateriality of the signified.

This entry was posted on Thursday, October 24th, 2013 at 11:37 am and is filed under Art News. You can follow any responses to this entry through the RSS 2.0 feed. You can leave a response, or trackback from your own site.