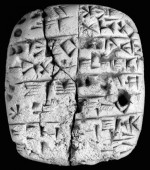 Cornell University in Ithaca has announced that it will return a vast collection of cuneiform tablets to the country of Iraq, in what is already being called one of the largest antiquities returns by an American University ever.  The tablets are suspected to have been looted during the 1991 Gulf War.  “We’re not accusing anyone of a crime, but we believe they should be returned,” says Assistant U.S. Atty. Miro Lovric.Read more at the LA Times

This entry was posted on Saturday, November 9th, 2013 at 2:24 pm and is filed under Art News. You can follow any responses to this entry through the RSS 2.0 feed. You can leave a response, or trackback from your own site.