Currently on view at Skarstedt Gallery’s uptown space is a series of 13 works by David Salle, from his Ghost Paintings series.  Executed in 1992, these busy, color-inflected works were created from a series of photographs, documenting improvised actions with an enormous white sheet.  Taken as a whole, the works create a dialogue on the image as the result of a series of practices, processes and flows, rendering a final piece that belies its mode of creation in subtle ways. 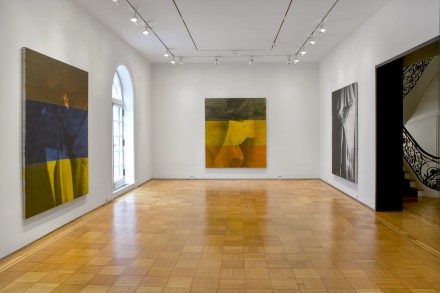 Starting with the movements and photos of his longtime model and collaborator Beverly Eaby, Salle took the resulting shots, and printed them onto enormous linen sheets using dark room printing processes, then stitched the sheets together, resulting in large-scale, stretched works that exhibit slight alterations and flaws in the surface of the image, jagged points where the lines of the photograph fail to come together.  From here, Salle coated the canvases in calligraphy ink, leaving colorful bands of color that demarcate the separation of the final work into its contingent pieces.

It’s an interesting take on the photograph, welcoming a nearly infinite set of variations to enter into the production of the work.  The mechanical geometry and spontaneous act of laying ink onto the canvas becomes increasingly intermeshed, as the breakdowns in form and divergence of lines force constant reappraisal of the artist’s final work.  Additionally, the bold flurries of ink occasionally obscure portions of the photographic image, which, already blurry from the lack of lighting in some areas, becomes further obscured.  In one piece, the hand of his model is almost buried beneath a thick layer of teal, making the work all the more ghostly.

Salle seems fascinated with remainders here, with the subtle interplay of fragments and pieces left over as his subject moves from body to photographic negative, negative to print, and print to painting.  His work becomes an act of translation, of willfully changing the grounds of the medium with each subsequent formatting.  Throughout, the modes of work are emphasized, leaving a slight trace of each prior state as it moves towards its final result, all the while allowing layers of construction to remain engaged in the foreground.  For Salle, the ghost is, in equal measure, his model, his theme, and his mode of production.

Ghost Paintings is on view until December 21st. 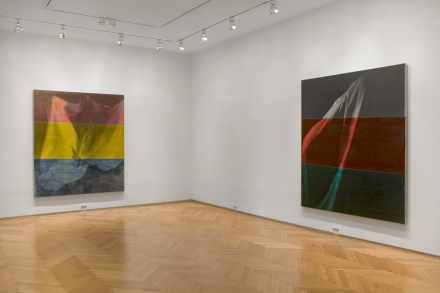 This entry was posted on Sunday, November 17th, 2013 at 12:00 am and is filed under Art News. You can follow any responses to this entry through the RSS 2.0 feed. You can leave a response, or trackback from your own site.