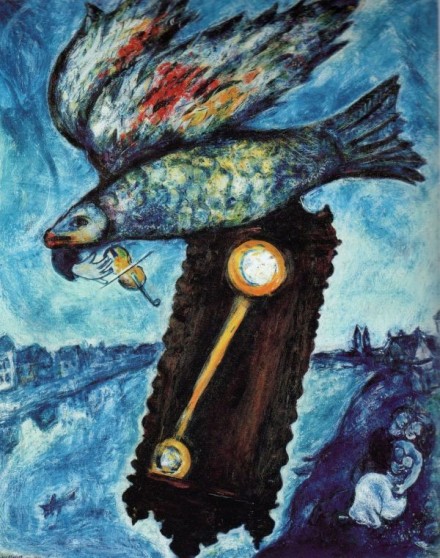 A new exhibition entitled “Chagall: Love, War, and Exile” is currently on view at The Jewish Museum in New York, reviewing the part of Marc Chagall’s career during the rise of European fascism in the 1930s through 1948 while he was living in Paris and New York. The exhibition includes 31 paintings and 22 works on paper. 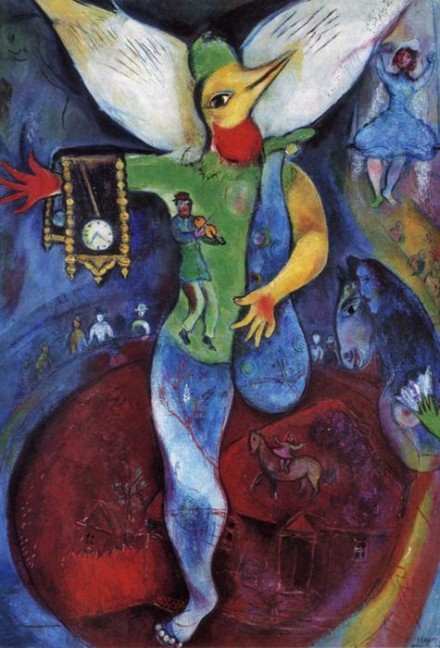 Marc Chagall, The Juggler (1943), via The Jewish Museum

Born in 1887 in Belarus, Marc Chagall has become known as “the quintessential Jewish artist of the twentieth century,” as art critic Robert Hughes once wrote, as well as “the last survivor of the first generation of European modernists,” according to art historian Michael J. Lewis. Before the First World War, Chagall traveled between St. Petersburg, Paris, and Berlin, then spent his time during the war in Soviet Belarus, when he became a prominent member of the modernist avant-garde movement.  After the war, the artist was part of the “golden age” of modernism – Paris in the 1920’s. Chagall stayed in France through 1941, during which time his art was removed from German museums, labeled “degenerate” by Nazi official Joseph Goebbels and his committee, and the process of deporting Jews to concentration camps had officially begun. With the help of Alfred Barr of the New York Museum of Modern Art and Hiram Bingham IV, the American Vice-Consul in Marseilles, Chagall was rescued from Nazi occupied France and smuggled to America, only narrowly escaping deportation. 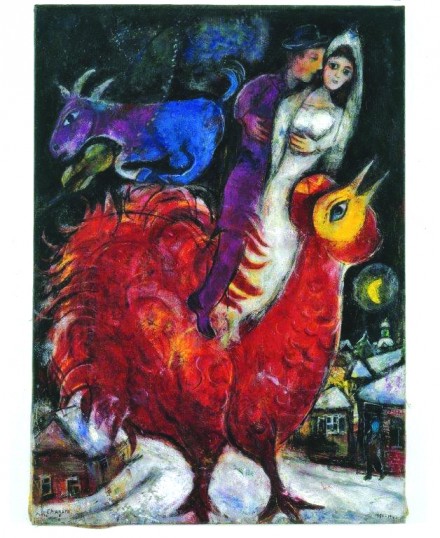 In New York, Chagall lived on the Upper East Side and befriended Piet Mondrian and André Breton. During this time Chagall became more interested in the current events in Europe.  It was only at this time that his artwork reflected the weight and extremity of the Nazi occupation. In 1944, Chagall was devastated by the death of his wife Bella, who died of a virus due to lack of wartime medicine. After this point, his paintings were centered around his memory of her. In 1947, Chagall returned to Paris where he stayed until his death in 1985. 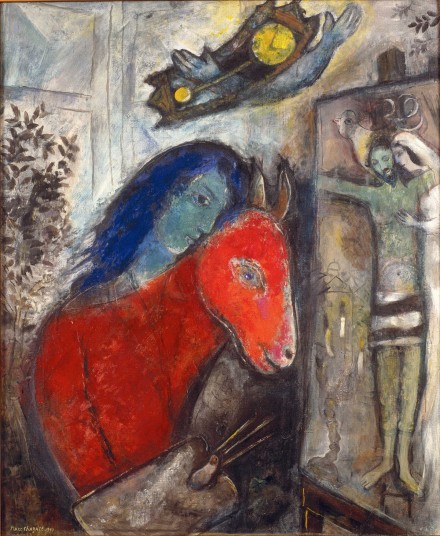 Marc Chagall, “Self-Portrait with Clock,” (1947), via The Jewish Museum

Chagall’s style evolved from a combination of folk art, Russian Christian icons, Cubism, and Surrealism. The current exhibition shows Chagall’s response to being an exile in the midst of the war, between the mid 1930s and 1948, portraying the concept of suffering caused by war in general, as well as his own personal, intimate sorrowful feelings.  Blending personal imagery with weighty symbolism and a thickly evocative style, the show is an impressive exploration of a major period in Chagall’s life.

In addition to paintings and drawings, the exhibition also includes letters, poems, photos, and items from the artist’s life. The exhibition opened at the Jewish Museum in New York on September 15, 2013, and will continue through February 2nd 2014. 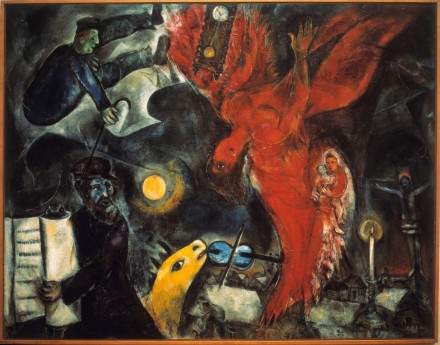 This entry was posted on Tuesday, November 5th, 2013 at 12:00 am and is filed under Art News. You can follow any responses to this entry through the RSS 2.0 feed. You can leave a response, or trackback from your own site.