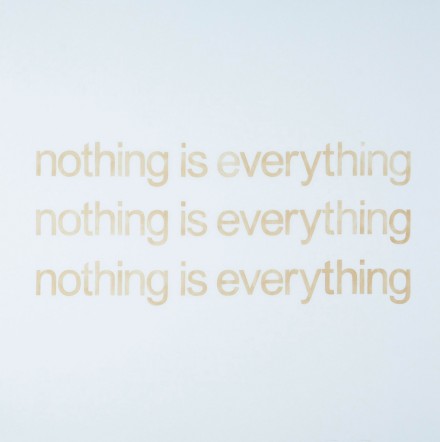 Mike Bouchet, Nothing is Everything 3 Times (Positive) (2013), via the Marlborough Chelsea

Mike Bouchet explores the adage, “You are what you eat,” if what is ingested contains zero-calories, in his new exhibition Flood at the newly renovated Marlborough Chelsea Gallery. The exhibition casts a mirror on to how our society digests all that it can from the media, regardless of nutritional content or health benefits.  Through Bouchet’s critical stance, everything ingested is about as substantial as Bouchet’s own blend of diet soda. 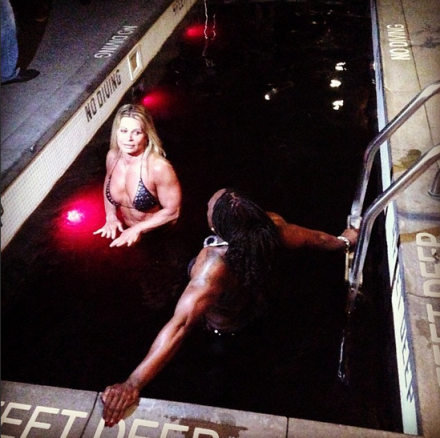 Bodybuilders in a pool of Diet Cola, by Mike Bouchet at Hotel Americano, via Ben Richards for Art Observed

Throughout Flood, repetition plays a reoccurring role, as if to prime the viewer for the experiences and themes contained within. The first visible piece upon entering the gallery is Nothing is Everything 3 Times (Postive).  On a square cotton canvas, Bouchet has written the triple declaration that “nothing is everything” in zero-calorie cola. Glaring in spite of its simplicity, Bouchet draws attention to the phrase through the staccato spacing and triple repetition of the three words. 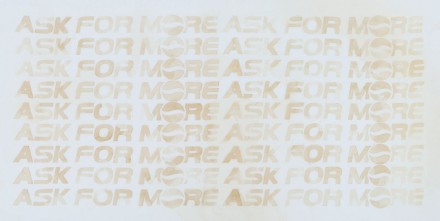 Mike Bouchet, ASK FOR MORE (2013), via the Marlborough Chelsea

Nearby, Bouchet’s Ask For More drowns the viewer with that titular Pepsi slogan eighteen times. Similar to J.D. Salinger’s Jesus Prayer in his classic work Franny and Zooey, the multiplied motto “Ask For More” fills the entire canvas, and forms its backdrop until the words become subconscious and imperceptible.  In equal measure, the discoloration caused by the golden caramel come to the fore. Bouchet’s Zero Gravity also provokes the unconscious, a Zen koan asking the almost incomprehensible question, “Why not shopping bags with zero gravity?” 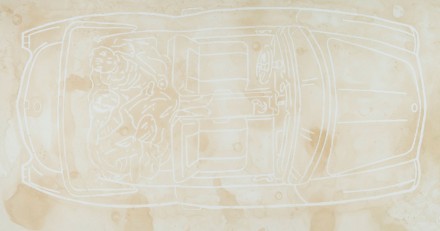 For referencing a deluge with the title Flood, Bouchet’s exhibition resounds most with ideas of emptiness, particularly in his sculptural work Olsen Twins Jacuzzi. The name implies the lollipop-purple sculpture is made for two, but the sculpture is unfortunately not wide enough for even a single person to taste that pleasure. Other works, like Double Cowman Country and Picnic, use the white, negative space of the canvas to reference lines and outlines, similar to some images perceived in a Rorschach test. 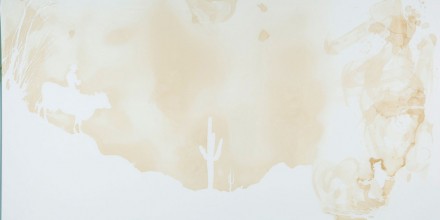 In the upstairs gallery lies Bouchet’s untitled video piece, showing a multitude of small swatch-sized clips of pornorgraphy. Like a modern-day “Ode on a Grecian Urn,” the infinite loop keeps the clips within an eternity of action with no end in sight. When viewed from afar, the video appears to be an undulating mass of flesh set to a grid. Upon close inspection, the pixelated projection becomes too grainy to discern anything. As a result, the video conveys a shell of information as it is obvious what is going on, but picking apart any one porn swatch is impossible, particularly resonant given the title of the show. 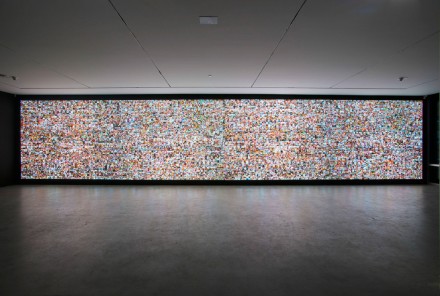 It its totality, Flood alludes to a variety of ideas about matter without substance. With the paintings in the main gallery, the shadow of the soda dye on the canvas is the only evidence of artistic presence. The Jacuzzis look as if they could be operational, if they did not also look like they were made of cardboard. Upstairs, the video clips are obviously pornographic, but analyzing them is almost visually impossible. Even Bouchet’s event at the Hôtel Americano, where he filled the pool with flat diet soda and two female bodybuilders embodied an insipid response.

Flood is on view until November 9th at the Marlborough Chelsea Gallery. 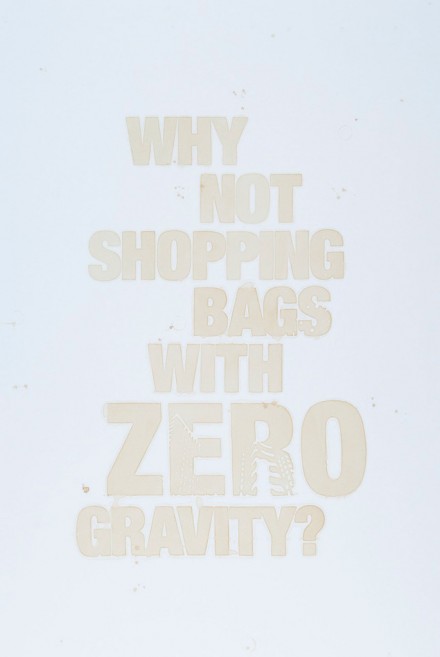 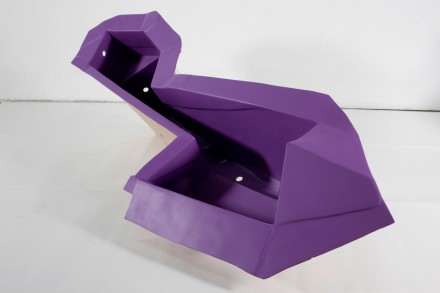 This entry was posted on Sunday, November 3rd, 2013 at 12:00 am and is filed under Art News. You can follow any responses to this entry through the RSS 2.0 feed. You can leave a response, or trackback from your own site.