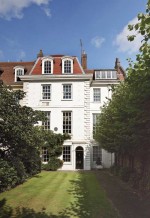 96 Cheyne Walk, the former East End London home of painter James Whistler, has been placed up for sale, with an asking price of £30 million.  The artist lived there for just over 10 years, from 1867 to 1878m during which time he created his most iconic work, Arrangement in Grey and Black No. 1, affectionately referred to as Whistler’s Mother.  Other residents of the Chelsea street have included Dante Gabriel Rossetti, George Eliot, Henry James, former British prime minister David Lloyd-George, Laurence Olivier and the musician Mick Jagger.

This entry was posted on Sunday, November 3rd, 2013 at 1:00 pm and is filed under Art News. You can follow any responses to this entry through the RSS 2.0 feed. You can leave a response, or trackback from your own site.