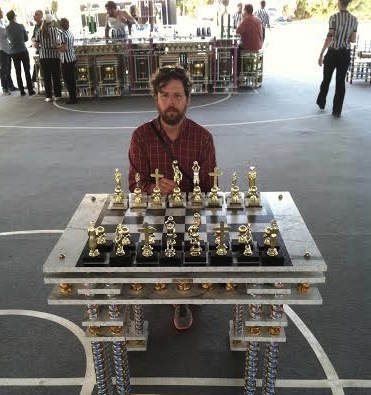 Ry Rocklen loves sports, or rather, he likes winning. “I love the pageantry of it,” he says, walking past a table constructed entirely out of materials used in sports trophies: shining columns, golden basketballs and baseball players, and imitation marble.  The pieces could be seen at Rocklen’s installation Night Court, a commission for Absolut’s beachfront space on Miami Beach during Art Week.  “The pieces originally come from a series called Trophy Modern that I opened earlier this year,” Rocklen says.  “And when I was offered the commission for this show, I thought I would try and take it a little further.” 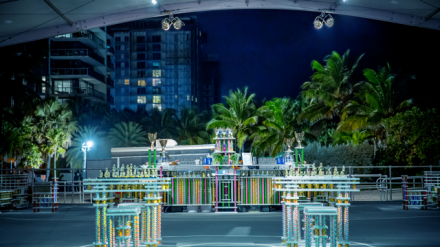 The resulting works are somewhat fitting in the architectural landscape of Miami.  The multi-layered columns and forms of his bar in particular bear a striking resemblance to the recently completed Pérez Art Museum located just across Biscayne Bay.  “I like way it fits into an industrial model of working, it’s very anonymous.  I just call up the company that I order from, tell them I need, say, 20 pieces of item #0279, and so on.  The catalog is this thick.”  He adds, measuring out about an inch and a half with his thumb and forefinger. 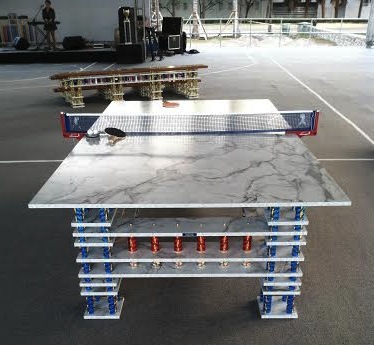 A ping pong table at Night Court, via Daniel Creahan for Art Observed

Reprising this same process, Rocklen has created a full sports milieu underneath the awning of Absolut’s beachfront space, complete with basketball lines running the length of the floor, and event workers dressed in shining silver uniforms. “I wanted a full sports set-up, so we designed jerseys for everyone on site, using these invented symbols instead of standard numbers,” Rocklen adds.  The event also includes a fully curated performance series, with appearances from Ariel Pink, Night Jewel, and more, as well as a series of intriguingly designed chess sets, using trophy toppers as the figurines. “I don’t really play chess, but looking at these pieces, they just make sense assembled into a chessboard.”  Rocklen notes. 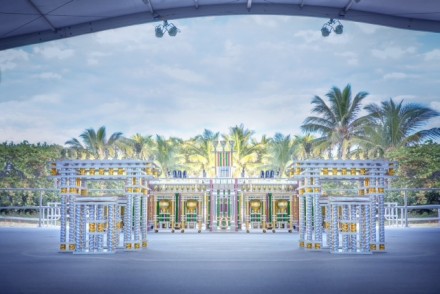 The situation is complicated by the fact that all of Rocklen’s pieces for the show are for sale.  “I’m not really sure what I’m going to do with all of these afterwards.  If I don’t sell these the storage costs are going to kill me,” he says, looking across the enormous makeshift court at the impressive number of pieces on view.  “What I really should do is get a big warehouse space for all of these, and just turn it into a music and art space, I just have to figure out what to call it.”

Even with the honesty of the work, there’s something distinctively snarky about the pieces, as if they’re fully aware of their role as consumer objects, somewhere between functional design and full-on prizes for a daring collector.  “Trophies you can sit on,” he smiles.

This entry was posted on Friday, December 13th, 2013 at 7:54 pm and is filed under Art News. You can follow any responses to this entry through the RSS 2.0 feed. You can leave a response, or trackback from your own site.