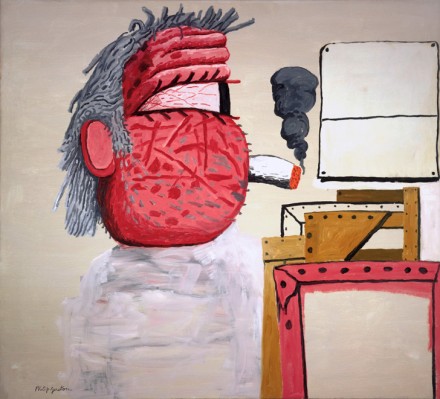 On view at Schirn Kunsthalle Frankfurt is an exhibition celebrating the 100th anniversary of the birth of American painter and printmaker Philip Guston (1913-1980), with a selection of around forty works from the later part of his career. 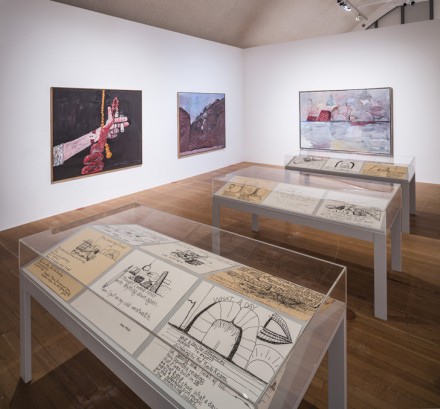 Born in 1913 in Montreal, Canada to Ukranian-Jewish refugees, Guston grew up in Los Angeles and began painting at the age of 14. He studied together with Jackson Pollock under John de St. Vrain Schwankovsky at the Los Angeles Manual Arts High School and participated in a one-year scholarship at the Otis Art Institute in Los Angeles, but aside from this brief schooling, Guston was an entirely self-taught artist.  Guston and Pollock were both expelled from the High School after publishing a paper opposing the school’s emphasis on sports over art, and after one year of study at Otis, Guston dropped out, feeling unfulfilled by the school’s approach to arts education.  He eventually went on to teach at the School of Art and Art History at the University of Iowa, Washington University in St. Louis, New York University, the Pratt Institute, and Boston University. 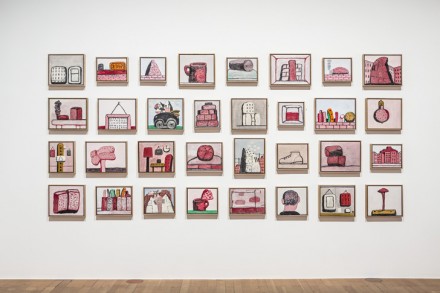 Philip Guston was a member of the New York School, along with many of the abstract expressionists such as Jackson Pollock, Mark Rothko, and Willem de Kooning. He is known for his leadership in the late 1960s of a transition from abstract expressionism to neo-expressionism in painting, shifting from “pure abstraction” towards cartooning and figuration. This change linking high art with images from pop culture was highly controversial, and he was originally criticized as having “betrayed” abstract art with these later works. 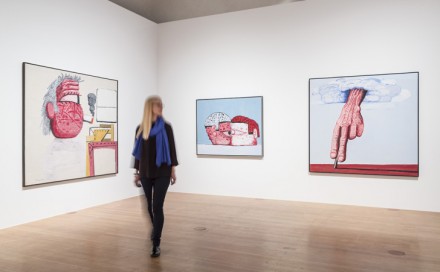 The paintings and drawings on view are reminiscent of 1920s comics, populated by coarse figures and fragments of body parts. The canvases are primarily pink, red, black, and blue, and the characters are grotesque, with large heads, hairy legs, awkwardly sized shoes. The architectural elements are only partial fragments, displaying only the bare minimum to get across his representations of doors, windows, and lamp bulbs.  Guston’s work stands out firmly from the rest of his New York school contemporaries, embracing a coarse, rugged style that could even be considered a precursor to the pop innovations of the post-war years.  Emphasizing the links between his work and that which would follow after him, the show is an intriguing introduction to Guston’s later techniques. 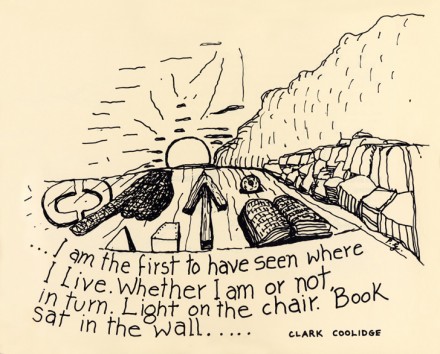 Philip Guston, Clark Coolidge: I am the first to have seen where I Live (1972-1976), Courtesy Schirn Kunsthalle Frankfurt

The exhibition at Schirn Kunsthalle Frankfurt opened on November 6, 2013, and it will continue through February 2, 2014. 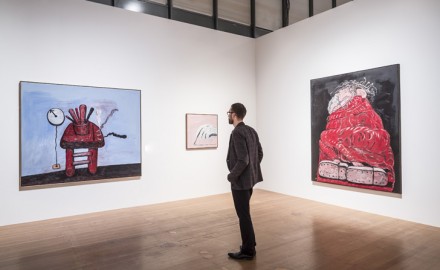 This entry was posted on Saturday, January 18th, 2014 at 12:00 am and is filed under Art News. You can follow any responses to this entry through the RSS 2.0 feed. You can leave a response, or trackback from your own site.