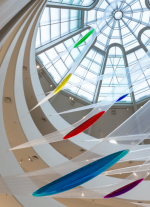 The Guggenheim’s proposed outpost in the Finnish city of Helsinki seems to moving forward, with the museum posting an international call for architectural proposals following the city’s agreement to set aside a parcel of land on the city’s South Harbor waterfront.  The competition “will provide an opportunity to deepen public discussion surrounding the proposed museum,” the institution said in a statement. “We also believe it will bring Helsinki the heightened level of international attention the city deserves as a vibrant cultural center.’’

This entry was posted on Tuesday, January 14th, 2014 at 5:37 pm and is filed under Art News. You can follow any responses to this entry through the RSS 2.0 feed. You can leave a response, or trackback from your own site.