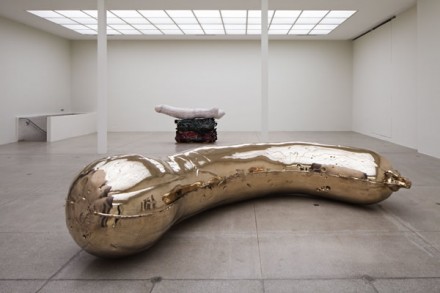 Vienna’s Secession gallery is currently presenting a show of new work by artist Sarah Lucas, including a set of large-format sculptures, an immersive installation and a number of large scale photographs that fit well within Lucas’s well-established body of work.  Exploring the political and psychological affects of various objects and sexual innuendoes, this time focused on the male genitalia, Lucas’s exhibition, titled Nob closes next week. 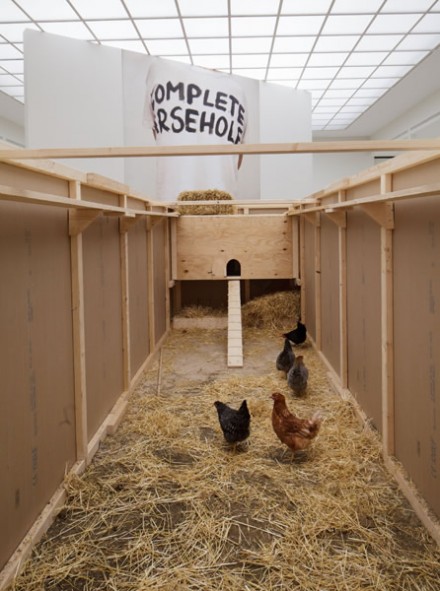 Taking its name from a colloquial term for the male anatomy, Knob invites the same sense of confrontational artwork that Lucas has based so much of her career on.  “Initially it was an antidote to all the tits and bums we seem to be bombarded with daily. It could also have something to do with the fact that I don’t, personally, have one. In any case I found it to be a perfectly self-contained sculptural form, ‘pregnant’ with meaning. A totem,” she said in a recent interview with The Telegraph. 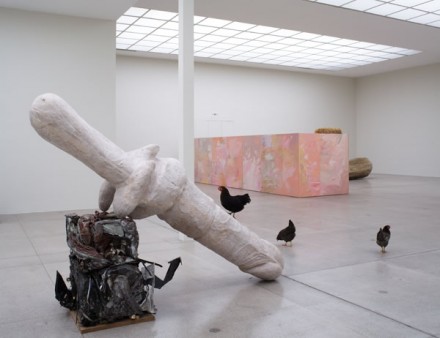 As is to be expected from Lucas, however, she avoids immediate address of this particular body part, dancing around it with her trademark Freudianism.  One work, an enormous bronze sculpture of what appears to be a sausage lays laconically on its side, a work which would seem relatively tame if it weren’t for the enormous, full-wall photograph of woman’s bare bottom sitting just across the room.  In another corner, Lucas places an enormous white penis sculpture atop a pile of compressed metal, a bizarre image that could be read as a metaphor for industrial might, or maybe just a dadaist juxtaposition. 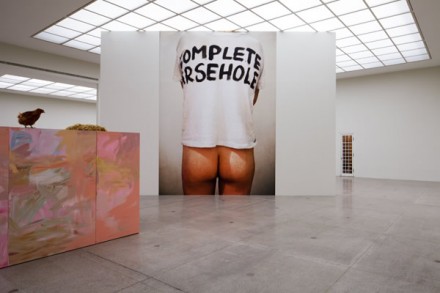 Alongside her own works, Lucas has invited artist group Gelatin to exhibit an installation alongside her own work: a bizarre henhouse installation filled with live chickens.  Given the space within the gallery, the hens are welcome to roam freely about and lay eggs, a material the Lucas has continually used within her own works.  Using an abstracted form of the artist’s materials, the accompanying work ties into Lucas’s oeuvre while she in turn offers a symbiotic home to these artists. 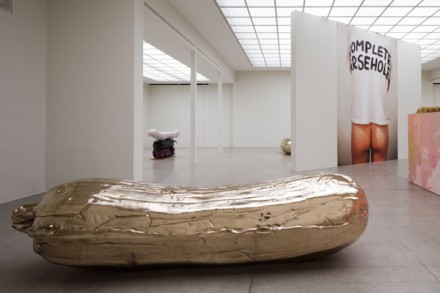 Throughout, Lucas manages a continued dance between titillation and banality, presenting subtle works that astound both in their size and ability to move between outright vulgarity and winking equivocation.  The exhibition is accompanied by a new artist book, featuring texts and photography of the artist’s work, including essays by Lucas, Jeanette Pacher, András Pálffy, and Julian Simmons. 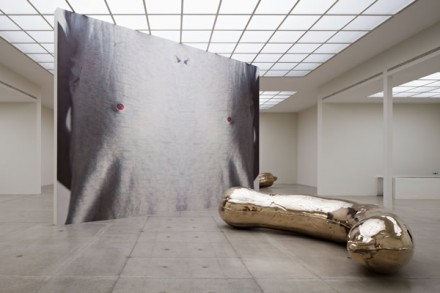 This entry was posted on Sunday, January 12th, 2014 at 8:09 pm and is filed under Art News. You can follow any responses to this entry through the RSS 2.0 feed. You can leave a response, or trackback from your own site.