AO-On-Site – Istanbul: A look at the growing gallery scene in Turkey’s Largest City 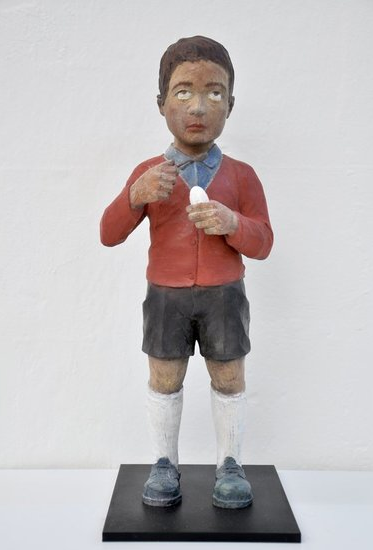 Yaşam Şaşmazer, via Osman Can Yerebakan for Art Observed

The winter conditions in the Turkish metropolis of Istanbul often border on excessive damp and gloom, but the coastal city’s burgeoning art scene maintains the city’s status as a location for adventurous art-lovers year-round, particularly given the strength of several shows currently on view across the city.  Mostly located around the Taksim area of the city, art spaces in Istanbul have been popping up at a remarkable pace, marking the city as a destination for the global art cognoscenti, while introducing young Turkish artists to the wider market.

Akbank Sanat, located close to Taksim Square, is a six-storied art center owned by one of the biggest banks in Turkey. The gallery’s exhibition space is currently hosting a group show titled Autonomous and Beautiful, bringing together twenty Turkish artists from a wide range of mediums including video, sculpture, collage and more, and aiming to initiate a discussion that revolves around individualism and the possibility of attaining a shared perception of aesthetics. 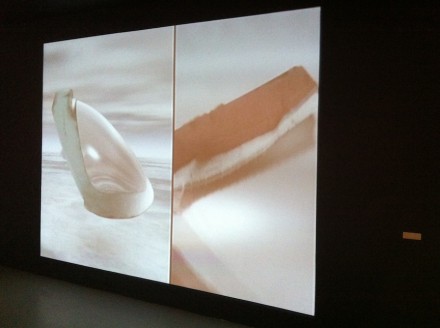 Huseyin Caglayan, Place to Passage (2003), via Osman Can Yerebakan for Art Observed

Hüseyin Chalayan’s futuristic 2003 video, Place to Passage, introduces a journey from London to Istanbul inside an egg-shaped vehicle, incorporating elements from the artist’s own identity (displacement and isolation, for instance) and helping construct an ode to a global identity. Nearby, Bing Bang, Yaşam Şaşmazer’s bronze sculpture, shows a toddler seconds before he breaks an egg, tracing a thin line between coping with the consequences of ill-given decisions and owning the results of determined choices. Upstairs, Şükran Moral’s Hamam awaits the visitors in a corner of the second floor, offering a more escapist environment for visitors. 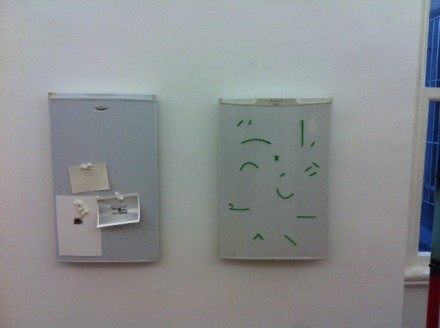 Ian Law, At 43 Kerimeikos (2013), via Osman Can Yerebakan for Art Observed

A fifteen minute walk in the opposite direction from Taksim Square brings one to Rodeo Gallery, a repurposed apartment currently showing Burn these eyes sailor, and throw them in the sea!, alluding to the historical residue of the space itself as both materialist and ideological. In the course of physical and mental consumption, all the discarded waste of the space is becomes the target of the artists on view. Andy Coolquitt’s Multi Marfa, for example, is a highly industrialized sculpture that he made using multicolored metal pipes, wire and a light bulb. Referring to the basic understanding of the ready-made through a contemporary perspective, Coolquit’s sculpture aims to redefine certain basic industrial elements such as metal or glass to reappropriate as art objects. 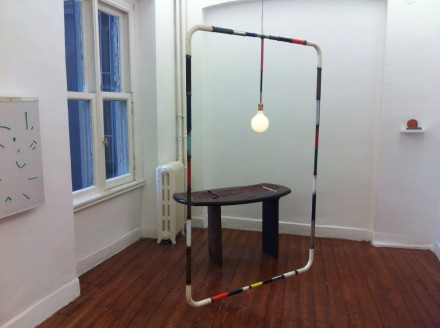 Next to this sculpture stands Ian Law’s At 43 Kerimeikos, presenting kitchen décor with two discarded fridge doors from a previous era. One the of the doors is adorned with magnets of Casper the Friendly Ghost, in his well known cartoon form, again reminiscing of a long gone era in time, while the other door carries sporadically placed green tubes, evoking some trace of hidden meaning. Blurring the line between domestic intimacy and neutralized consumeristic identity, Law’s work perpetuates the problem of standing out as a unique individual in a world where even the materials we waste are identical. 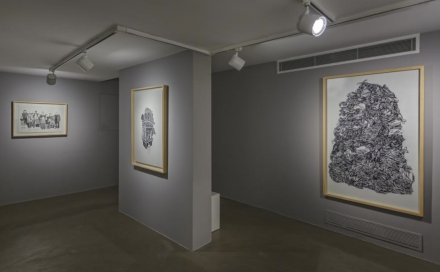 Çağla Köseoğulları, Out of Place (Installation View), via Osman Can Yerebakan for Art Observed

At the opposite end of Istiklal District, Taksim’s main street of shops and attractions, sits Sanatorium. First started as an artist collective, and later expanded to a three-storied art gallery over the course of several years, Sanatorium is one of the largest galleries in Istanbul. It is currently hosting Out of Place, a solo show by Çağla Köseoğulları, in which the artist explores the ignored or the suppressed; be that subconsciously or intentionally. Lives that have diminished in the midst of an ongoing social chaos are meticulously dissociated by the artist, becoming elaborately drawn evidences of these same lives. Extremely detailed outfits and dramatically portrayed facial expressions give each individual a unique existence and a distinct self. The tiny hints of collective memory strive for visibility, as they are elegantly faced with each figure’s micro-historic reality. Köseoğulları’s subtle yet determined study on the dismissed through her expressive drawings offers viewers an engrossing journey to the other side of the coin. 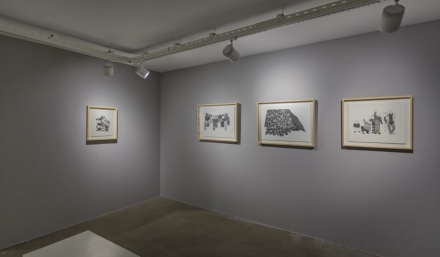 Çağla Köseoğulları, Out of Place (Installation View), via Osman Can Yerebakan for Art Observed

These three exhibitions, among many others, demonstrate the increasingly notable stature of Istanbul in the national arena.  Thanks to the growing number of new spaces opening, along with certain established venues presenting considerable programs, Istanbul is finding itself a spot in the international art platform.

This entry was posted on Sunday, February 23rd, 2014 at 12:00 am and is filed under Art News. You can follow any responses to this entry through the RSS 2.0 feed. You can leave a response, or trackback from your own site.