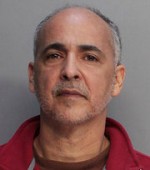 Maximo Caminero, a 51-year old artist living in Miami has been arrested after reportedly smashing one of Ai Weiwei’s painted Ming vases on view at the Perez Art Museum.  The destruction of the vase was said to have been over the lack of local artists on view at the Miami Museum. “The argument does not support the act,” Ai Weiwei said in an interview over the incident. “It doesn’t sound right. His argument doesn’t make much sense. If he really had a point, he should choose another way, because this will bring him trouble to destroy property that does not belong to him.”

This entry was posted on Wednesday, February 19th, 2014 at 11:24 am and is filed under Art News. You can follow any responses to this entry through the RSS 2.0 feed. You can leave a response, or trackback from your own site.