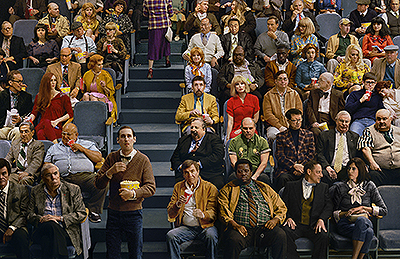 With a double show at Lehmann Maupin’s New York galleries, entitled Face in the Crowd, and another exhibition in Corcoran’s DC gallery, photographer Alex Prager has emerged from Los Angeles to take up major art world real estate this winter. Prager’s work is instantly recognizable, a savvy blend of mid-century nostalgia repackaged for our current moment, and it seems the rest of the fashion and art world have finally caught up with her. 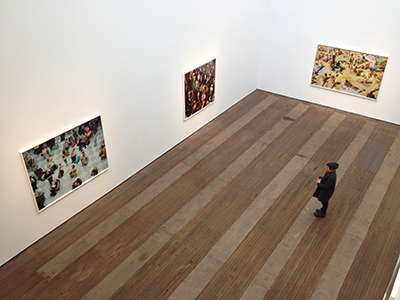 A self-taught artist who began her career in 2008 with the exhibition of her show A Big Valley, Prager received her first major nod of approval when she was featured in MoMA’s 2010 New Photography exhibition. Her work draws heavily from American cinema and often features sultry femme-fatales, ingenues staring doe-eyed at the camera, and women stranded on the side of the road next to broken down cars. These images reference Hitchcock explicitly, as in the photo of a blonde woman surrounded by a pack of wild birds, but they also have a dreamy quality one might associate with the middle period of David Lynch’s oeuvre – simultaneously bubblegum and foreboding. However, these photos, almost exclusively of women, also manage to pull off a kind of camp critique of the masters to whom they refer, especially in the portraits of the more bedraggled women, whose wigs sit askew, or who swim languidly in a parking lot pond. Prager’s use of period costumes and reliance on narrative may remind viewers of early Cindy Sherman, though Prager herself is rarely the subject of her work. 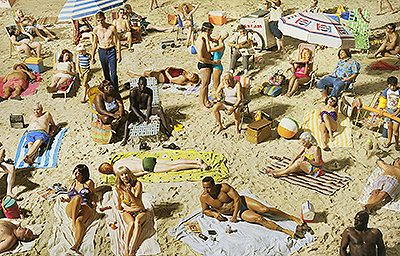 In Prager’s current show, she continues to explore the relationships between photography and film, creating a cast of recurring characters who populate busy, large format group scenes reminiscent of Where’s Waldo or the oils of Bruegel, if Bruegel painted twee Americans instead of Flemish peasants. These crowd shots in “Face in the Crowd” are well-composed bird’s eye views, all of them drenched in color. Prager has often pointed to William Eggleston as one of her forebears, and one sees this parentage in her repetition of pink, blue and white stripes, and flecks of yellow in Crowd # 3 (Pelican Beach). Prager has also taken another cue from Hollywood, presenting some of her photos as vertically oriented filmstrips, further emphasizing the diegetic nature of her work. Unfortunately, the quality that most distinguishes her newer work from past series is the increasingly artificial lighting and stilted affect of her subjects. The group shots and short film on display in the exhibition feature an enormous cast of actors, each of whom twist and contort their faces or stare slack-jawed as if to better convince the viewer of the photographic illusion. Occasionally an image will include someone tucked away in a corner, staring up at the camera, or squinting through binoculars as if to provide the viewer with one last wink.

Again as in past work, her subjects are dressed in a bricolage of styles, though most are clothed far more formally than the usual crowd in an airport or on a street corner . The men’s ties run the gamut from pencil thin to the size of large napkins, and the women seem to have walked out of the closet of Zooey Deschanel. The red lipstick is in full force, too, this time splashed across the mouth of actress Elizabeth Banks, who stars in many of Prager’s photos as well as a three-channel short film installed in the back of Lehmann Maupin’s Chelsea space.  The film begins as a series of interviews with characters the viewer may recognize from the crowd shots, chopped and screwed to the edge of intelligibility. These people tell random anecdotes, the stories of their lives, or simply stare at the camera, each dressed in the costume he or she wore in the photos. Two bikini-clad women, leathery from the sun and just a little past their prime, laugh about their friendship and romantic follies. One young uni-browed person of indeterminate gender recounts the story of how they immigrated to the US from Eastern Europe. (A large number of these actors have either fake or real uni-brows, and many of their appearances border on the grotesque. ) An old woman talks about her lost youth. With only the building classical score as warning, the film fades to black, only to restart, this time following a young woman dressed in white and played by Banks, who wanders through crowds in a fog of alienation and anxiety. 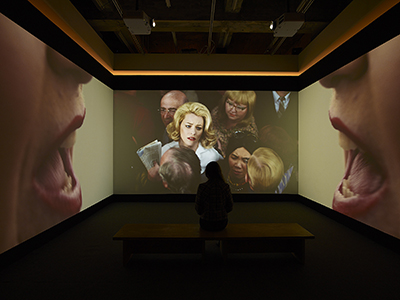 The film puts into motion what the viewer has so far seen captured in the stills hanging on the gallery walls. Crowds of anachronistically dressed people hum and mill about in public spaces, each person absorbed in their own world. We follow Banks as she moves through these spaces, confused and increasingly overwhelmed by the noise and congestion. Suddenly, a woman is screaming, and then the crowd freezes around Banks, whom we watch from above as she grapples with her isolation among so many people. 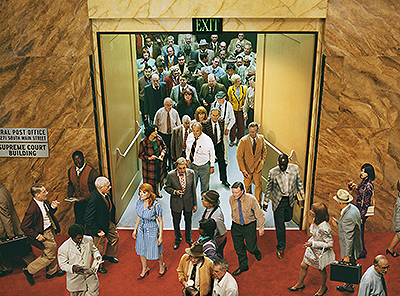 Prager’s star is clearly on the rise in both the fashion and art worlds. Her ambition and sense of style are indubitable, but here are taken to their ostensible limit, sitting above and directing huge crowds and bodies into dense configurations.

This entry was posted on Tuesday, February 18th, 2014 at 12:00 am and is filed under Art News. You can follow any responses to this entry through the RSS 2.0 feed. You can leave a response, or trackback from your own site.