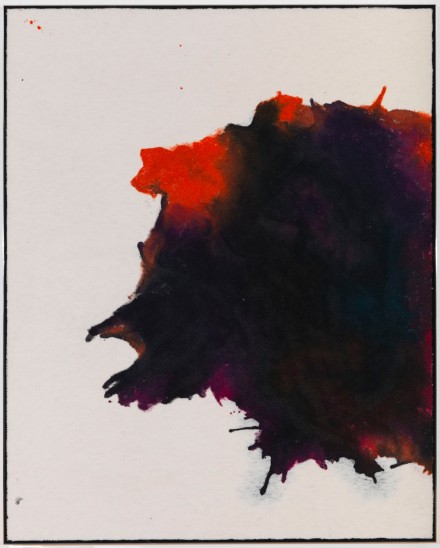 For his first solo exhibition at Marianne Boesky Gallery since joining in 2012, artist Andisheh Avini presents a refined selection of recent works, informed by the artist’s own personal experience of his Iranian heritage, a subjective approach that he ultimately uses to explore broader and more collective notions regarding the relevance of both memory and imagery. 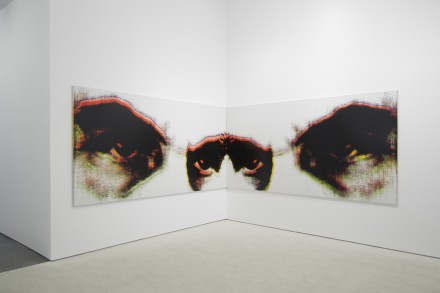 Walking into Marianne Boesky’s recently renovated gallery, the viewer is initially confronted by a white-carpeted exhibition space. Here, two large-scale silk-screened canvases meet in a corner, impressively depicting the eyes of Ayatollah Khomeini, the larger-than-life revolutionary figure who cast his long shadow over Iranian contemporary history and culture in the 1970s.  The image itself is appropriated and highly recognizable, and Avini uses a similar brand of dark Warholian Pop à la Chairman Mao, updating and revising it for a new historical locale.  The ominous, threatening atmosphere of this first encounter is tempered by the lush carpet paintings also on view in this room – a new practice for the artist, which marks its debut in this show. Deep, saturated colors and floating, amorphous forms commingle on the unexpected sensuality of a rather banal carpeting. These compositions play with modernist notions of surface and depth and the picture plane in a manner that is both clever and lush. 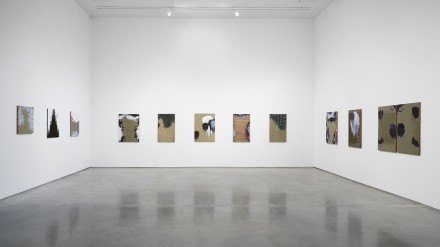 In the main exhibition space, a number of Avini’s smaller-scale works are displayed, presenting an aesthetic narrative to be deciphered by the viewer’s gaze. With these works, the artist looks to a more complex readymade material – marquetry panels, commissioned by the artist and handmade according to tradition in Iran. Avini disrupts the glossy finish and highly detailed geometric designs of the woodwork with silkscreen abstractions, whose forms are the diluted, essential incarnation of simple images (a lock of hair for example), but in which one can find an infinite number of associations. 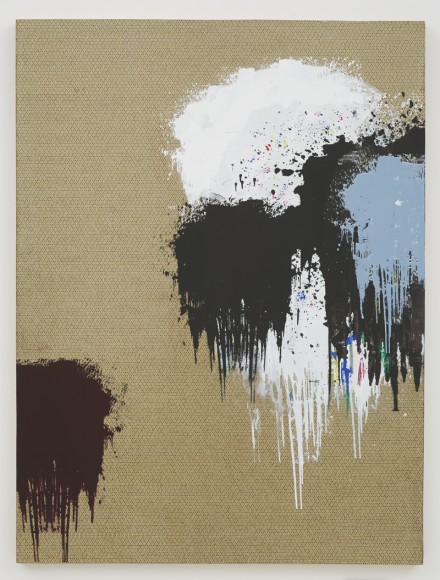 In other works, the artist introduces a new motif, the classic, symmetrical natural pattern of the peacock feather. The engagement of the traditional marquetry support and this multi-layered surface painting is fruitful. As the press release states, “In these palimpsestic hybrids, Avini’s overwriting obstructs and complicates the language of the traditional designs, both in a visual and conceptual sense.” 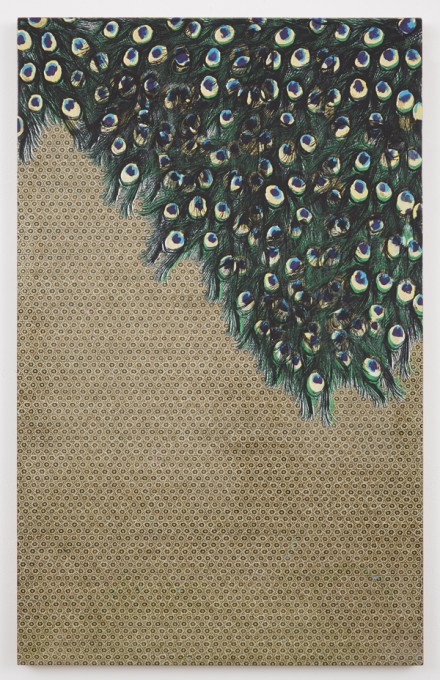 This entry was posted on Tuesday, February 11th, 2014 at 4:16 pm and is filed under Art News. You can follow any responses to this entry through the RSS 2.0 feed. You can leave a response, or trackback from your own site.