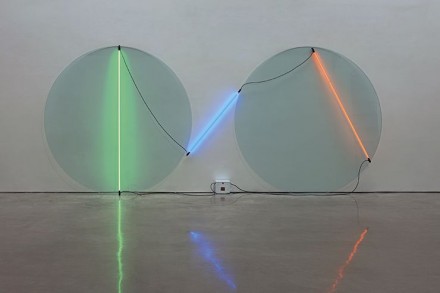 Pulling works from the beginning and current periods of the artist’s career, Pace Gallery is currently presenting two bodies of work by artist Keith Sonnier, showcasing an extended perspective on the artist’s work and its evolution.  Working alongside fellow post-conceptual artists interested in the capabilities for light and lighting in installations and mounted works, Sonnier first embraced the use of neon in his pieces in the late 1960’s, using panes of glass and wrapped neon lighting to emphasize the interplays and gradual shadings of color caused by reflection and spacing.  A number of seminal works from this period are exhibited here, including  Ba-o-Ba V, and Neon Wrapping Incandescent, influential pieces that marked Sonnier’s newfound interest in the capabilities for light in a sculptural work. 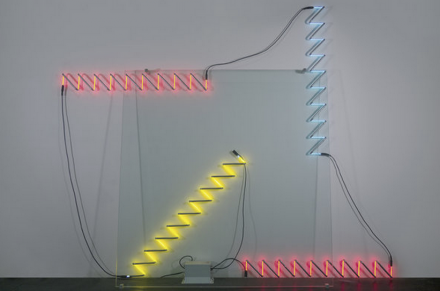 Ultimately, it’s this body of work the Sonnier still seems so indebted to.  While his early practice made much of his movement towards the glowing neon hues of his new materials, his new works, the Elysian Plain series, remain wholly interested in the light as a sculptural element.  Departing from the environmental experiments of Flavin or Turrell, Sonnier’s works continue along a path of  concern with the arrangement of materials, and their presentation in three-dimensional, material space. 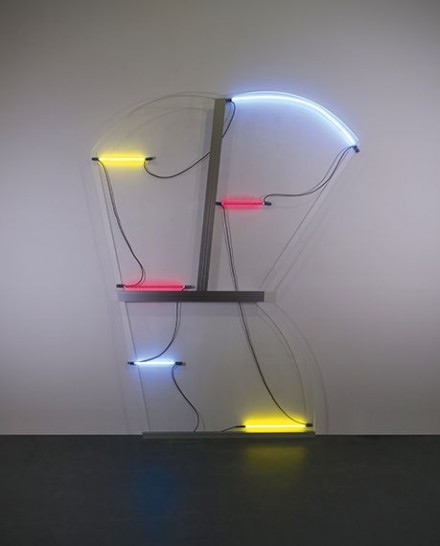 While the behavior of light is certainly central to his works, the material elements of the light mechanism remains significant in its presence.  The wiring and coiled power cables of the lights snake across the glass, creating bumps and shadows across the work where the light meets its various obstructions.  Torso Trunk, for instance, continues Sonnier’s signature techniques, but uses the various industrial materials (such as a hinge for joining sheets of glass), as compositional pieces.  The drifting cords of each light runs gracefully across the back of the panels, intersected by the thick grey joint.    It’s perhaps this note that makes Sonnier’s work interesting in comparison to his oft-cited contemporaries.  While others focused on the phenomenological capacity of light and its effects on perception, Sonnier remained focused on its structure and use, showing the necessary systemic construction alongside the behavior of light in space.

Offering a historical and material comment on Sonnier’s career, Elysian Plain + Early Works is on view until February 22nd. 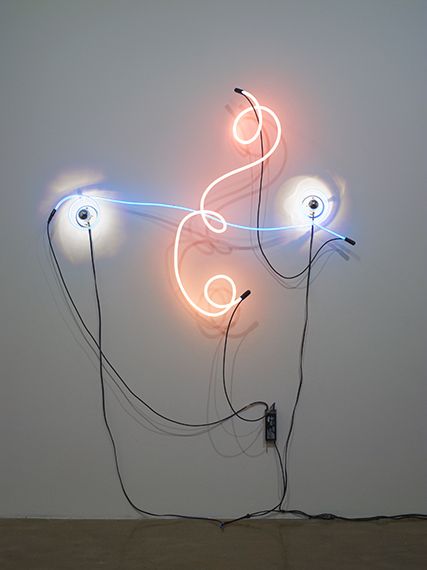 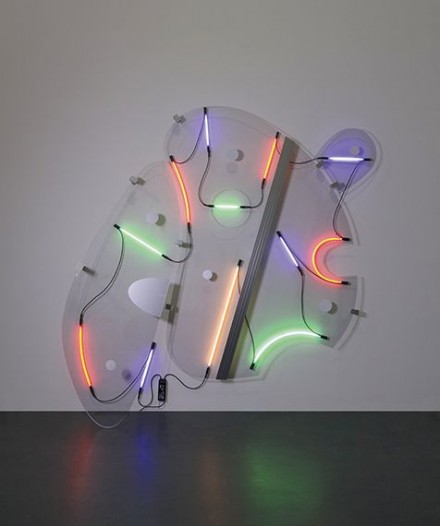 This entry was posted on Thursday, February 20th, 2014 at 12:01 pm and is filed under Art News. You can follow any responses to this entry through the RSS 2.0 feed. You can leave a response, or trackback from your own site.