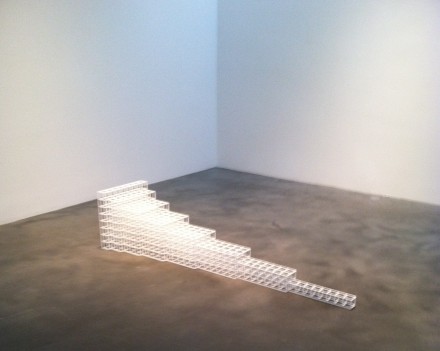 Sol Lewitt, considered by many as the founding father of conceptual modernism, is regarded as one of the most influential artists of the last half of the 20th century. The cube, as a “grammatical device” from which Lewitt’s work often develops speaks to his ambition to reduce art to its essentials, and approach the relationship between artistic creation and the mechanization of thought.  Lewitt is also known for his large-scale two and three-dimensional works, particularly his wall drawings executed in 1968. In these wall drawings, predetermined line-making procedures and formulas typically associated with commercial production were enlisted in the installation of this work across galleries.

Horizontal Progressions, now on view at Pace’s West 25th street gallery brings together seven structures produced in 1991, a rare exhibition featuring a complete series by the artist. Lewitt, cited in the press release for this show, comments that “using a simple form repeatedly narrows the field of the work and concentrates the intensity to the arrangement of the form. The arrangement becomes the ends while the form becomes the means.” This view is reflected in the serial nature of Lewitt’s work, which challenges viewers in its relentless repetition of hard geometric lines.  Pieces seem to gradually grow and develop as the viewer moves through the show, as Lewitt’s structures take on ever more complex series of cubes. 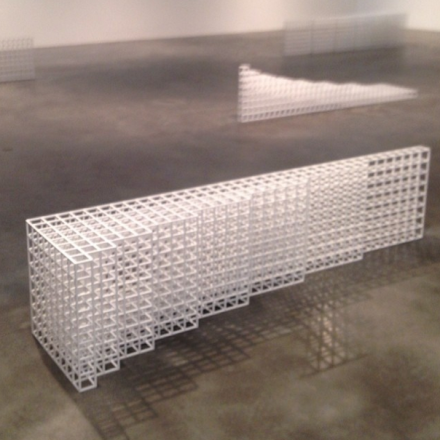 The show is a fitting continuation for Lewitt.  In 1994, the gallery exhibited the artist’s work in a solo show for the first time, titled Sol Lewitt: Wall Drawings, and he would continue to show with the space until his death in 2007.  The aluminum structures presented in this show are painted white, each with a different formation of identical open forms. This series explores multiple arrangements of these cubes in variations of eight sections.  Horizontal Progressions is Pace Gallery’s twelfth exhibition of Lewitt’s work.  In this show, the arrangement and rearrangement of cubes reveals this preoccupation with the potential for raw material to be translated into form.

This entry was posted on Wednesday, February 19th, 2014 at 12:01 pm and is filed under Art News. You can follow any responses to this entry through the RSS 2.0 feed. You can leave a response, or trackback from your own site.