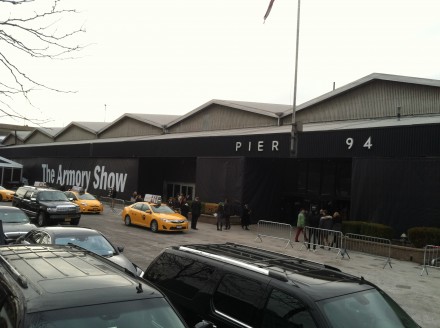 Outside the 2014 Armory Show, via Art Observed

The doors of The Armory Show opened this morning for its VIP preview, welcoming collectors and press from around the world to Piers 92 and 94 on Manhattan’s West Side.  This year, the fair welcomes 205 galleries to its annual selling event, down again from last year’s 214 in what seems to be a running trend to trim the fat at the larger fairs worldwide. 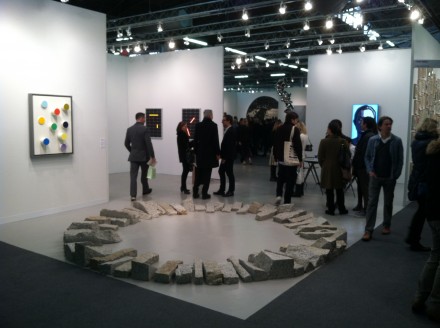 Even so, the sheer size of the fair offered more than enough for interested visitors, and Pier 94 was still amply packed with art from David Zwirner, Sean Kelly, Lisson Gallery and many more, while names like Marian Goodman and Gagosian remained conspicuously absent.  Lisson held a particularly strong booth once again this year, selecting works by Tony Cragg, Cory Arcangel and a large wall-mounted work by Anish Kapoor.  Nearby, a delicate cloud form sculpture by Leandro Elrich, formed by layers of smoked glass, also received considerable attention at the Sean Kelly booth. 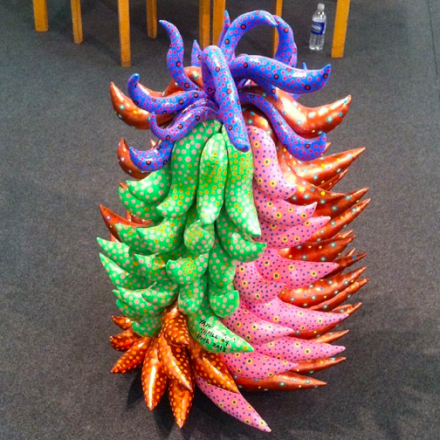 Other galleries were more daring this year, in particular Marianne Boesky, which brought the Johannesburg-based Serge Alain Nitegeka to the United States for his first fair showing in grand fashion.  Filling the majority of the space with his signature wooden supports, Nitegeka buried his more manageable paintings behind beam after beam of black wood and shipping crates, a clunky installation that rewarded intrepid viewers with an impressive set of paintings on the other side. 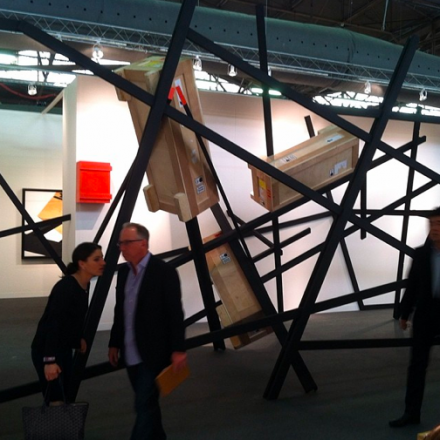 Sies+ Höke also brought a strong selection to the fair, including a delicate set of Kris Martin miniatures, contrasted by a set of vibrant paintings by Jonathan Meese behind them.  Meese’s work appeared in several booths this year, and it seems that his entry back into painting this year may earn him considerable attention in the art world this year.  i8 Gallery also had a strong entry this year, bolstered by a video of the S.S. Hangover, Ragnar Kjartansson’s band-based performance at Venice last year.  Playing on two screens, the video depicts Kjartansson’s repeated launching and docking of a boat serenading Biennale attendees with a delicate score by former Sigur Ros member Kjartan Sveinsson. 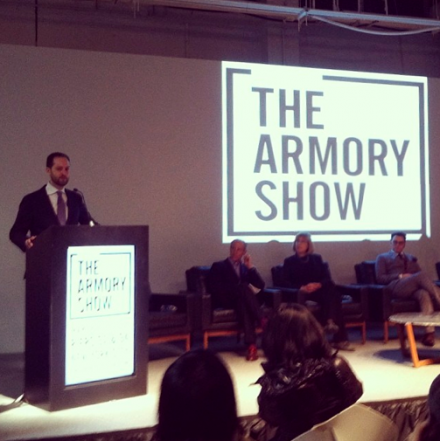 The special sections of the fair also drew particular attention this year, as Focus: China’s selection of 17 galleries from the country’s growing arts scene were given ample room to show off their wares.  A number of pieces demanded particular attention, including a project installed across the fair, installing fitness machines and various workout devices, intended for fair-goers to use.  The work, making reference to the Chinese Communist  Party’s encouragement of public fitness, was installed by collective Polit-Sheer-Form-Office, which uses cultural artifacts and recognizable cultural tropes to investigate the meaning of past cultural eras. 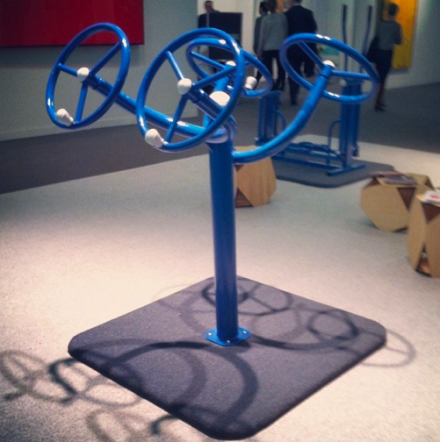 Armory Commission Recipient Xu Zhen also had a project at the fair this year, installing his Action of Consciousness piece in the center of the Focus: China lounge.  The performative sculpture, an enormous white cube from which objects occasionally are flung upwards, welcomes a momentary consideration of artistic forms and tropes, each piece appearing for only moments before it falls back into the cube.  In an adjacent gallery, Beijing’s Space Station was showing a colorful installation that resembled the shelves of a discount flea market, covered in plastic wrapped odds and ends, and soundtracked by a brisk rock and roll soundtrack. 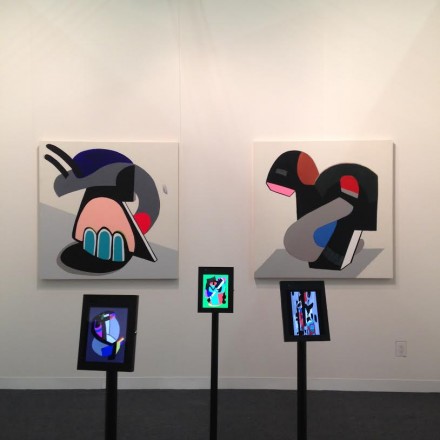 Also of note was Armory Presents, a selection of solo booths presented by a number of young galleries and first-time fair attendees.  Each selecting a single artist or a pair, the fair welcomed a snapshot of a number of upcoming talents.  Jessica Silverman Gallery was well-attended here, with a number of collectors vying for works by painter Hayal Pozanti.  By the end of the day, Silverman told Art Observed, the gallery had sold 7 of the 8 paintings on hand, as well as several of the artist’s limited-edition GIF animations, almost exclusively to collectors in New York and Los Angeles.  Higher Pictures also commanded attention for a small set of large optical pieces by Travess Smalley. 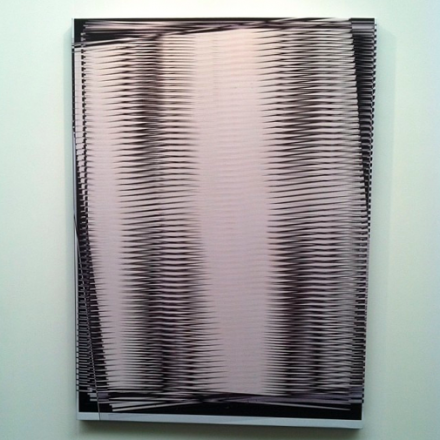 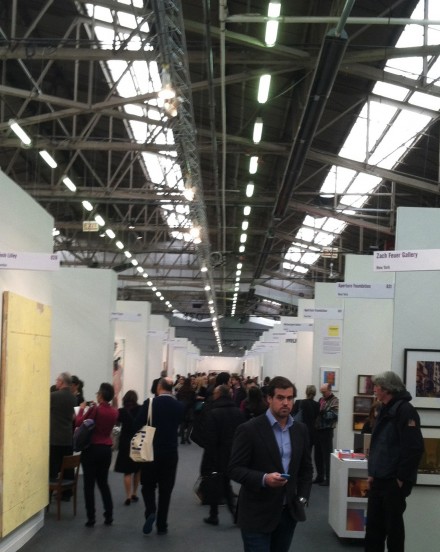 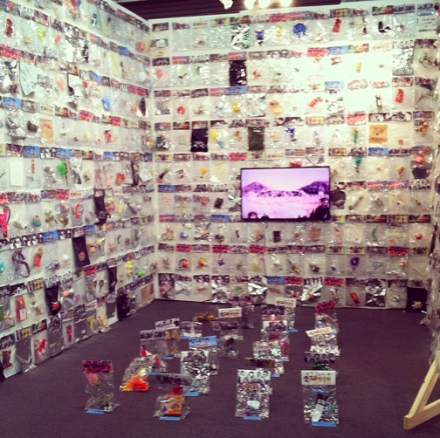 It was a strong start to the day, and sales seemed to match the high spirits of collectors, dealers and art advisors alike.  One anticipates that these strong results will continue through the week, as the fair opens to the public this Thursday. 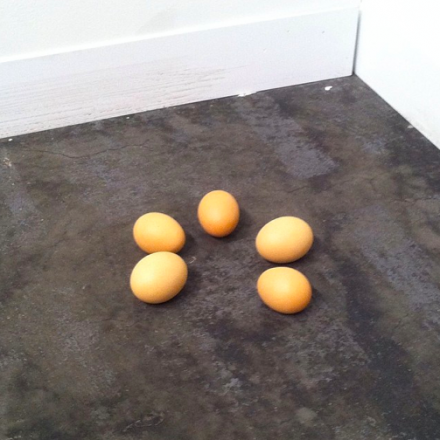 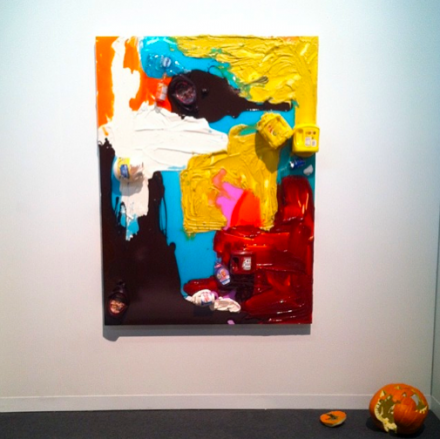 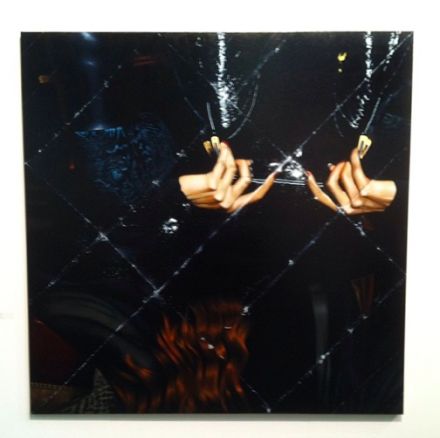 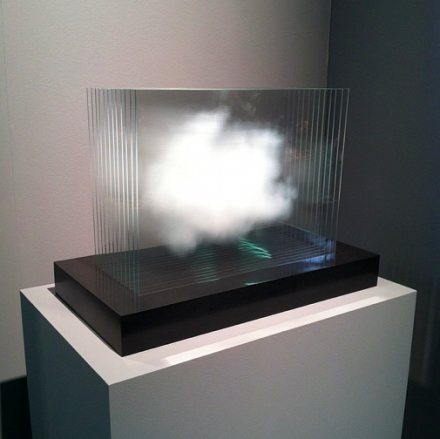 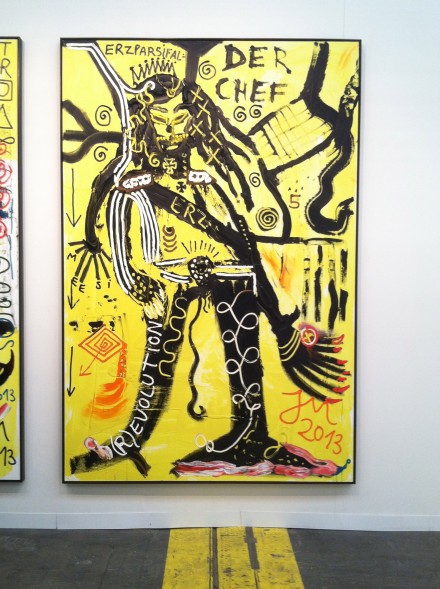 Jonathan Meese at Sies and Hoeke, via Art Observed 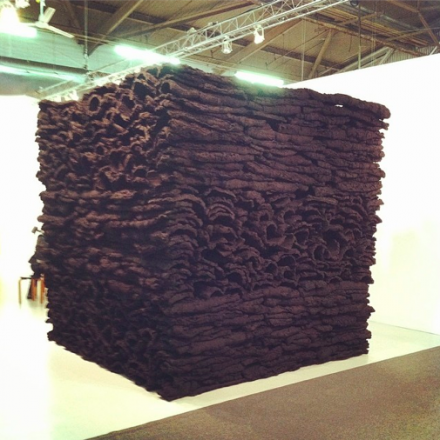 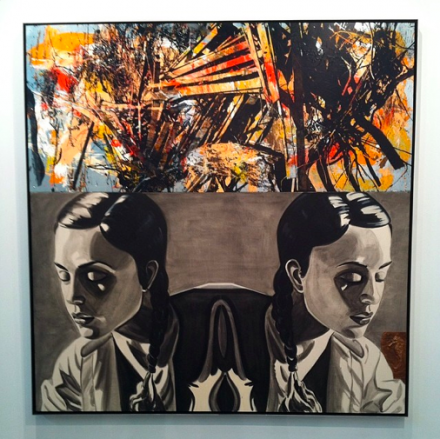 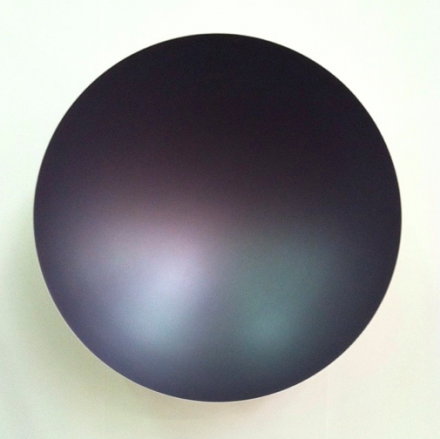 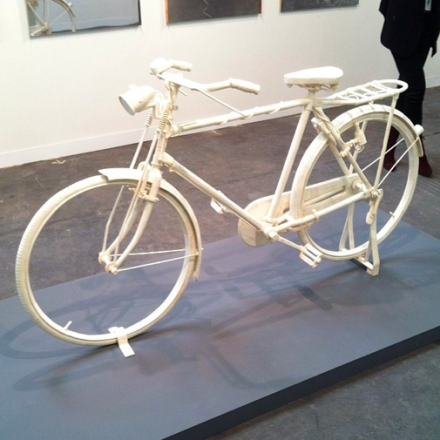 This entry was posted on Thursday, March 6th, 2014 at 3:56 pm and is filed under Art News. You can follow any responses to this entry through the RSS 2.0 feed. You can leave a response, or trackback from your own site.