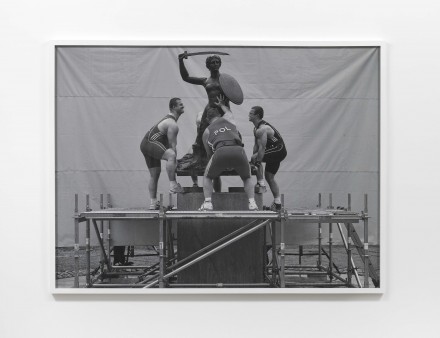 On view at Lisson Gallery in London is an installation composed of a 25-minute film and a series of photographs by German artist Christian Jankowski. Entitled “Heavy Weight History,” the images depict a group of Polish champion weightlifters trying to lift up public sculptures and memorials in Warsaw, Poland. 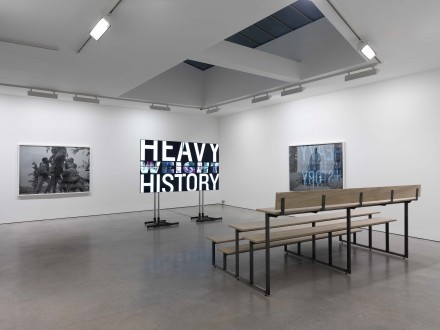 Born in 1968 in Göttingen, West Germany, Jankowski works primarily with video, installation, and photography, in a style often labeled as New Gothic Art. He is known for his collaborations with non artists, similar to documentary, mockumentary, or reality television. In the past, for example, he asked the cast and crew of a straight-to-DVD werewolf movie to reenact some of its most violent scenes, cut with theories of various film experts. In another work, he films an audition to cast an actor to play the role of Jesus, judged by a jury of Vatican members. In 2009, his installation Strip the Auctioneer combined video, sculpture, and a series of photographs of a live auction organized by Jankowski, taking place in a Christie’s auction house in Amsterdam, where the auctioneer’s clothing items are the objects being sold. 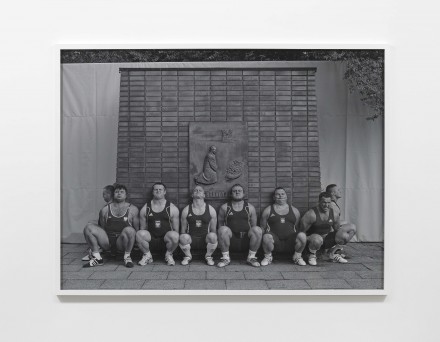 For the current exhibition, Jankowski traveled to Poland and asked several Polish champion powerlifters and bench pressers to attempt to lift several historical monuments and public sculptures made of bronze and brick, located around Warsaw – symbolically “lifting the burden of history” in an absurd and irrational, yet tangibly valiant way. Jankowski blends light-hearted comedy with controversial socio-political symbols, questioning the current relevance of these memorials as burdens sitting in the now-burgeoning city of Warsaw. 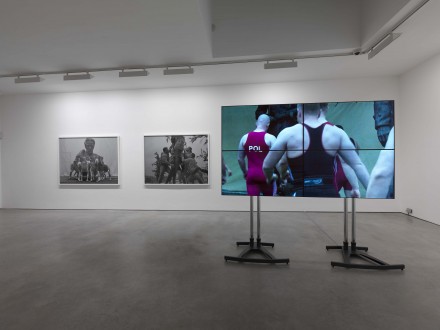 The work addresses the still painful memories of the Nazi occupation of Poland and the subsequent Soviet rule after World War II, questioning the relationships between the common people of Poland and the often-neglected monuments scattered around the city. The videos and photographs document his deeply-rooted, sensitive thematics, yet Jankowski chooses to document them in a style similar to reality TV, or a parody of a serious broadcast of competitive sports. He has even included a famous Polish commentator to describe the actions he records.

Jankowski’s installation Heavy Weight History will remain on view at Lisson Gallery in London through March 8, 2014. 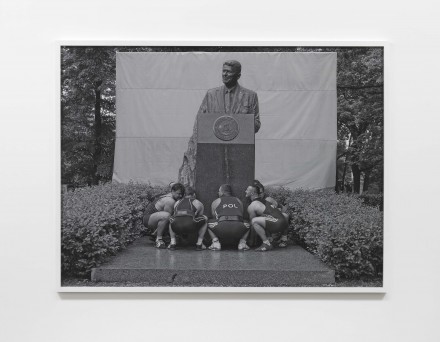 This entry was posted on Monday, March 3rd, 2014 at 3:13 pm and is filed under Art News. You can follow any responses to this entry through the RSS 2.0 feed. You can leave a response, or trackback from your own site.