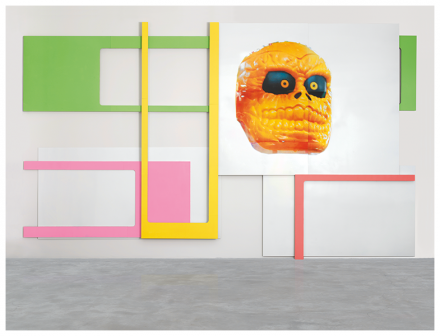 Spread over Matthew Marks Gallery’s spaces on 502, 522 and West 22nd Street is an exhibition of works by late Berlin-based artist Michael Majerus.  Presenting over twenty-five paintings and multimedia installations, the show is the most comprehensive of Majerus’s work in the United States as well as the first staged in the country since his life was cut short at the age of 35 by a plane crash in 2002.

The mixed media works on display reveal Majerus’s references and interest in popular culture and art history. Using abstract subject matter, they incorporate graphics taken from youth subcultures as well as the commercial mainstream, creating works with elements easily recognizable by an international public.  His emphasis on the visual vocabulary of next-generation technology and the 1990s consumer culture has led him to exemplify best what artist historian Daniel Birnbaum means when he said “painting in the expanded field.” The phrase pointed to the various and new social spaces of the Information Age – areas that are hard to capture visually, but which Majerus has successfully merged within his abstract canvases. 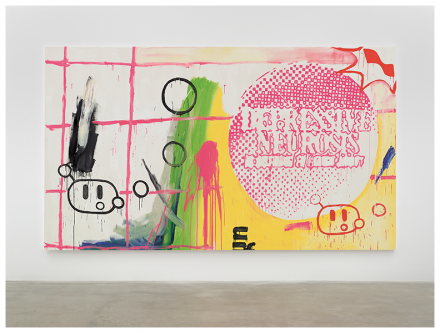 Fifteen of Majerus’s paintings made between 1994 and 2002 are on display at 522 West 22nd Street. They are large in size and comprise the vibrant colors found in both Minimalism and Pop with clear stylistic references to the work of Warhol and Basquiat, as well as other pop-culture elements.  Next door at 526 West 22nd Street is an installation made of thirty-six small square paintings made in a variety media. There are also larger paintings executed in enamel on aluminum that portray characters from the 1995 film Toy Story made in Majerus’s usual coupling of abstract expressionist painting techniques with cartoon-character like renderings. 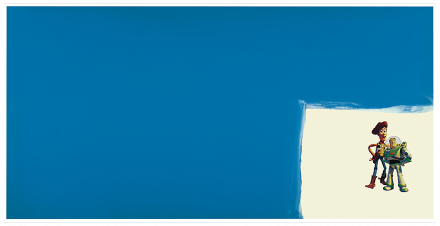 Nearby, Matthew Marks’ 502 West 22nd street space exhibits three examples from Majerus’s Tron series, which combine bright, monochromatic wall paintings with repeated silkscreens of the titular film’s advertising poster on canvas. The exhibition is also accompanied by a fully illustrated hardcover publication with a conversation between Birnbaum and the artist John Kelsey.

Uniquely spread over the three gallery spaces, this exhibition highlights Majerus’s constant dialogue with pivotal twentieth century artists and pop culture signifiers in turn, as well as moments when the two collide. Through the variety of mixed media canvases and installations we can see references to de Kooning’s whiplash brushstrokes, Basquiat’s graffiti-inspired canvases and Warhol’s obsession with pop culture. This is all done in Majerus’s distinct hand, incorporating the visual codes that so influence everyday life in an evolving Information Age. 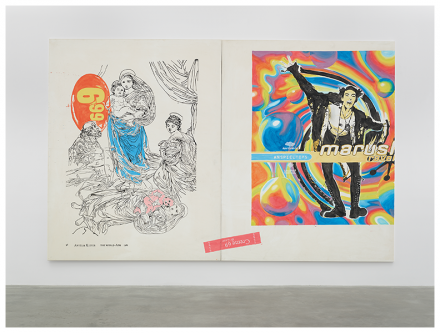 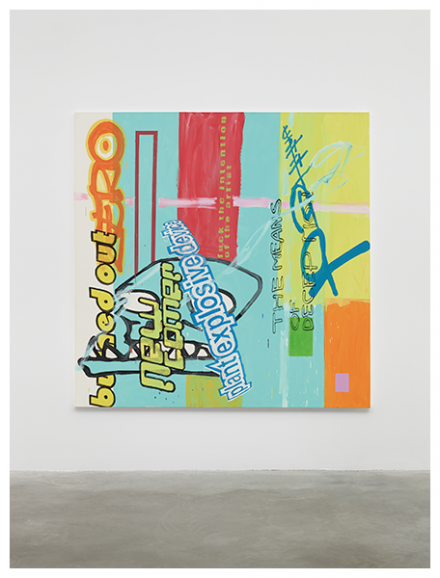 This entry was posted on Thursday, April 17th, 2014 at 12:00 am and is filed under Art News. You can follow any responses to this entry through the RSS 2.0 feed. You can leave a response, or trackback from your own site.