May 17th, 2022
REFERENCE LIBRARY
Home » London – Haim Steinbach: “once again the world is flat” at The Serpentine Gallery Through May 5th, 2014

London – Haim Steinbach: “once again the world is flat” at The Serpentine Gallery Through May 5th, 2014 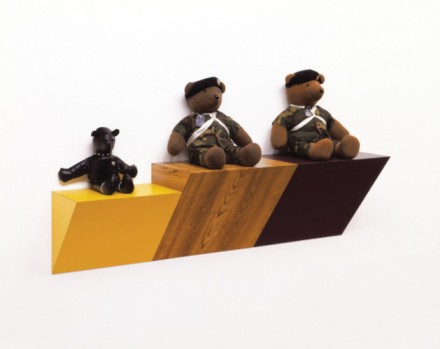 The Serpentine Gallery in London is currently presenting once again the world is flat., an exhibition celebrating Haim Steinbach’s forty-year career as a multimedia artist. Born in Israel and living in New York, Steinbach has presented a distinctive artistic practice by redefining what ‘collecting’ is, arranging familiar daily objects in his own methods while attributing further content and ground, allow the artist to invite viewers into extended readings on what is visible, but also on what lies beneath the surface of the work. 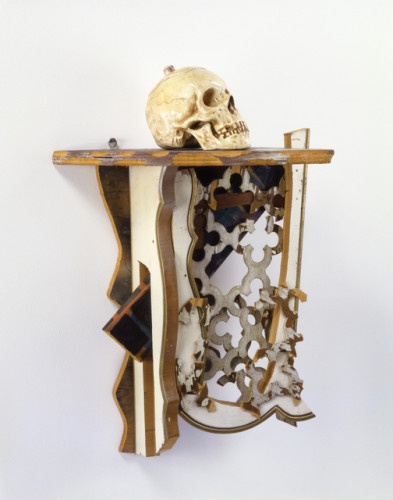 Steinbach who started his career as a painter in the 1970’s, transferred to a more conceptual and innovative practice in later years, combining the elements from architecture, design and sculpture in unexpected ways to present the familiar in an unfamiliar way. Steinbach comments on issues of commodification, collecting and memory by shifting the meanings of certain objects, while allowing their imageries to remain the same, and allowing them to perpetuate uncommon visuals. Through orchestrating objects from everyday life, the artist achieves subtle yet intriguing statements open to interpretation. 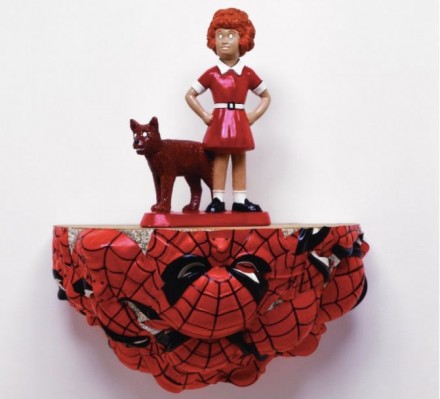 In basics (1986), Steinbach puts a teddy bear wearing a full body latex costume together with another two teddy bears in military outfits. In Shelf with Annie a porcelain Annie doll is posing on a shelf designed as Spiderman’s head. Shelf with Cookie Jar, on the other hand, is a skull shaped cookie jar put on a shelf made from wood and metal.  These arrangements carry mellow statements on consumption, media and post-industrialism, questioning the viewers’ set perceptions on various issues and subjects. While Steinbach’s decision to place these familiar objects on specific flat surfaces comes out as a reference to globalization and its infusion to daily lives, the exhibition title offers an intriguing and distinctively simple twist.  Allowing the art object to exist in full acknowledgement of its own role as a display, Steinbach’s work can at times feel like a return to a traditional subject-oriented practice, while still embracing conceptual critiques of exhibition, production and exchange. 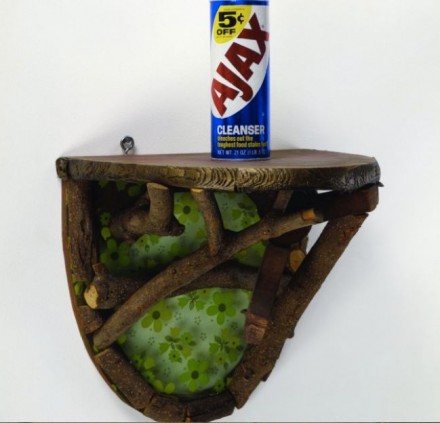 As a part of once again the world is flat Haim Steinbach has asked the public to contribute to the exhibition, bringing their own salt and pepper shakers to add to the exhibition. Accompanying to Steinbach’s own works, these salt and pepper shakers carry a diverse yet individualistic aspect; while each shaker carries the stories and the traces of its owner, it equally expresses the various elements of kitsch that Steinbach himself so readily embraces.  While the work is composed of the domestic material of countless visitors, Steinbach’s request and previous history as an artist makes the work appear distinctively his.  Building an uncommon collectivity through the use of domestic objects, this participatory idea asks questions on aesthetic, ownership and commodification.

Haim Steinbach: once again the world is flat is on view at Serpentine Galleries through May 5th, 2014. 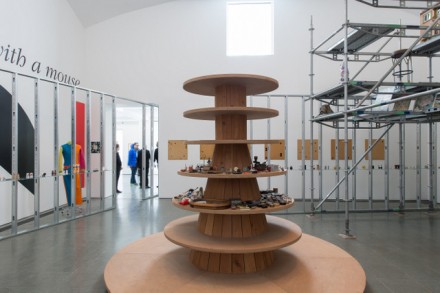 Haim Steinbach, once again the world is flat (Installation View)

This entry was posted on Tuesday, April 8th, 2014 at 12:00 am and is filed under Art News. You can follow any responses to this entry through the RSS 2.0 feed. You can leave a response, or trackback from your own site.