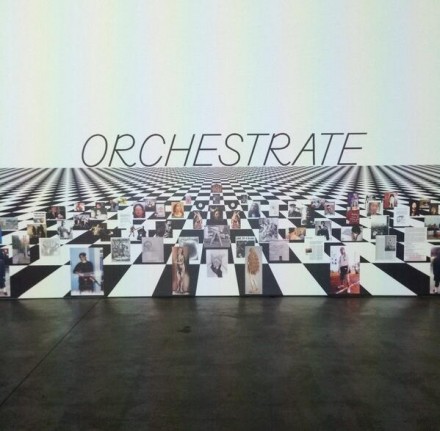 Currently on view at Gavin Brown’s Enterprise in New York is an exhibition featuring new work from Jennifer Bornstein, Judith Bernstein and Frances Stark.  While the work presented by each of these three artists is diverse in their concerns, they all possess a monumentality fitting to the large-scale environs of GBE. 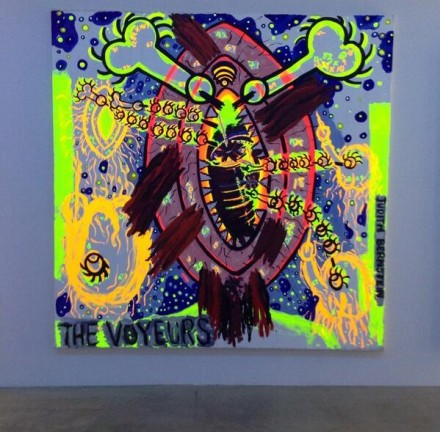 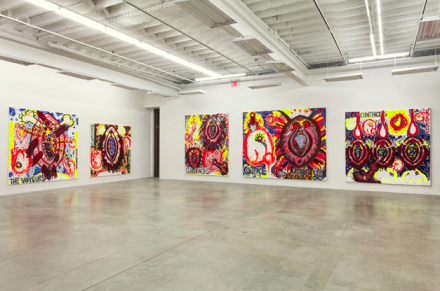 The works pulse with a chaotic sense of aggression, heightened by scrawled words that are repeated between the canvases—“CUNTFACE,” “COCKEYES,” “THE VOYEUR,” “INFINITY” and the artist’s own name. Like much of her work, there is a barely controlled, frenetic energy to them, and the primordial forms that they depict—as the title of the series would suggest—allude to the explosive energy of the universe. 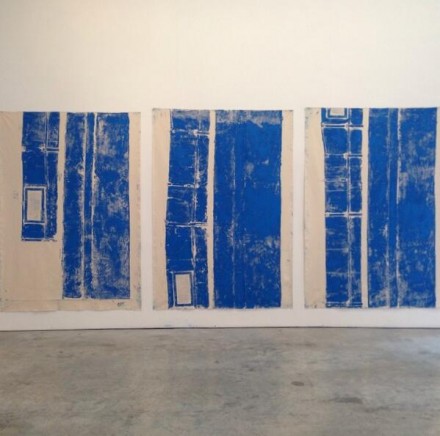 In another GBE’s expansive rooms, Jennifer Bornstein shows a new site-specific work. Applying oil-based printing inks to various surfaces in the gallery, she pulled images from them and onto canvases. She also jack-hammered a straight line into the gallery floor, the imprint of which is visible on the resulting monotype prints.  The piece offers a more stripped back approach to Bornstein’s previous explorations of architectural form. Where her work has in the past tended to incorporate an illustrative dimension—as in her 2007 exhibition of monotypes at GBE—what is instead evident here is a rigorous, one-to-one relationship between process and form. 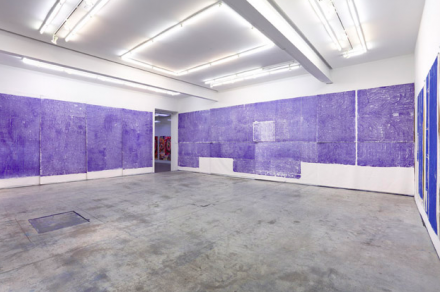 Finally, Frances Stark presents a video installation, Bobby Jesus’s Alma Mater b/w Reading the Book of David and/or Paying Attention Is Free, which was first debuted at the 2013 Carnegie International. The video is based around a text projection inspired by conversations with Bobby, a self-described resident of “planet ‘hood” who became the artist’s student, model, apprentice and guide. 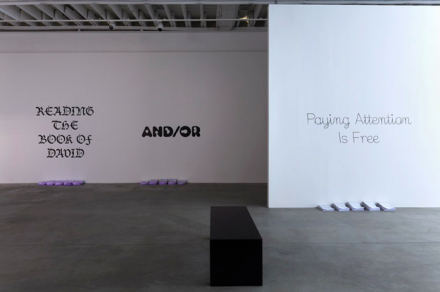 The work is accompanied by music from West coast rap pioneer DJ Quik, while Stark’s text and over 80 images are projected onto the screen, offering a cautionary tale about the dangers of mixing art with money. Additionally, the installation is accompanied by a new booklet, Trapped in the VIP (2014), as well as five take-away posters, which serve as visual indexes for parts of the video presentation. Detailing a $70 million gift to the University of Southern California by Dr. Dre, the work poses a provocative series of questions at the complex intersections of racial politics, money and black empowerment in the United States.

The exhibition has been extended through May 2nd. 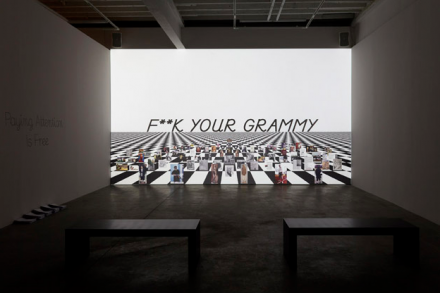 This entry was posted on Thursday, May 1st, 2014 at 12:00 am and is filed under Art News. You can follow any responses to this entry through the RSS 2.0 feed. You can leave a response, or trackback from your own site.