New York – Nate Lowman: “Rave the Painforest” at Maccarone Gallery Through May 10th, 2014 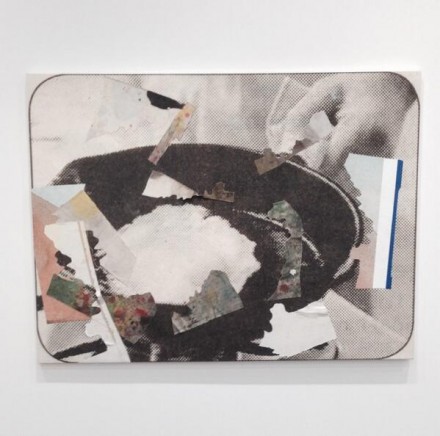 Nate Lowman, This Is Your Brain On Drugs Again, via Art Observed

Nate Lowman’s current solo show is notable in its subtlety.  Once a maker of enormous reproductions of vinyl, consumer-grade bullet hole decals and canvases covered with smiley-faces, Lowman’s new work currently on view at Maccarone Gallery takes a different tack entirely.  Lightly painted, cut canvases and pixelated cut-outs dot the works, rendering soft, pastel forms that mark a notable break from the often harsh images of urban decay he so often selected as the subject of his past practice. 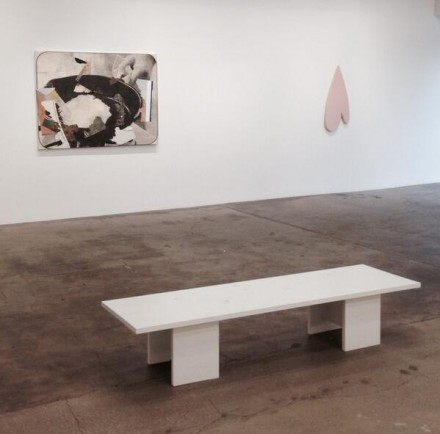 Not to say there isn’t a notable thread running through the pieces here.  Something about their depiction and creation remains distinctly in the vein of Lowman’s often irreverent skewering’s of pop iconography, but a newly subdued, more nuanced approach takes the foreground here.  Lowman’s cut works add a tangible slacker lilt to the shaped surfaces of Ellsworth Kelly: soft, sketchy palm trees and drooping hearts in the place of Kelly’s precise lines and careful forms, a sort of downtown pastoralism that sits somewhere between natural imagery and witty appropriation of the art historical.  In one piece, Lowman meticulously recreates the state of Wisconsin in similar fashion, letting its hard edges play off against the abstract forms of the works surrounding them.  In another, he abstracts the leaf from the Apple logo, letting it stand on its own as an element of design more in tune with its natural analog than its slick corporate origins. 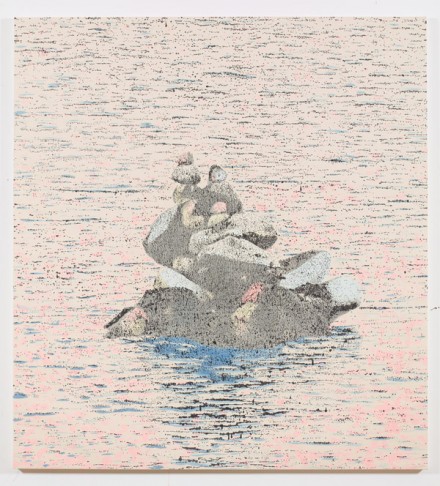 Alongside his cut canvas works, Lowman is showing a pair of of painted canvases, utilizing a blurred, pointillist style that holds the viewer at a distance, trying to make sense of the subject through a haze of black dots and stained  canvases, or, in another work, torn shreds of paint-spotted dropcloth, working over the surface of the work in a seemingly lackadaisical style that plays at legibility.  Lowman seems to hover between earnest painting and stylistic decomposition, and due to the lack of a real narrative to the works, allows ambiguity to take a prominent place in the final presentation. 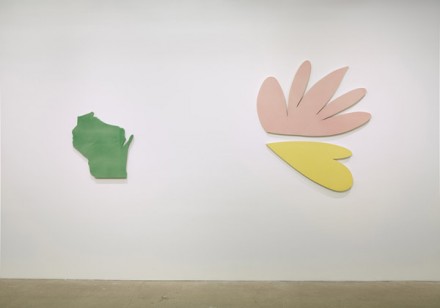 The show has drawn considerable attention as an earnest attempt at reinvention for Lowman, who has stayed out of the spotlight to a certain degree as of late.  Turning his particular blend of wit and style to a more mellow, languid milieu, Rave the Painforest is an interesting entry in the artist’s progression.  The show is on view through May 10th. 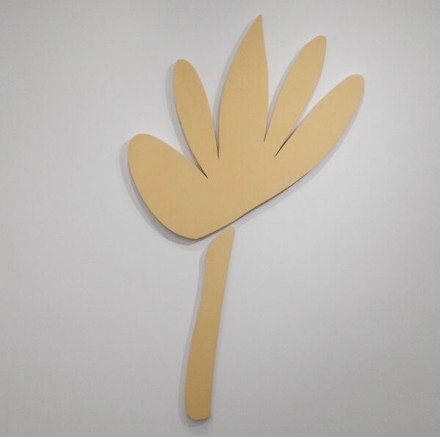 This entry was posted on Saturday, May 10th, 2014 at 11:27 am and is filed under Art News. You can follow any responses to this entry through the RSS 2.0 feed. You can leave a response, or trackback from your own site.