Daniel Loeb Stands Behind Sotheby’s Management After Taking Board Seat 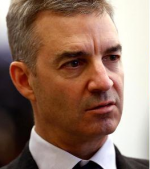 Following the harsh dispute between investor Daniel Loeb and Sotheby’s, the election of Loeb’s team seems to have signaled a truce between his Third Point company and the embattled auction house.  Loeb and his fellow newly elected board members have announced that they stand behind current management at Sotheby’s, particularly CEO William Ruprecht, whose removal Loeb had called for several times earlier this year.  “As of today we see ourselves not as the Third Point nominees but as Sotheby’s directors, and we expect to work collaboratively with our fellow board members to enhance long-term value on behalf of all shareholders,” Loeb said in a statement.Read more at Deal Book

This entry was posted on Friday, June 13th, 2014 at 4:28 pm and is filed under Art News. You can follow any responses to this entry through the RSS 2.0 feed. You can leave a response, or trackback from your own site.