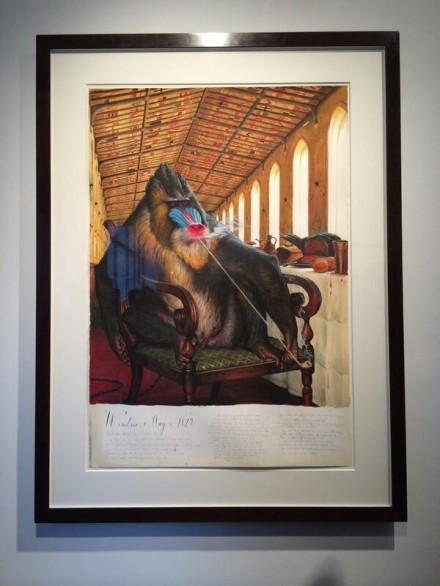 On view at Paul Kasmin Gallery in New York is a series of watercolors by Walton Ford, exploring the iconography of traditional natural history painting, while focusing on encounters between human culture and the natural world, and featuring for the first time words written in the margins from Ford’s imagined perspective of the animal subjects. 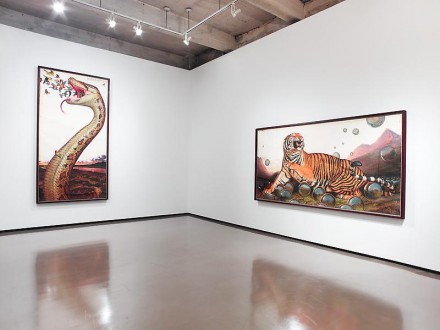 Ford has previously explored natural history in his works, drawing on literary sources, folklore, and historical anecdotes for his monumental works. His Rhyndacus (2014), included in the current exhibition at Paul Kasmin Gallery, is a 10 foot tall portrait of an allegedly sixty-foot serpent inhabiting Phrygia in present day Turkey. The work was inspired by an account n Aelian’s De Natura Animalium, in which the serpent is said to magically lure prey into its open mouth. The work is a detailed, thoroughly researched work representing the Ancient Roman vision of the east, featuring native Turkish flora and fauna along with the legendary creature, sucking in a flock of colorful birds. 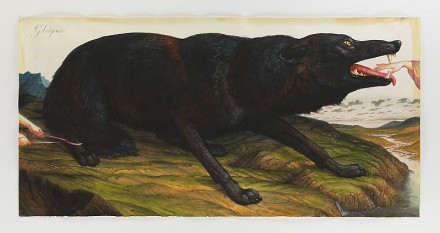 The Graf Zeppelin (2014) tells the story of Susie, the first female gorilla brought to the United States. She was brought in a first class cabin of the German airship in 1929. The work includes a written account of her observations and state of mind, as imagined by the artist, blending a bizarre animal perspective with classic still-life and portraiture tropes to create a surreally timeless environment.  Similarly, Windsor, May 1829 (2014) depicts “Happy Jerry,” a mandrill who lived in Edward Cross’s menagerie in London during the early 1800s. The image Ford has painted comes from a description by Adam White in his 1870 book Heads and Tales, depicting an image of Happy Jerry siting at a table, drinking port, smoking a clay pipe and eating a meal with King George IV. This work also includes Ford’s written perspective of Happy Jerry’s feeling. 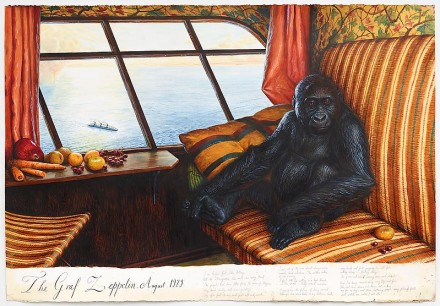 The tongue-in-cheek nature of Ford’s massive and intricate watercolor works is hard to miss, blending the conventions of 19th century portraiture with a distinctly 21st century sense of deconstruction.  Humans are removed from the equation, but the forces they impose on the beasts at hand are hard to ignore, a dictation of the animal’s role through human dialect.  While the ape remains an ape, its definition of self through the human tongue removes it from its natural environs, leaving it stuck in the realm of man.

Chronicling imagined and real encouters between the human and natural environments, Ford’s work will remain on view through June 21st, 2014. 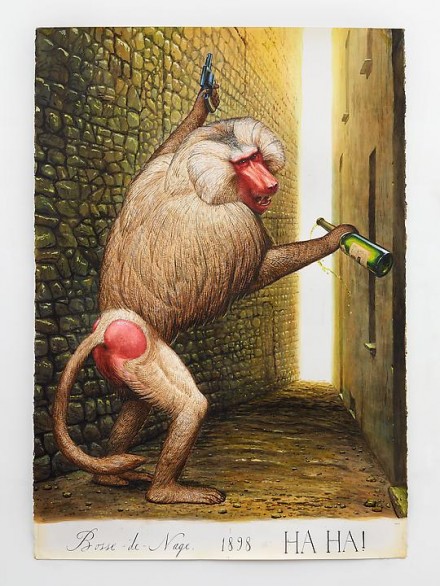 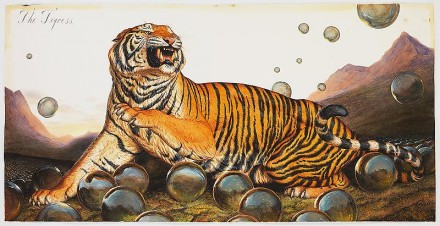 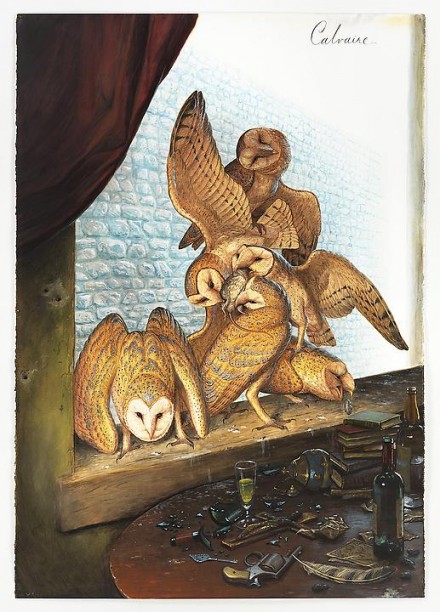 This entry was posted on Thursday, June 19th, 2014 at 12:00 am and is filed under Art News. You can follow any responses to this entry through the RSS 2.0 feed. You can leave a response, or trackback from your own site.