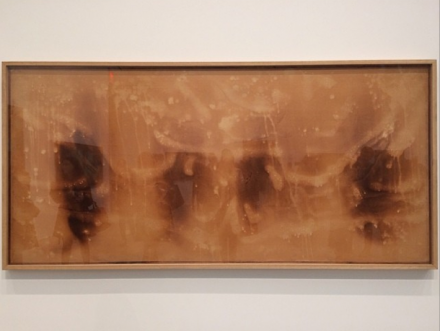 Skarstedt Gallery has joined the crowd in Chelsea this month, opening its  new W. 21st Street space with a selection of unorthodox paintings by Yves Klein and Andy Warhol, created using human urine, oxidized metallic paints, water and fire.  Spread among the high-ceilinged rooms of the new space, the show welcomes an intuitive look into the pair’s interests not only in non-art materials and processes, but particularly those closest to the human condition. 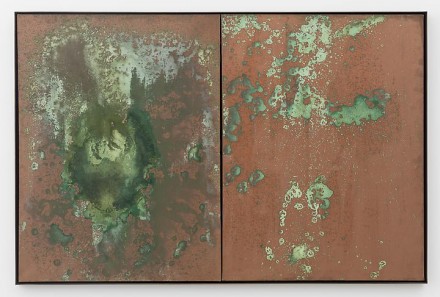 Andy Warhol, Oxidation Painting (diptych) (1978), via SkarstedtThe exhibition, if perhaps a bit overloaded with works, is a welcoming introduction to both Warhol and Klein’s interests and processes in the creation of the works.  Klein’s works were the result of access to a destructive testing lab, where the artist used an immense flamethrower and cooling agents to burn immense, shaded marks across the surface of the treated paper.  The result is a remarkable attempt at capturing the flame, a core element of human civilization, as the artist deems it, on paper.  Similarly, Warhol’s work comes about through a similar repeated process.  Painting canvases with a shimmering copper pigment, the artist then asked various guests, studio assistants and visitors to urinate over the canvases, allowing the process of oxidation to render the full motion of the act, an abject practice turned back towards the high-minded creative act. 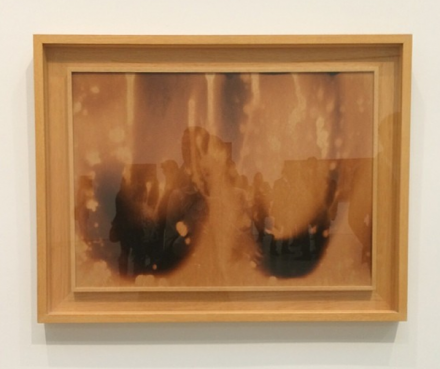 Essential to both series of works is a sense of the mechanical, of the quickly executed nature of the pieces in conjunction with a grain of creative expression.  Rather than fully control the painter’s form and color, both artists are content to leave the mechanical (both human and technologic) as a major determining force in the work. This mode of practice welcomes a certain flair for the application of the “materials,” while never forgetting the natural forces complicit in the final outcome. 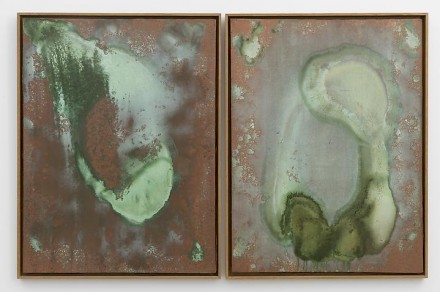 At the same time, this final result bears a remarkable sense of the humanity involved in its creation.  The sputters and drips of Warhol’s works and the gentle curvature of Klein’s ultimately express a unity of man and material, of essential life processes that sit at the core of human behavior in various configurations.  Klein’s work comes remarkably close to some of the best artistic attempts at rendering the phenomenon of flame, and Warhol’s is a striking study of the pooling and splatter of liquids in motion, definitively human iconography that is captured all the more faithfully by artist procedures of recording and documentation: somewhere between painterly expression and abstract photography.

Cataloguing a unique body of work by both artists, Fire and Oxidation Paintings is on view through June 21. 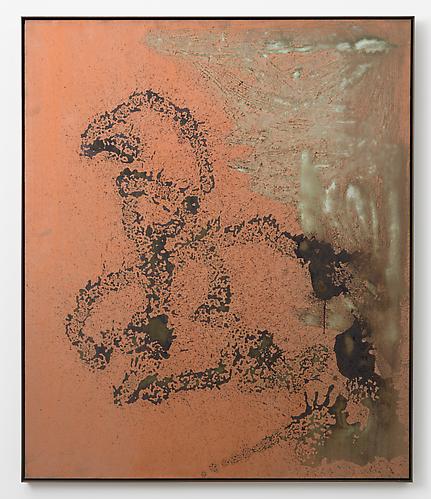 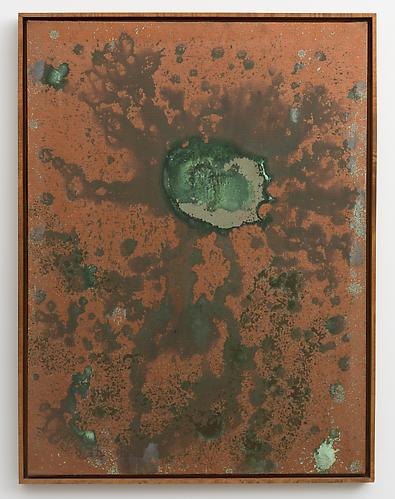 This entry was posted on Friday, June 13th, 2014 at 12:00 am and is filed under Art News. You can follow any responses to this entry through the RSS 2.0 feed. You can leave a response, or trackback from your own site.