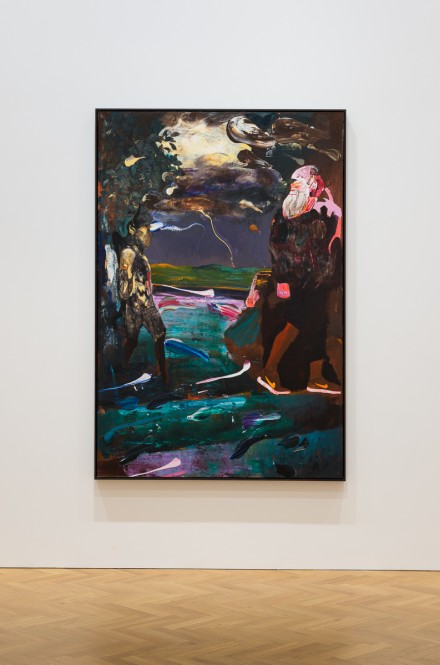 Tempestuous, chaotic and captivating are only a few of the many attributions to describe the delirious colors and harmonics of Adrian Ghenie. Born and raised in Romania, the thirty-seven year old artist often experiments with the set techniques of painting through extensions and variations of narrative, conveying eerie tales of decay and disarray throughout his works. On view at Pace Gallery in London until July 25th is Ghenie’s most recent body of work, featuring nine oil on linen paintings and a large-scale room installation, reflecting the artist’s approach to the roots of Western ideology and the impact of intellectual thinking. 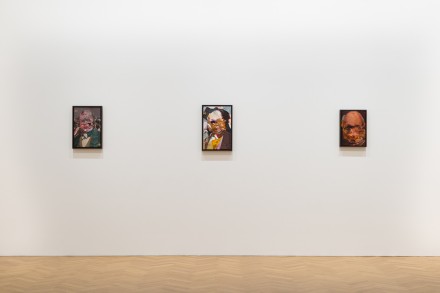 Ghenie, who delivered an impressive selection of works investigating the dynamics of power structures and the ethics in European history last year at Pace’s New York location, is continuing his study on the basis of Western thought, relying heavily on the accidental assembly of the paint and the surface of the work.  “Staged accidents,” as the artist calls them, meaning the drips and splashes applied to the surface, result in dominantly potent paintings, transferring the notions of chaos and exuberance. Distorted or blurred faces and bodies blend into particularly uncanny environments, standing out as the reflections of the complexities and dilemmas of the human condition. 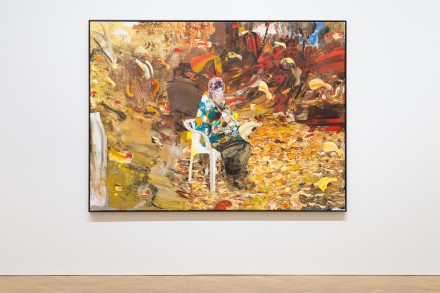 Adrian Ghenie, Charles Darwin at the age of 75 (2014) ©Adrian Ghenie Courtesy of The Pace Gallery

The exhibition Golems, referring to malicious creatures believed to be the bearers of the evil in Jewish mythology, deepens Ghenie’s investigation of the political, social and intellectual consciousness that influenced the foundations of European society, using the subject creatures as a metaphor for the contemporary society’s submission to arrogance and superficiality. Acknowledging Darwin and his legacy on modern thinking as an influence, Ghenie seeks the conditions that unorthodox and revolutionary assertions achieved to be vocalized throughout the evolution of Western identity. 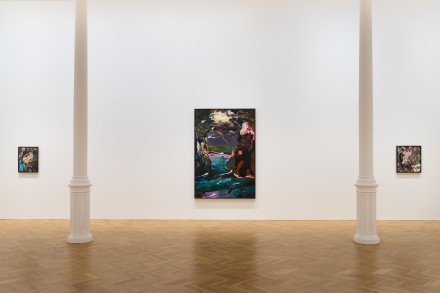 Charles Darwin at the age of 40 and two paintings both titled as Charles Darwin as a young man blur the limitations of figurativeness and representation, surfacing the subliminal state of scientific thinking Darwin represents with a dynamic arrangement of crisp colors. A pair of paintings both titled as Self Portrait as Charles Darwin aim to humanize the iconic yet reclusive status of the British geologist through materializing his existence and cognizing his identity, while using a strongly abstracted painting manner. Darwin and The Satyr, on the other hand, depicts a vaguely visible modern man wearing Nike sneakers alongside a Satyr from the Greek mythology, making an ironic reference to Darwin’s theory of evolution, and bringing his modern day persona in close encounter with an unworldly half-animal and half-human creature. 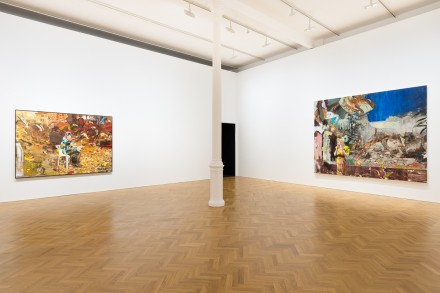 The Darwin Room, an environmental installation dimly lit by the means of an internal window, invites the viewers into a room built with earth-toned, nineteenth century construction materials and some contemporary accents such as a plastic chair.  Alienated from the sterilized gallery environment, the room suggests a step into the mind of Darwin, with its eerie and intimate display, showcasing a gaze into scientific advancements and profundity.

Adrian Ghenie: Golems is on view at Pace Gallery through July 26, 2014.

This entry was posted on Friday, July 18th, 2014 at 12:00 am and is filed under Art News. You can follow any responses to this entry through the RSS 2.0 feed. You can leave a response, or trackback from your own site.