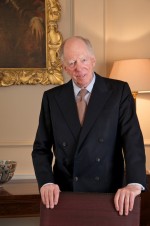 Lord Jacob Rothschild has been awarded with the J. Paul Getty Award for his contributions to British arts and culture.  Rothschild has long been a supporter of the arts, and has served as a board chair at the National Gallery in London, the National Heritage Memorial Fund and the Heritage Lottery Fund.  “No one embodies the ideals of the Getty medal more than Lord Rothschild,” Cuno said in a statement, adding that “he is without question the most influential volunteer cultural leader in the English-speaking world.” Says Getty President and CEO James Cuno.Read more at Art Newspaper

This entry was posted on Monday, July 28th, 2014 at 8:17 pm and is filed under Art News. You can follow any responses to this entry through the RSS 2.0 feed. You can leave a response, or trackback from your own site.