New York — “Jeff Koons: A Retrospective” at The Whitney Museum of Art Through October 19th, 2014 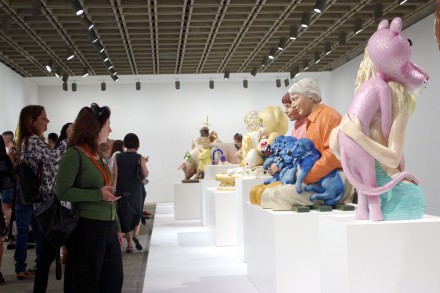 Official opening of ‘Jeff Koons: A Retrospective’ at The Whitney Museum of American Art, Images via Kelly Lee for Art Observed

After months of hushed tones and starstruck reports on the scale, cost and ambition of Jeff Koons’s career retrospective at The Whitney, the doors have opened at the museum for its last exhibition before the long-held 75th and Madison building is abandoned for its new Meatpacking District headquarters.  As indicated, the show has indeed pulled out the stops for Koons, with a combination of new works and classic pieces. 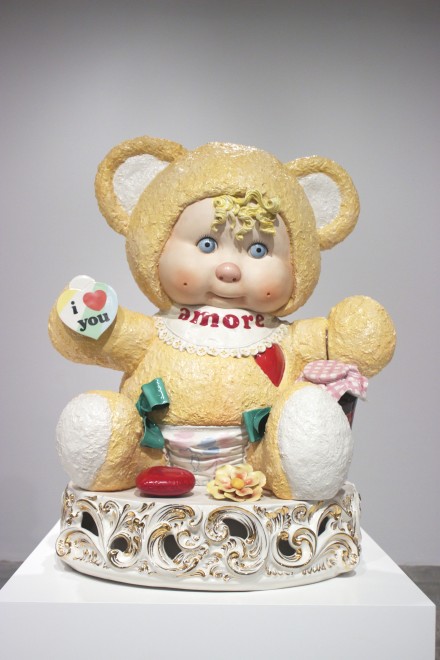 It’s been a long time coming for Koons, who has found himself among the highest ranks of the art world’s current market explosion, and who currently stands as one of the art world’s most expensive artists, but who also has seen institutional and critical approval avoid him for years, particularly when it come to his factory-style production methods and criticisms of pointless, surface-level art meant as big-ticket trophies for billionaire collectors.  But with his show at the Whitney, he seems to have finally found space for his own narrative, and the four floor exhibition provides him with a strong platform to finally speak on his own terms, several steps removed from the market’s harsh glare.

The opportunity isn’t lost on the artist, nor on curator Scott Rothkopf, who pushes for a nearly linear exploration of Koons’s work, with the occasional intersection of bodies of work from various eras to speak for Koons’s often divisive works.  Beginning one floor up with his early series The New, as well as a group of his early readymade sculptures (inflatable bunnies, palm trees and sponges arranged against faux-marble printed mirrors), Koons’s work is allowed to evolve and shift, moving through his landmark show Equilibrium, his controversial Made in Heaven, and onwards through his work in the Statuary, Pop-Eye, and Gazing Ball Series, among others. 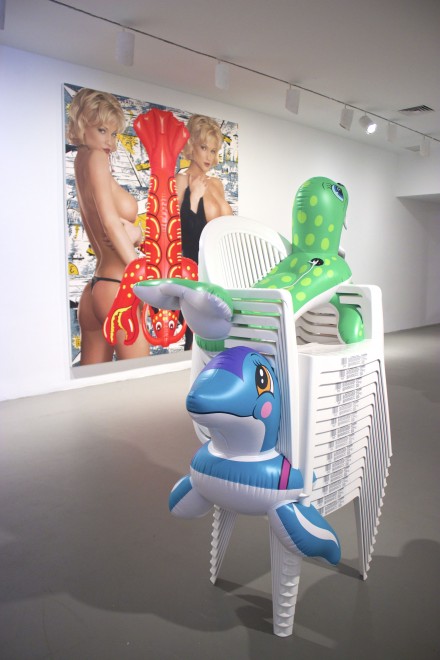 But perhaps the best benefit of the show is the illumination of much of Koons’s occasionally ham-fisted rhetoric. An artist who peppers descriptions of his work with concepts of “salvation,” and “the sacred,” Koons’s work here gets the  perspective to actually unfold his meanings, ultimately wrapped more along classic, occasionally ancient humanist signifiers (the Greco-Roman pantheon, fertility icons, childish tropes).   Koons’s poses and iconography always seems locked between historical awareness and inherent newness, a space that welcomes an open-ended engagement with the body of art in exchange with the body as an image. 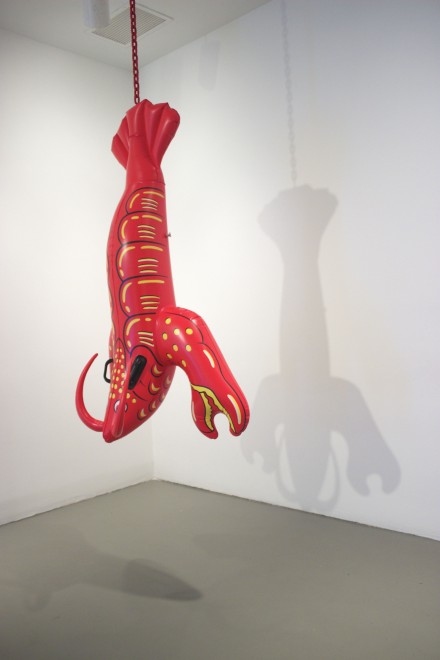 His readymade Nike posters from Equilibrium, for example, feel even more radical as time passes, not less, particularly given the endless permutations of cultural appropriation young artists have culled from his particular approach.  Koons’s gaze falls on both the figures and the poster as subjects, a dual turn that allows the act of image creation to function alongside the image itself, and to engage with the poses depicted, as well as their historical signifiers, in a complex assemblage.   Rather than abruptly alter or manipulate the images, Koons allows them their own agency, locked into conversation with his own bronzed life raft and snorkel.  Negotiating the two are his floating basketballs, eerily stuck in the center of his tanks, and all signed with his own initials in a winking tribute to NBA lore: “D. J.K.” 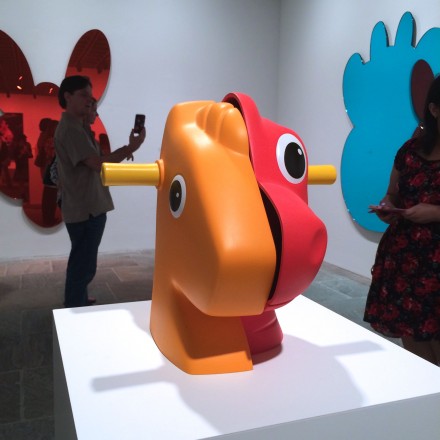 Throughout, this approach to un-mooring his subject matter takes on a vast range of outputs, but ultimately, the goal is the same: a testing ground where the absence of an animating, human presence fundamentally alters the work, and leaves an unsettling husk, subject to close inspection in the museum’s almost clinical white cube.  Gesture and material mark an exchange with the past and present: classic sculptures in stainless steel, liquor ads teeming with overt sexualization, and children’s toys hung in a manipulated schizophrenia that calls up the hyper-masculine imagery of both comic book heroes and the child’s fragile, developing imagination in countless variations throughout. 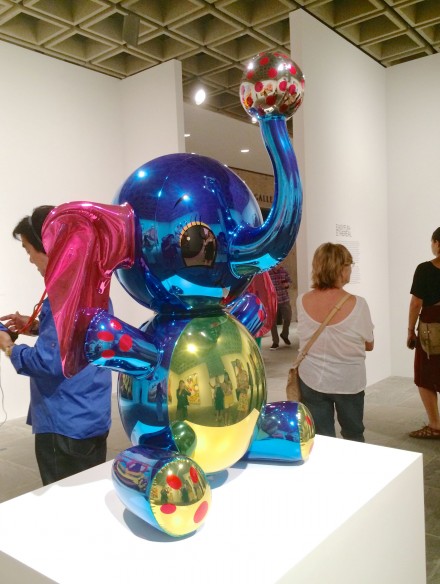 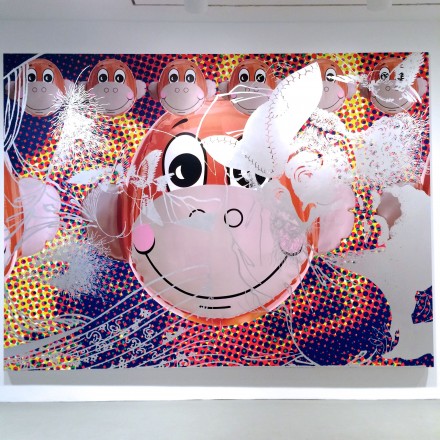 The exhibition continues through Koons’s more recent work, including his Banality series, through to his most recent sculptures, including a dauntingly colorful stack of Play-dough, bearing swells of color and cracked corners rendered in steel.  The work, one of the largest works the Whitney has ever installed in the museum, makes much of the artist’s longstanding embrace of materiality, shifting from jagged edges to smooth, soft planes of bright red and yellow.  It’s impressive in its mass, but also in its occasional formlessness, moving between cunning figuration and a nearly shapeless mass.  Each time, the work pulls in some sort of exterior meaning, warped by the bland presentation of the piece, or its sheer magnitude alone.  While critics have launched countless mixed reviews of the exhibition, the show offers a strong ground for understanding Koons as a whole, from his early explorations through to his immense, record-breaking works of recent history.  Taken together, the two halves paint a powerful and nuanced whole, much like his basketballs suspended in liquid.

The Koons retrospective will remain open through October 19th. 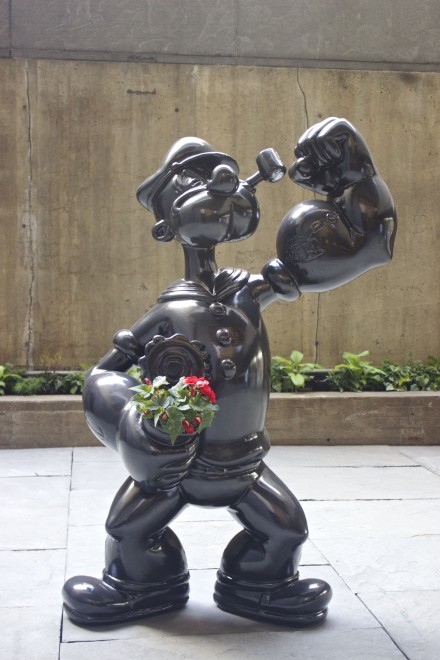 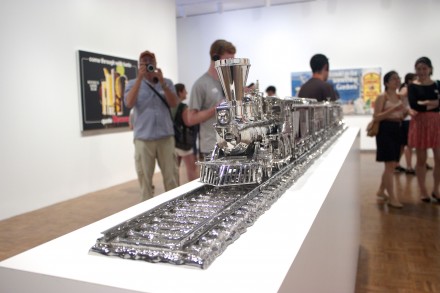 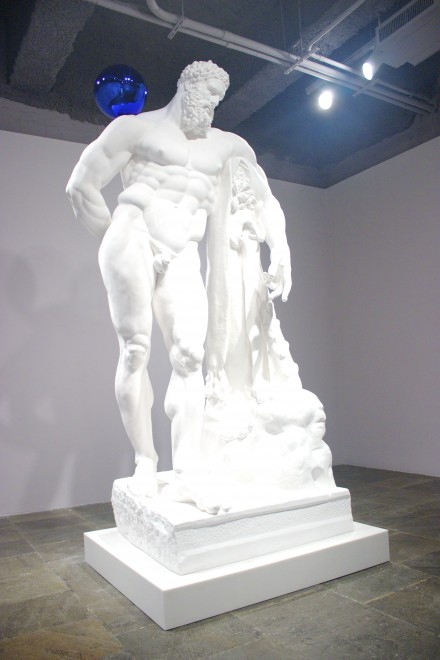 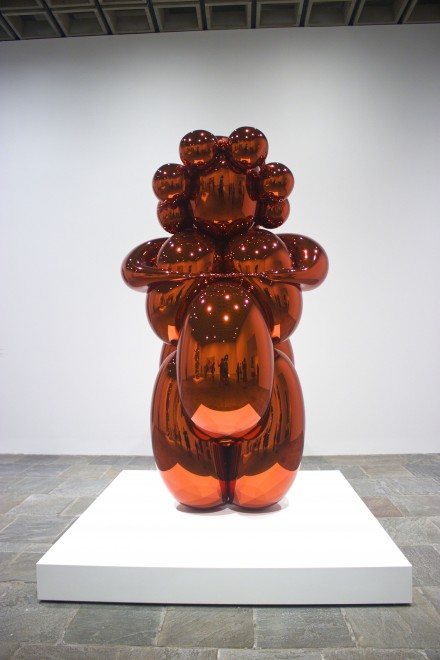 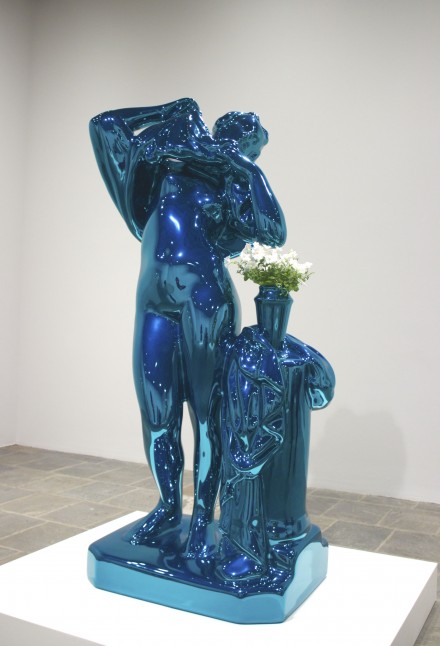 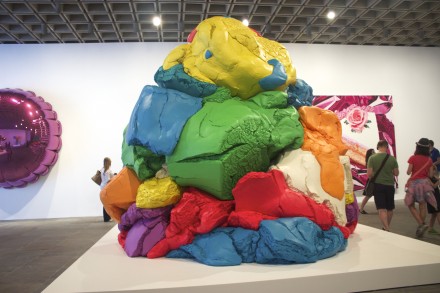 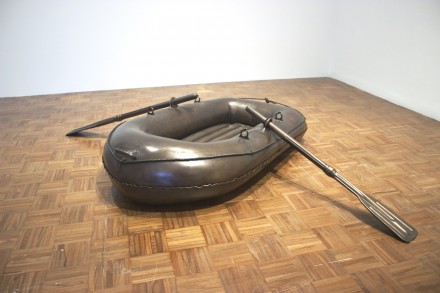 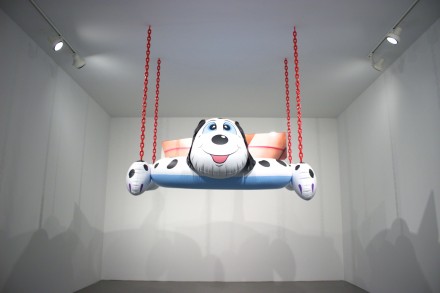 This entry was posted on Friday, July 4th, 2014 at 12:00 am and is filed under Art News. You can follow any responses to this entry through the RSS 2.0 feed. You can leave a response, or trackback from your own site.

One Response to “New York — “Jeff Koons: A Retrospective” at The Whitney Museum of Art Through October 19th, 2014”