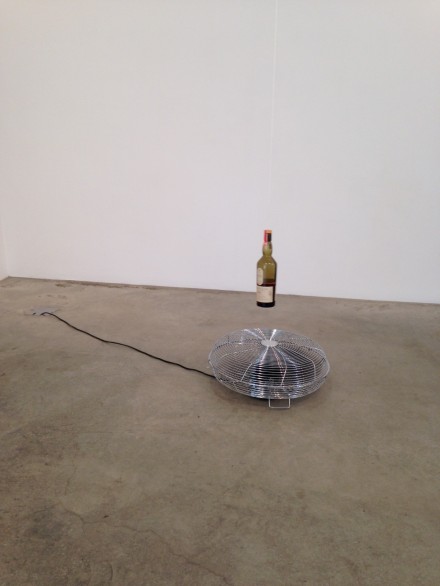 The summer season means a few things for the art world: beach installations, special projects in the Hamptons, and of course, group shows. During the hot summer months many galleries are presenting selections of works by different artists through various thematic ideas, giving gallery goers the opportunity to discover new readings between different artists’ works.  Among these galleries is Koenig & Clinton, hosting Fixing a Hole, a group exhibition investigating the notion of “fixing” in both meanings: mending what is broken and securing what is unstable. The tightly-curated selection focuses on a niche concept, making the occasionally challenging group show tradition an appealing one. Works in various mediums articulate the instincts of correction and stabilization of a dysfunctional case, arguing for the sensation of readjustment. 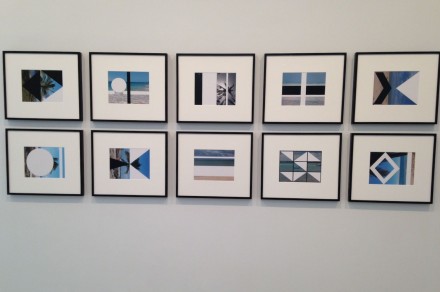 Bringing together major names like Vito Acconci and Nancy Holt with some new favorites such as Daniel Turner and A.K. Burns, the choice of works suggests alternative and unexpected correlations between practically unconnected artists. Carrying an autumn breeze into the gallery is Roman Signer’s Flasche (Bottle), combined of a working fan and a whiskey bottle hanging from the ceiling, creating an imaginary circle by constantly spinning with the circular air flows of the fan. 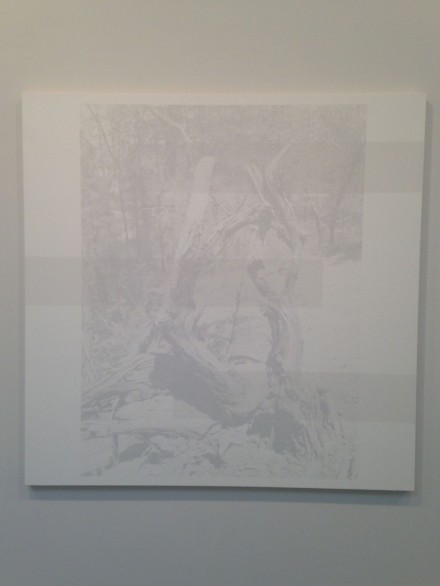 Given the fact that the exhibition is titled as Fixing a Hole, there is a constant reference to the notion of void and the consequent absence it represents. Daniel Turner’s worn-out PVC case, and the unfamiliar material inside comments on the attempt of protecting what’s in peril. The state of absence also stands out as the central theme in The Missing Note series, Paul Ramírez Jonas’ presentation of a musical score of a protest song, after certain notes are covered using brushstrokes to change the tune, and Seascape, Alexandre da Cunha’s photographs of landscapes with certain parts cut out to make the images that resemble certain nations’ flags. 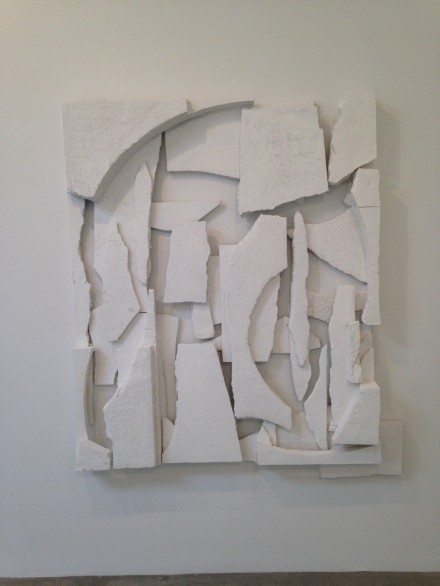 The phenomena of stabilization is embodied in various works, including A.K. Burns’ three piece arrangement of collages hung on the wall using pennies, commenting on consumerism and commodification, Maseraine, Cameron Martin’s mediative re-toned imagery of a slow paced nature and Carolyn Salas’ wall relief of painted resin suggesting an ambiguously foreign formation titled The Breakups #1. Striking a humorous accent among the display of the works, Tag um Tag guter Tag Nr. 0 (Day), Peter Dreher’s painting of a half empty water glass is still present on the wall from the gallery’s previous exhibition, connecting with both aspects of the current show: an empty glass waiting to be filled while secured resolutely to the wall. 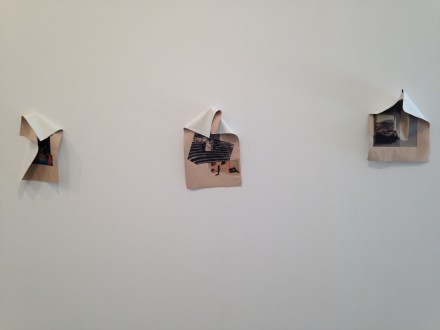 A view from A.K. Burns’ series of collages

*All images are by Osman Can Yerebakan for Art Observed

This entry was posted on Sunday, July 20th, 2014 at 12:00 am and is filed under AO On Site. You can follow any responses to this entry through the RSS 2.0 feed. You can leave a response, or trackback from your own site.