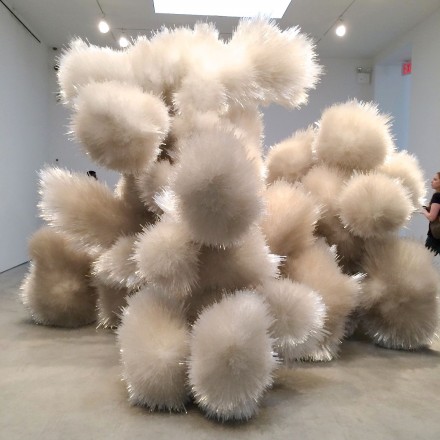 The geometric, visually imaginative work of Tara Donovan takes its inspiration from simple movements, simple gestures elevated by their repetition and internal harmony.  Her work finds its form through the interaction of its elements, the spatial and compositional considerations of her materials, placed in close proximity and allowed to engage in a conversation between each singular element and the final form these pieces ultimately create. 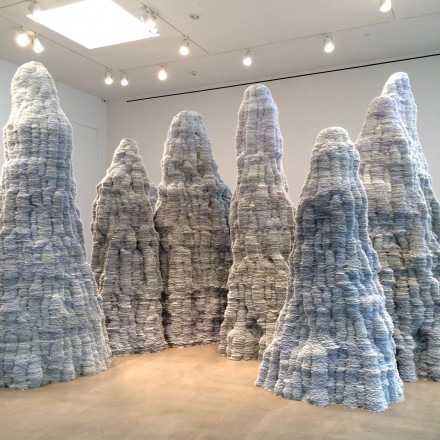 It’s just this internal dialogue that sits at the center of a pair of Donovan’s sculptures, currently on view at Pace Gallery’s West 25th Street Space.  Each work utilizes a single material, and explores the constant variation and interaction of pieces as Donovan stacks and conjoins, allowing the form to take precedence.  In one room, Donovan has utilized simple index cards, constantly shifting and turning them as the stacks grow ever taller, forming massive stalagmites that give the illusion of gentle, curving slopes from a distance.  The sharp edges of the cards are left virtually untouched, and are instead used to create variations in depth and form, nuances that spring almost unheeded from the buildup of materials that Donovan pushes to its limit. 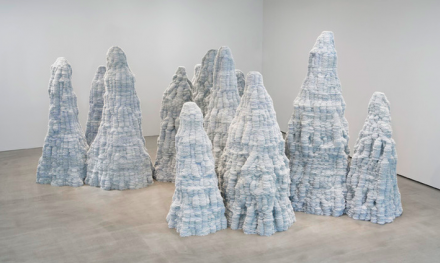 In the next room, Donovan turns to acrylic rods to attempt a similar formal exploration, with markedly different results. Focusing in on singular points of convergence, the artist’s sculpture becomes a cloud-like group of clusters, bending light reflections to create a deceptive, almost fluffy texture to the piece.  Donovan’s piece seems to explore with life, stuck in a moment of rapid entropy that calls to mind both mathematical formulae and natural phenomena in equal measure.  In contrast with the towering columns of the other room, Donovan’s work here becomes more crystalline with close examination, as if composed from a substance stuck between perfectly straight, natural elements and an almost industrial sense of construction. 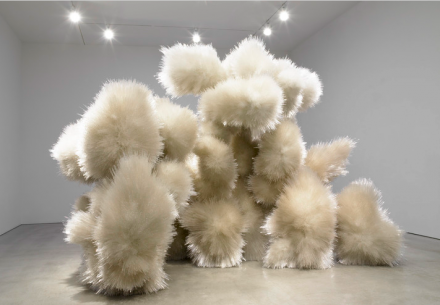 This note seems to sit at the center of Donovan’s artistic approach.  Engaging more with an intersection of materialist concerns and spatial relations, Donovan’s work is as much about individual aesthetic points as the result of their convergence.  Almost fractal in their elemental consideration of space and their illusory final shapes, Donovan’s work here embraces the simple process of accumulation, and the transformation of space and form through these processes.  Rather than seek to recreate through her materials, Donovan is content to let her pieces expand on their own terms, and to allow the work to spring forth from the art object itself.

The pair of sculptures is on view in New York through August 15th. 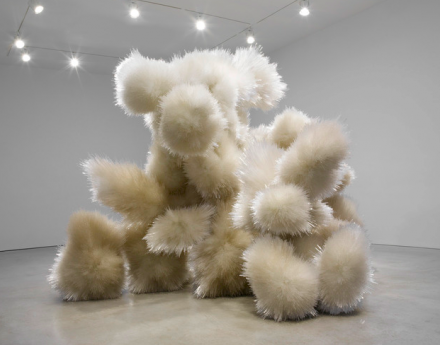 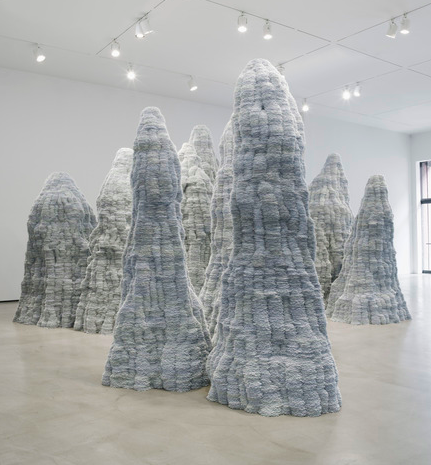 This entry was posted on Saturday, July 19th, 2014 at 12:00 am and is filed under Art News. You can follow any responses to this entry through the RSS 2.0 feed. You can leave a response, or trackback from your own site.