London – Giulio Paolini: “To Be or Not To Be” at Whitechapel Gallery Through September 14th, 2014 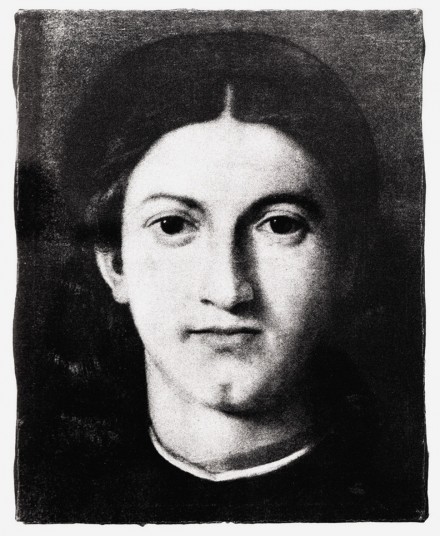 Arte Povera, meaning ‘poor art’ in Italian, contained a profound criticism towards commodification and consumeristic production. Among its key figures stands Giulio Paolini, who was invited to Arte Povera’s first exhibition by art historian Germano Celant.  But Paolini also occupies a separate position in terms of focusing on a noticeably historical examination of the artistic state in turn. Related to his critical approach towards production dynamics in art, Paolini on the other hand has been investigating the duality between the seer and the seen, questioning the exchange not only between the artwork and the viewer but also between the subject matter and the artist. 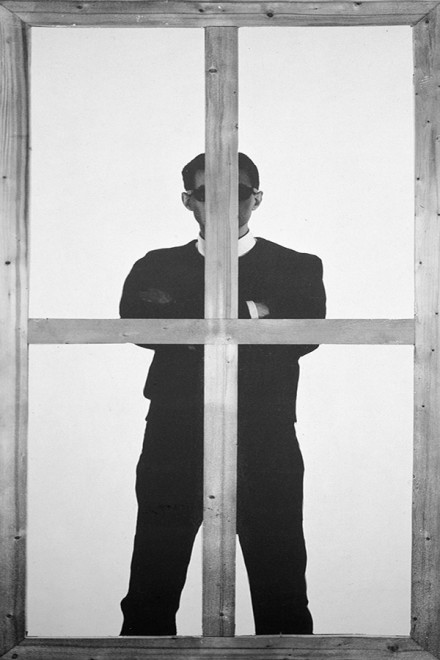 Paolini’s arguably the most famous work, Young Man Looking at Lorenzo Lotto, fits this qualification perfectly.  The artist’s reproduction of Lotto’s Portrait of a Young Man, twists the notion of the gazer and the gazed, and sits at the center of Whitechapel’s current retrospective of the Genovese artist.  Titled Giulio Paolini: To Be or Not To Be, the exhibition expands  the artist’s five decade career through a selection of various mediums and genres, ranging from paintings to installations. Humor plays a significant role in Paolini’s practice, and emerges from witty ironical accents the artist imposes on his works. As evident in the Lorenzo Lotto appropriation, the irony in the artist’s choice of title mocks the ritualistic aspect of portrait making—the painter looking at his model— and suggests the voyeuristic eye of the model targeting the painter, or in a further reading, us the viewers. 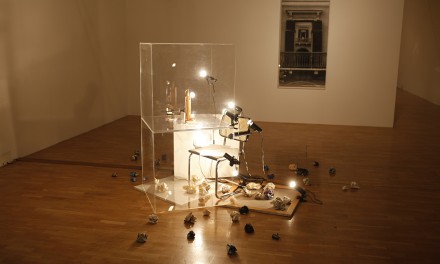 Approaching the physicality of a painting as a subject matter to contemplate on, Paolini urges viewers and artists alike to dismantle the components of a painting beyond what is visible or tangible. What the artist calls “the space of a painting” is this exploration of the extensions a painting can (or cannot) reach aside from the limitations of the canvas and the pigment. The most evident fruit of this study is Delpho, a large scale combination of photography and painting, presenting a black and white photograph of the artist wearing dark sunglasses hiding behind an actual canvas stretcher.  The viewer must decide the position that they themselves take in relation to the artist, whether they are on the artist’s side of the canvas, or if they are the canvas themselves. 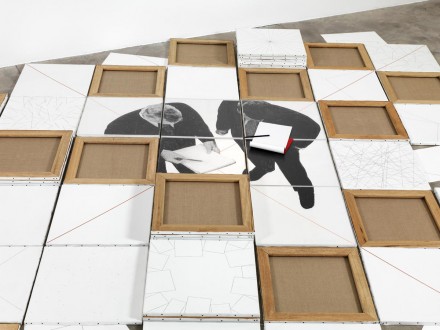 The way the artist positions himself inside the painting, physically present yet with his face blocked by the presence of the wooden stretcher, proposes Shakespeare’s or Barthes’ arguments related to the boundaries of existence and omnipresence, both as an individual and a creator.  Similarly, Big Bang, an installation from the 90’s containing an empty seat suggesting the presence of the artist, crumpled sheets of paper showcasing different ideas going into refuse and an easel standing out as the symbol of artistic creation, embodies the dilemmas a creative mind is constantly engaged with, placing an artist’s studio and artistic mind inside a Plexiglass box. 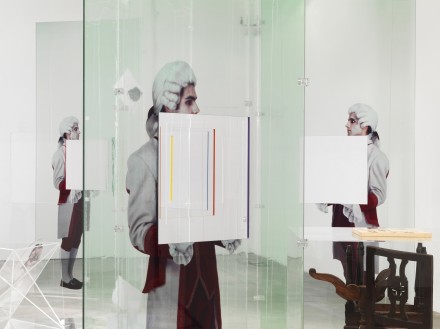 The namesake of the exhibition, To Be or Not To Be is a floor installation composed of fifty-eight, equally-sized square canvases brought together, evoking the premise of a fictional board game. Some face the floor, while others reveal the drawings on their surfaces, while others are stacked together nearby, each one triggering the viewers’ curiosity over the ambiguity of the whole pattern, while complicating a definite reading.  An even larger installation, building an alternative gallery inside Whitechapel is Contemplator Enim, composed of transparent Plexiglass walls with images of 18th century servants holding blank white sheets, an iconography that ridicules the exclusivity that has always been present in the dynamics of the art world, while in turn orchestrating a see-through exhibition space in which nothing but empty pages are being presented.

Giulio Paolini: To Be or Not To Be is on view at Whitechapel Gallery through September 14, 2014.

This entry was posted on Sunday, August 24th, 2014 at 12:00 am and is filed under Art News. You can follow any responses to this entry through the RSS 2.0 feed. You can leave a response, or trackback from your own site.